What you need to know about Frangipane: Raspberry Almond Frangipane Tart

If you like to bake, you definitely want to know about Frangipane because it is such a versatile and delicious filling, which is also easy to make. It is a creamy almond filling with a base of ground almonds and sugar, called TPT (tant pour tant−so much X for so much−or equal parts) in the French pastry lexicon. If you study French pastry, Frangipane will definitely be a basic building block in the lesson plan. I say “building block” because it can be used for so many different purposes. First of all, Frangipane makes a great tart filling when combined with berries or fruit. You simply spread a layer of Frangipane in an unbaked tart shell, filling the shell half full, and then arrange berries or fruit over the top. As the tart bakes, the filling rises up around the fruit creating a delicious mélange of flavors. 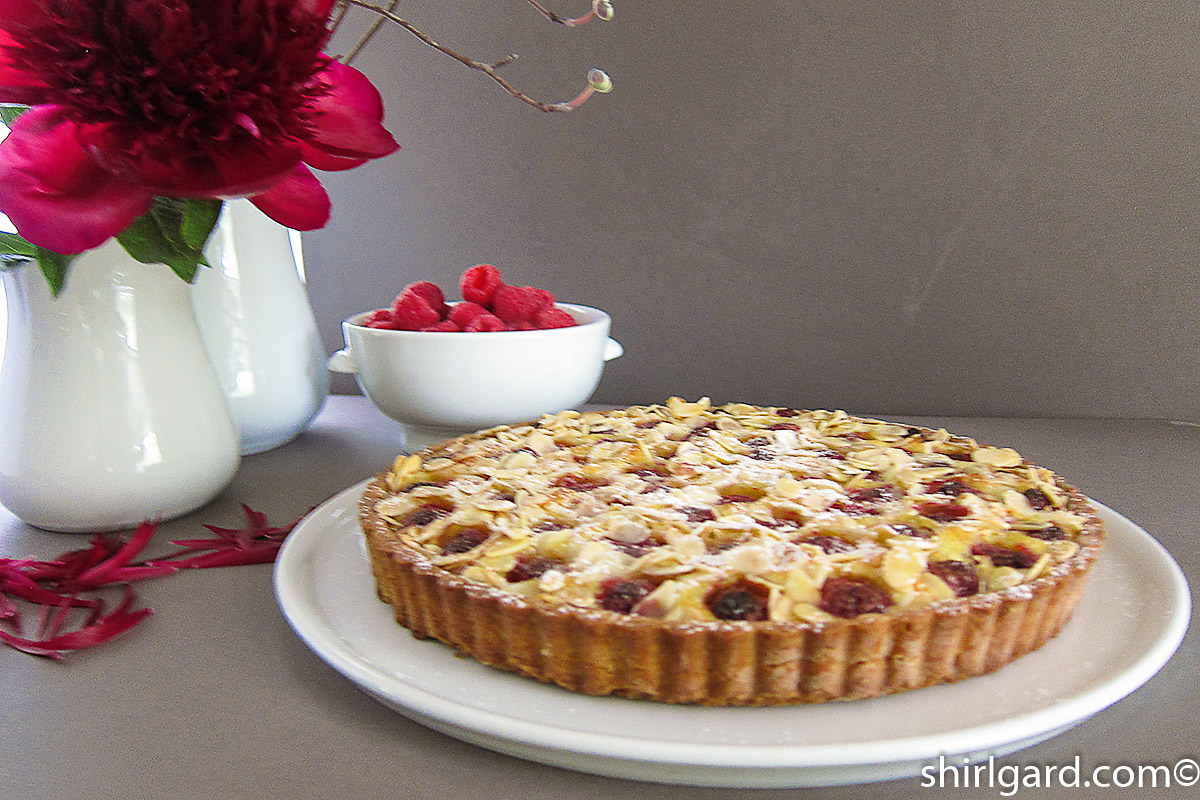 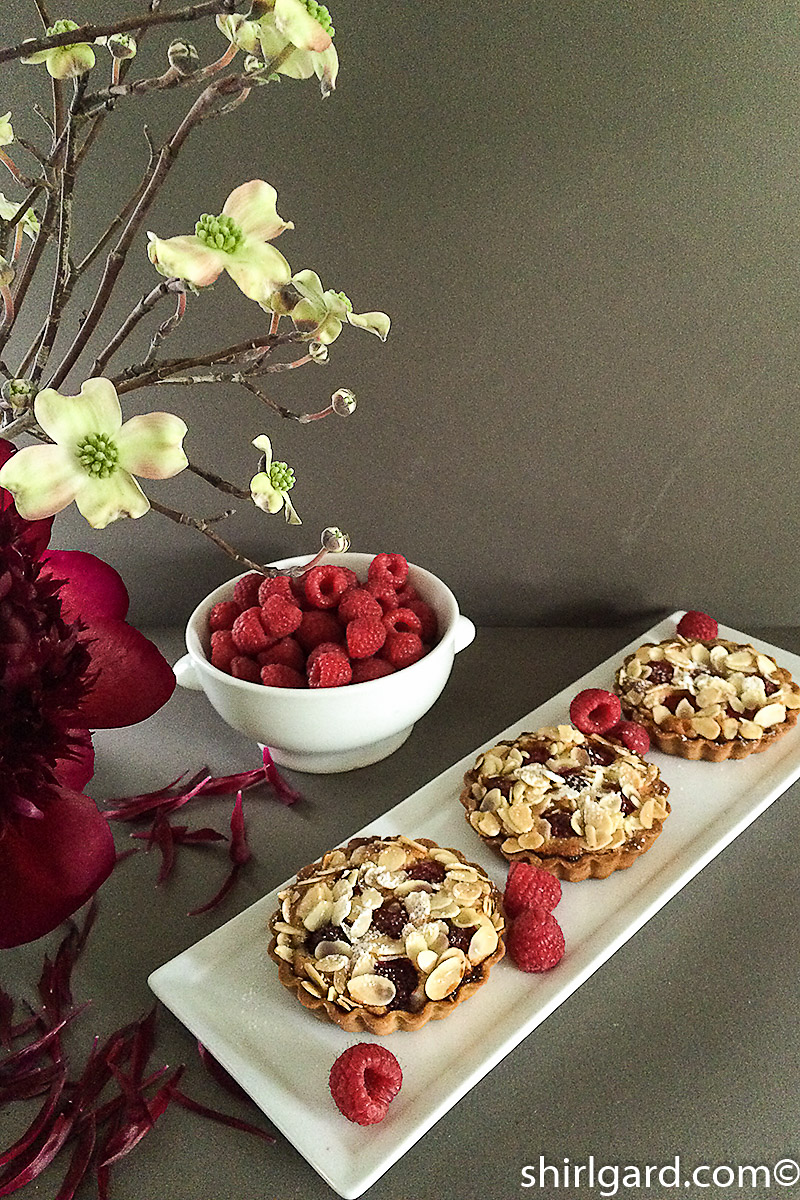 When I was pastry chef at The Old Inn On The Green and the Southfield Store, we always had a whole row of tarts in the pastry case, and you could be sure that at least one or two of those tarts would be some kind of Frangipane Tart: maybe blueberry, blackberry, or raspberry. We had many requests for take-out Frangipane Tarts; it was one of our most popular flavors. But Frangipane is a filling that can be used in many ways other than tarts−such as breakfast pastries or coffee cakes−but it also the filling in many classic French pastries. 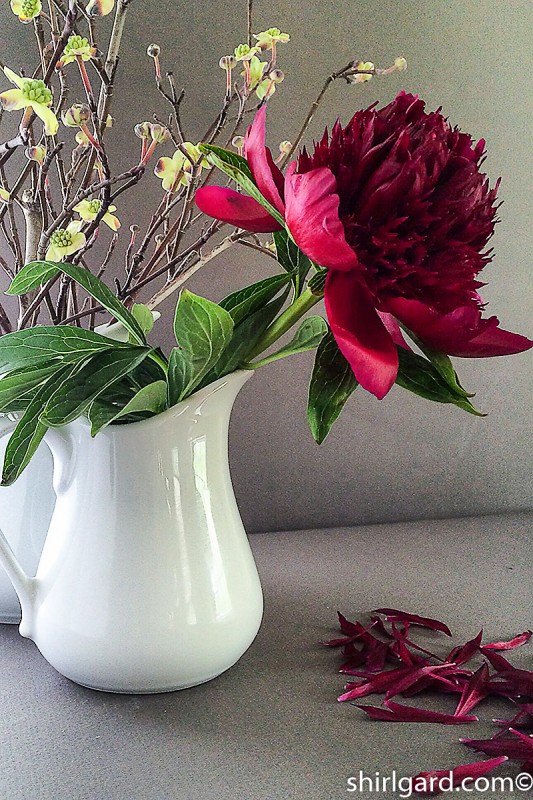 One such pastry is the Pithivier, a beautiful combination of golden puff pastry and Frangipane. I like the story about it on Kitchen Inspirational; you might like it too. Frangipane is also the filling in the French la Galette des Rois or King’s Cake. Frangipane is a traditional food associated with the Christmas holidays in France.

Although Frangipane is a French pastry preparation, its history goes back to 16th century Italy, when, of all things, an Italian nobleman, Marquis Muzio Frangipani, created almond-perfume scented gloves (why would you want those?). Nevertheless, almonds and Frangipani would forever be linked. Pastry chefs, seeing the popularity of the almond scent, captured it in a dessert that would become known as Frangipane. The earliest modern spelling of the word appeared in a 1732 French confectioners’ dictionary. 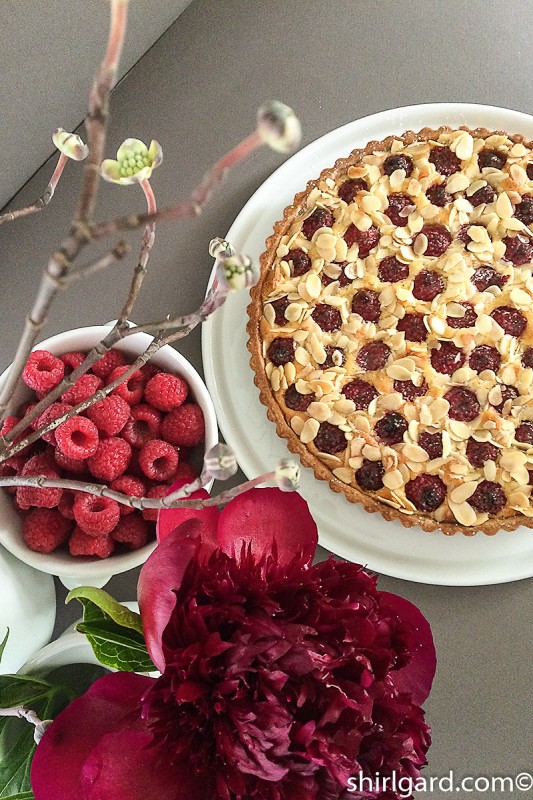 There are several ways to pronounce this word: 1) FRAN-jup-payn 2) FRAWN-zhee-pan 3) Frangipani. I have always called it FRAWN- jup-payn, but I noticed that Martha Stewart called it Frangipani on one of her episodes of Martha Bakes on PBS. I say “Take your pick.” Also, check out this source about Frangipane, which is where I found the pronunciations: food.com.

There are many recipes for Frangipne, but the recipe I like best is the one that I learned to make years ago in cooking school: The Institute of Culinary Education or ICE, formerly known as Peter Kump’s New York Cooking School. I’ve made this recipe hundreds of times so I feel confident about sharing it with you in this post.

If you would like to make a larger batch of Frangipane, use this recipe.  Click on Thick Raspberry Sauce for a sauce to serve with the tarts. Click here for the recipe for Almond Sablé Tart Shells.

Spread Raspberry Preserves and Frangipane in the unbaked tart shell: 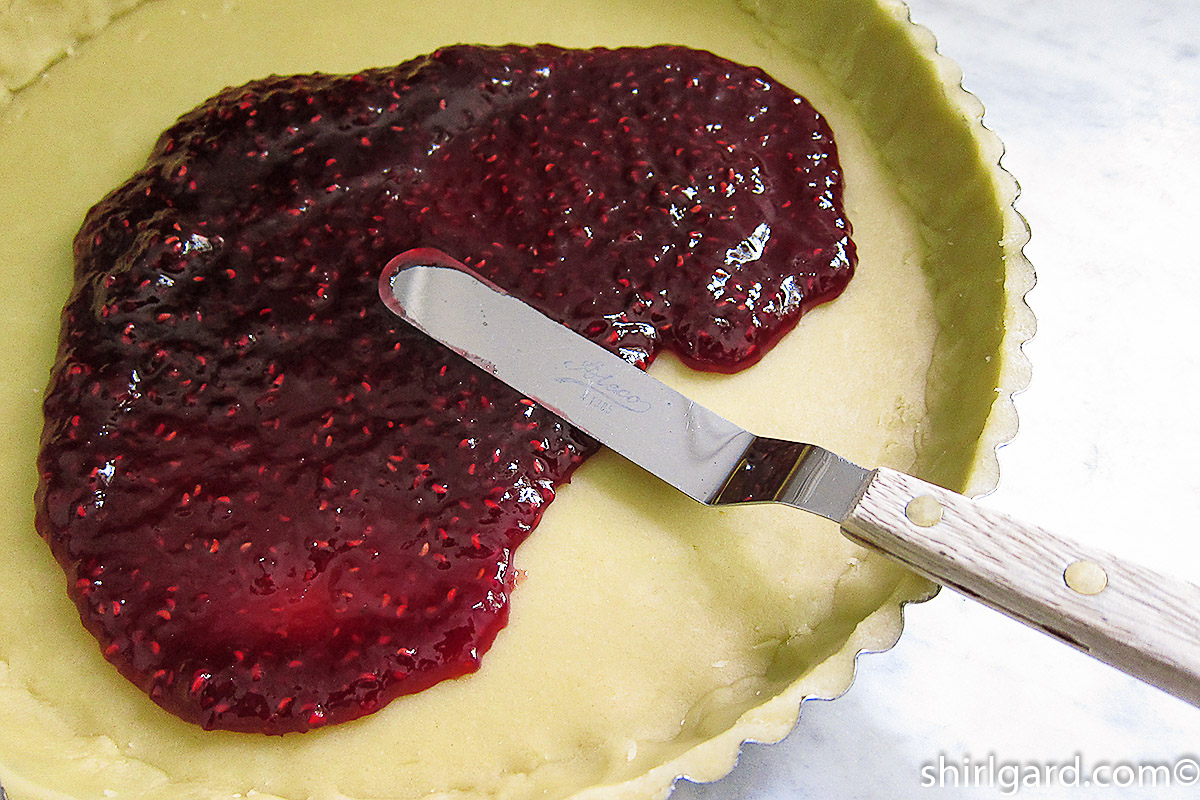 Spread layer of Raspberry Preserves in bottom of tart shell. 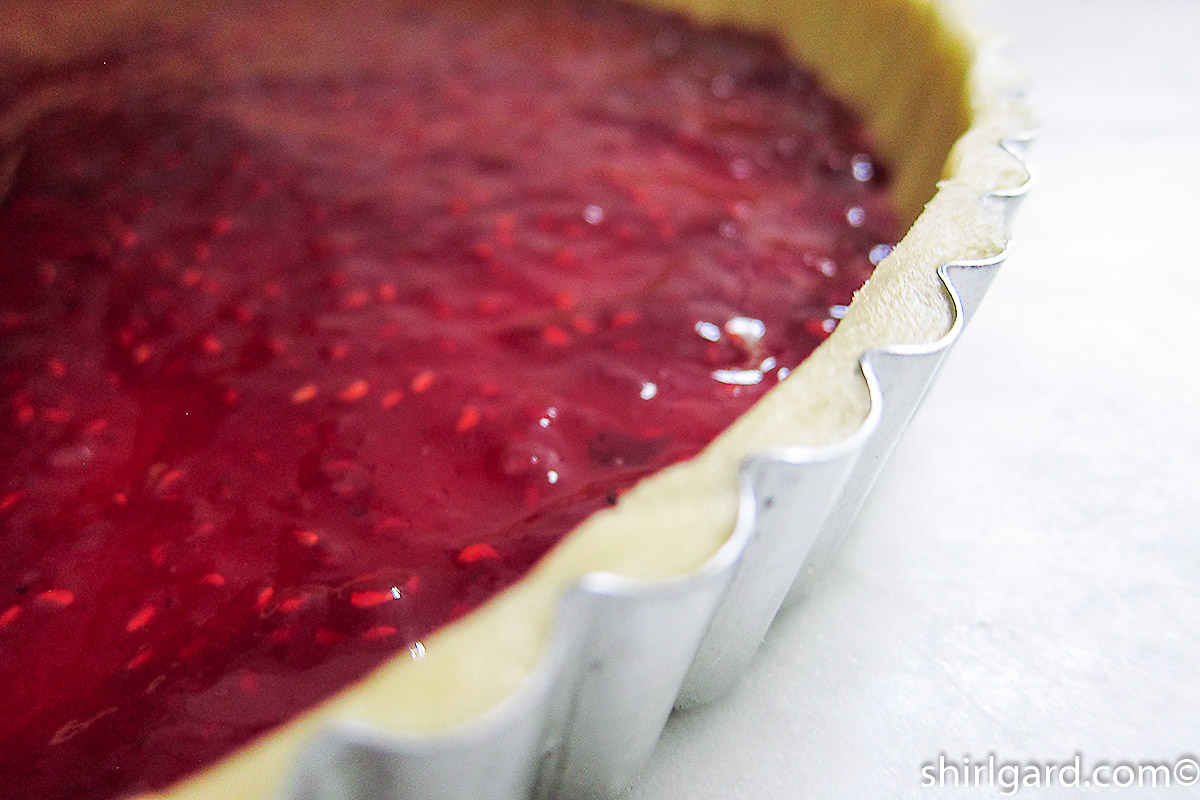 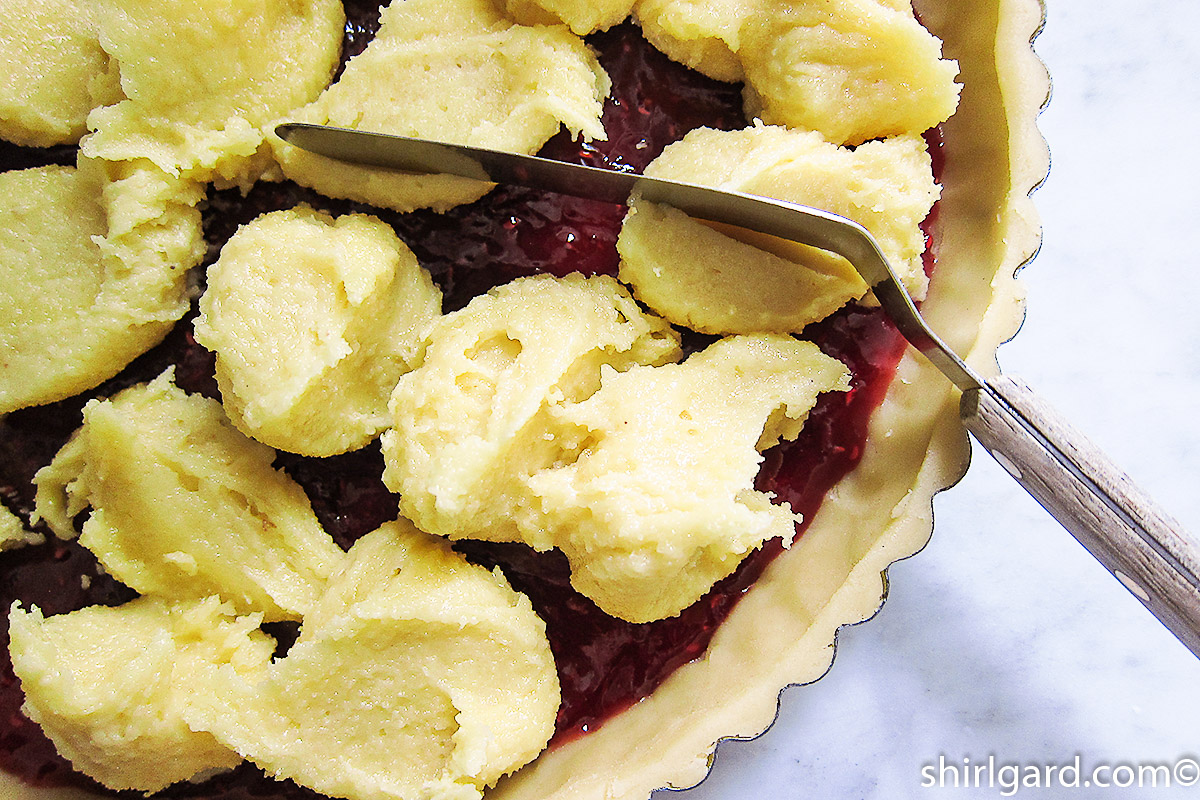 Place dollops of Frangipane over the preserves, which makes it easier to spread. 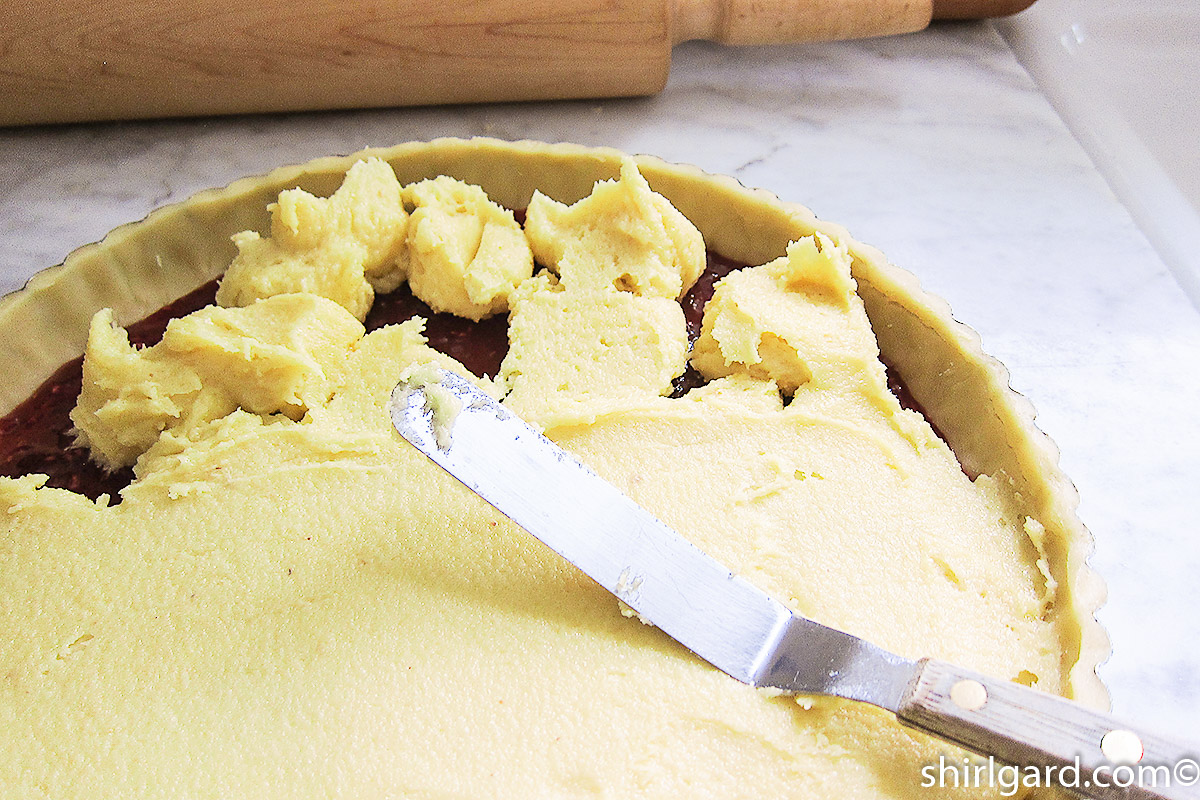 Spread the Frangipane in an even layer.

Arrange the Raspberries and Sliced Blanched Almonds over the Layer of Frangipane: 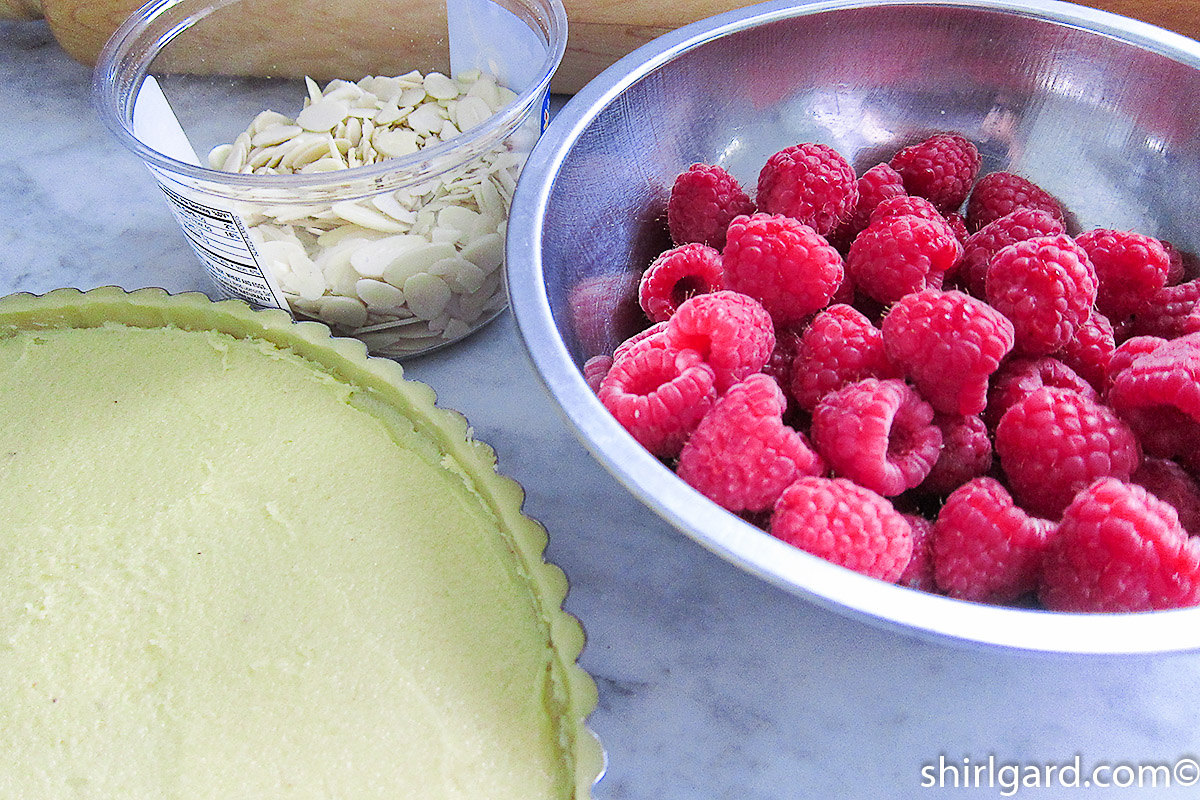 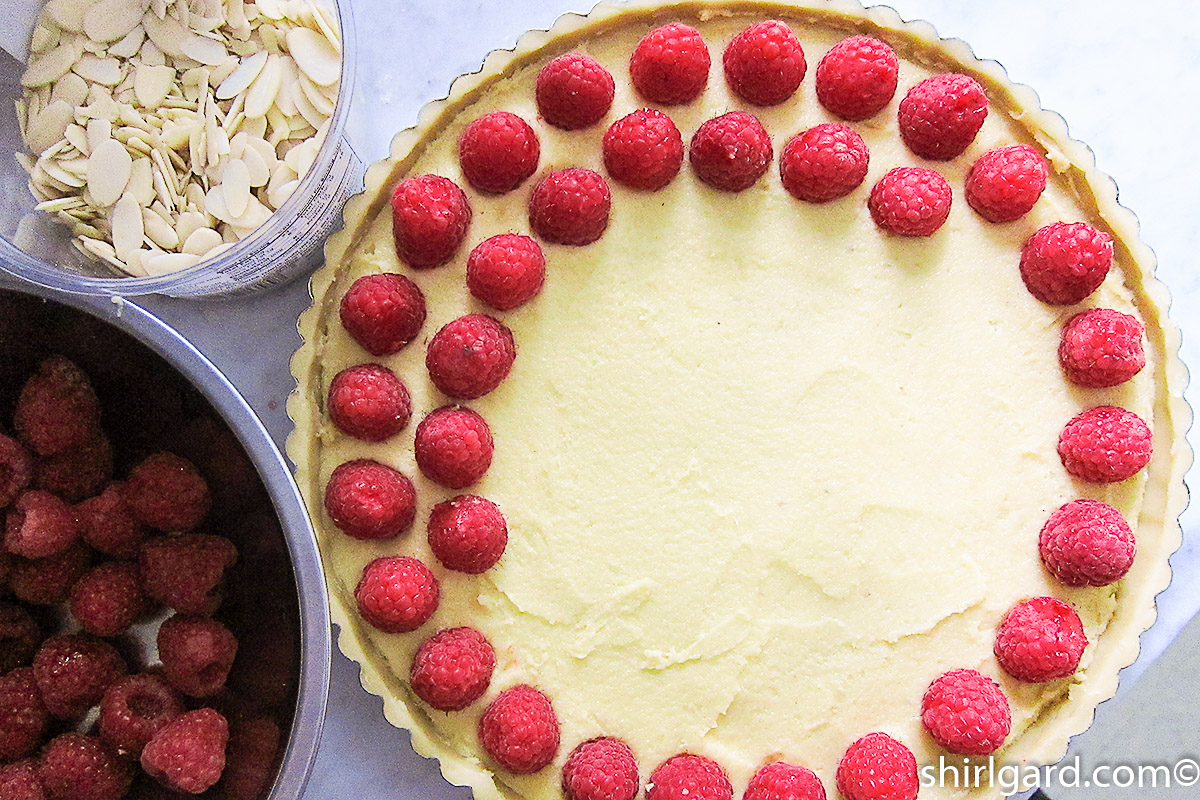 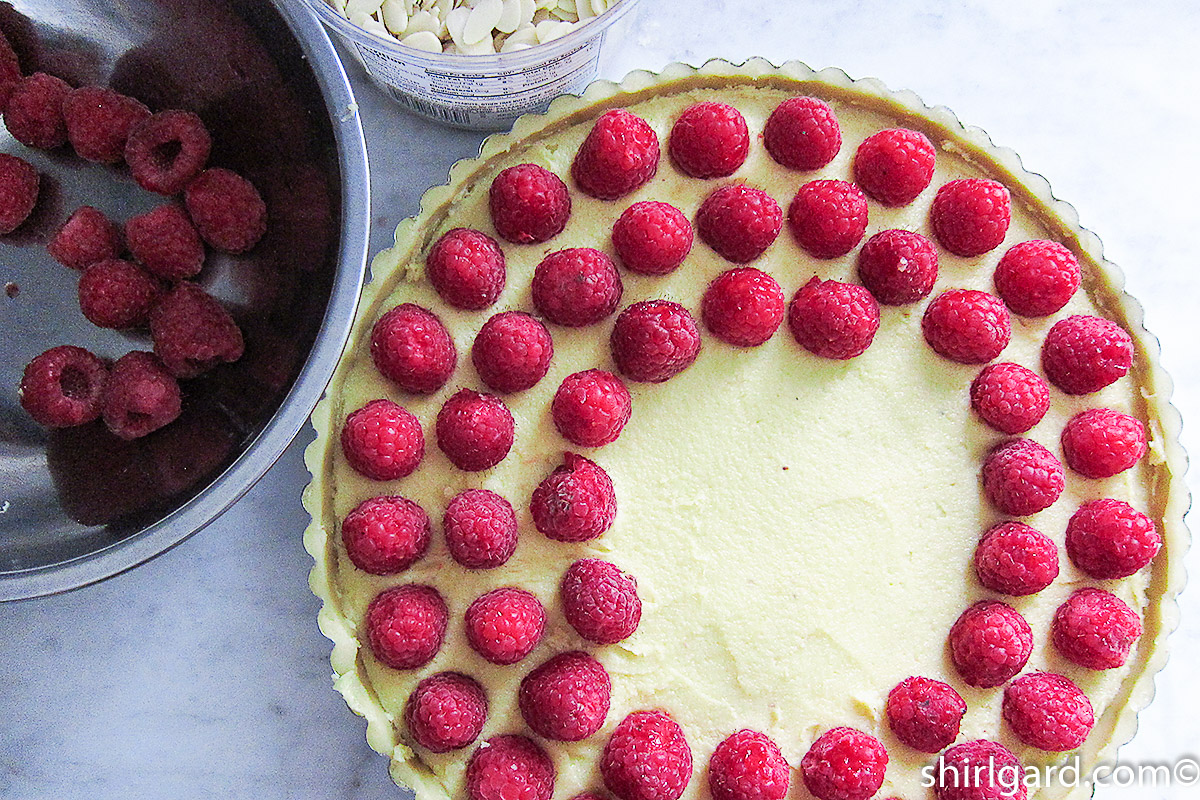 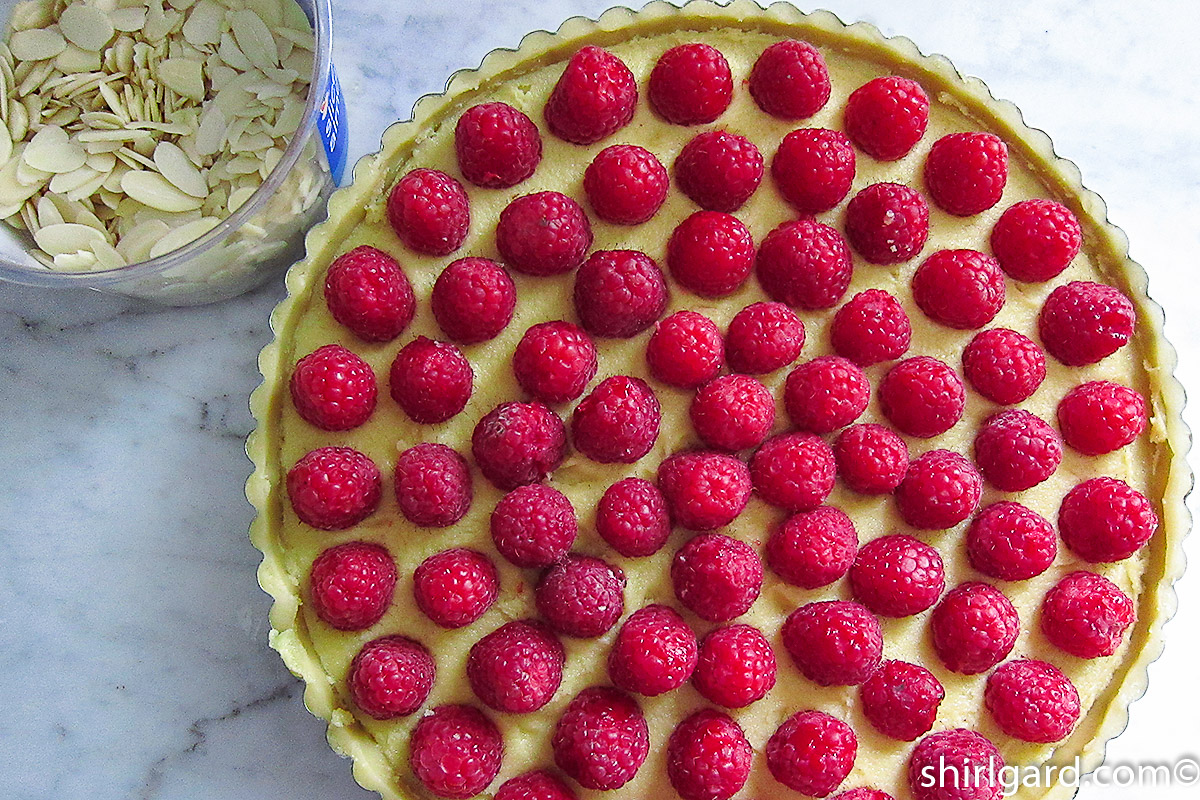 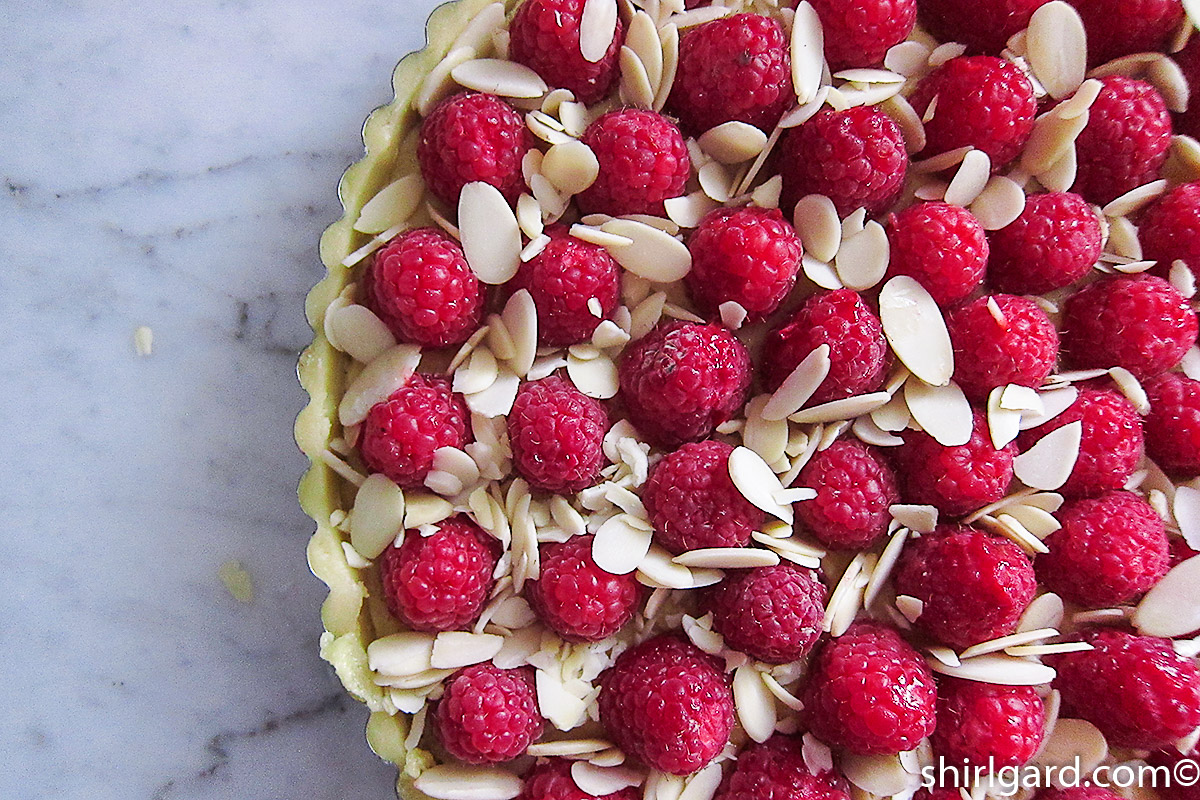 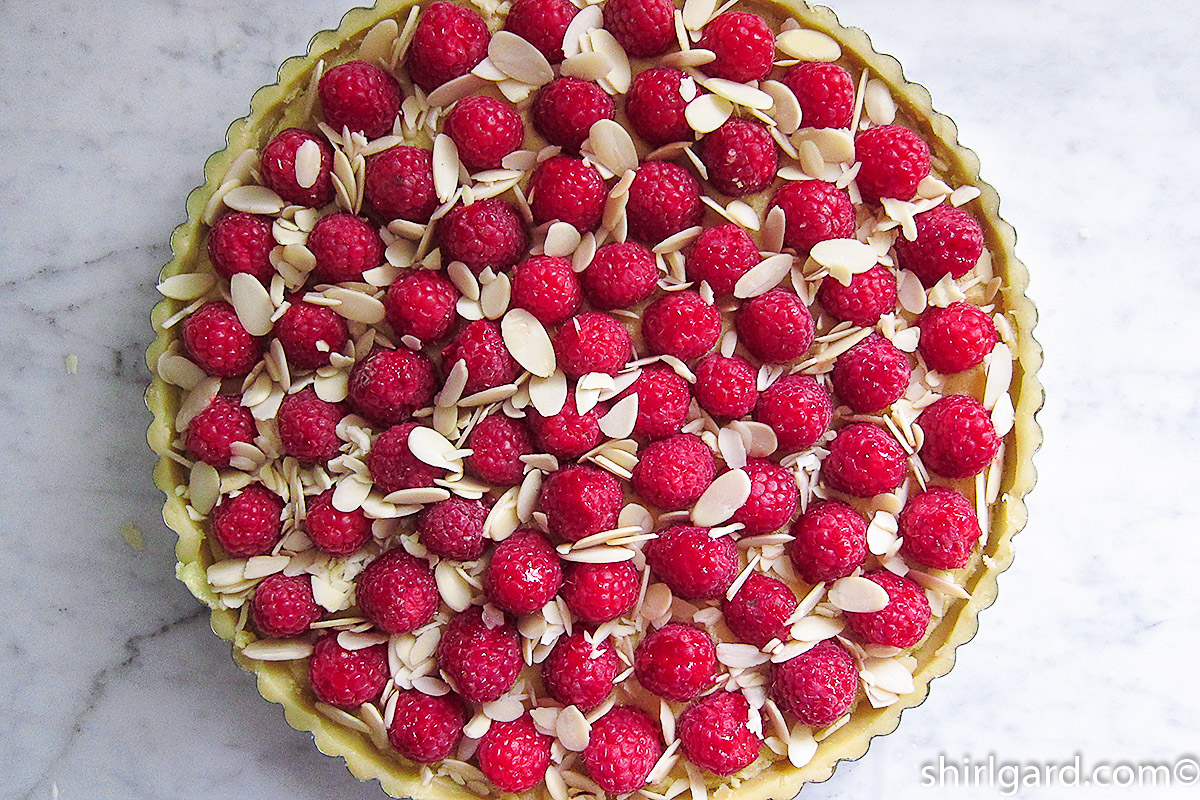 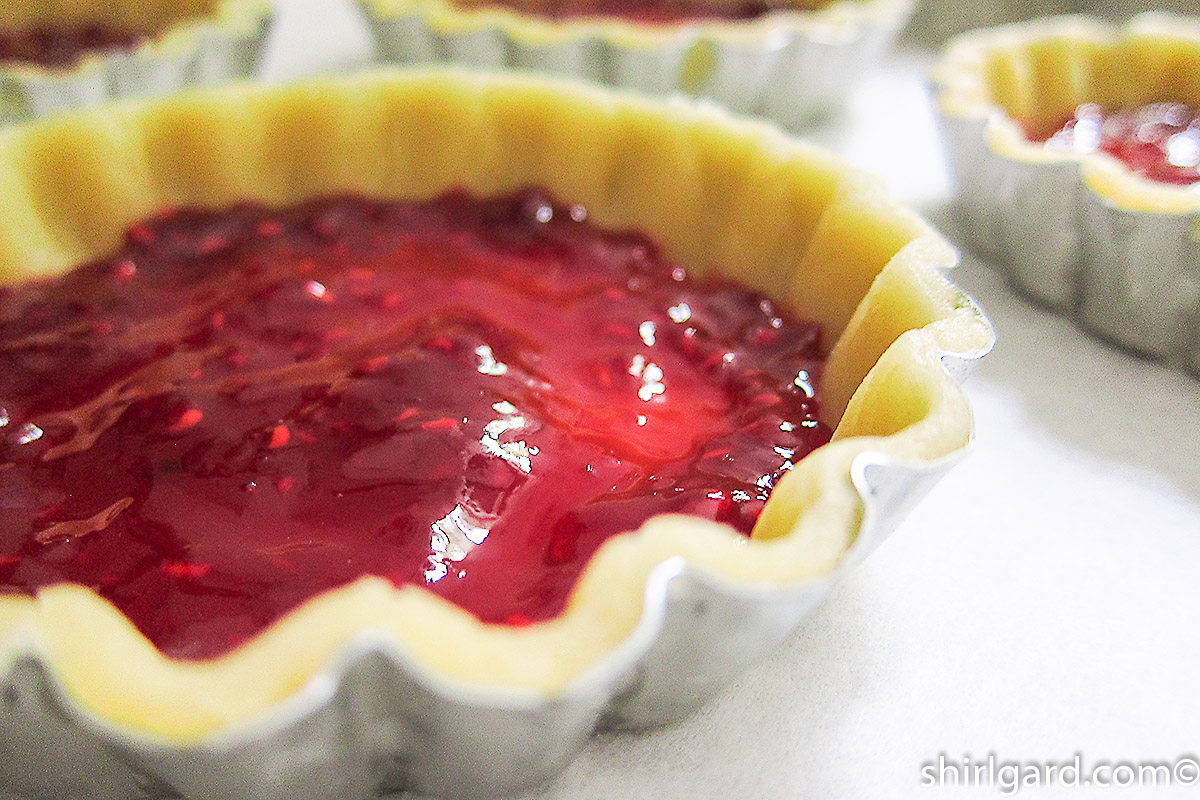 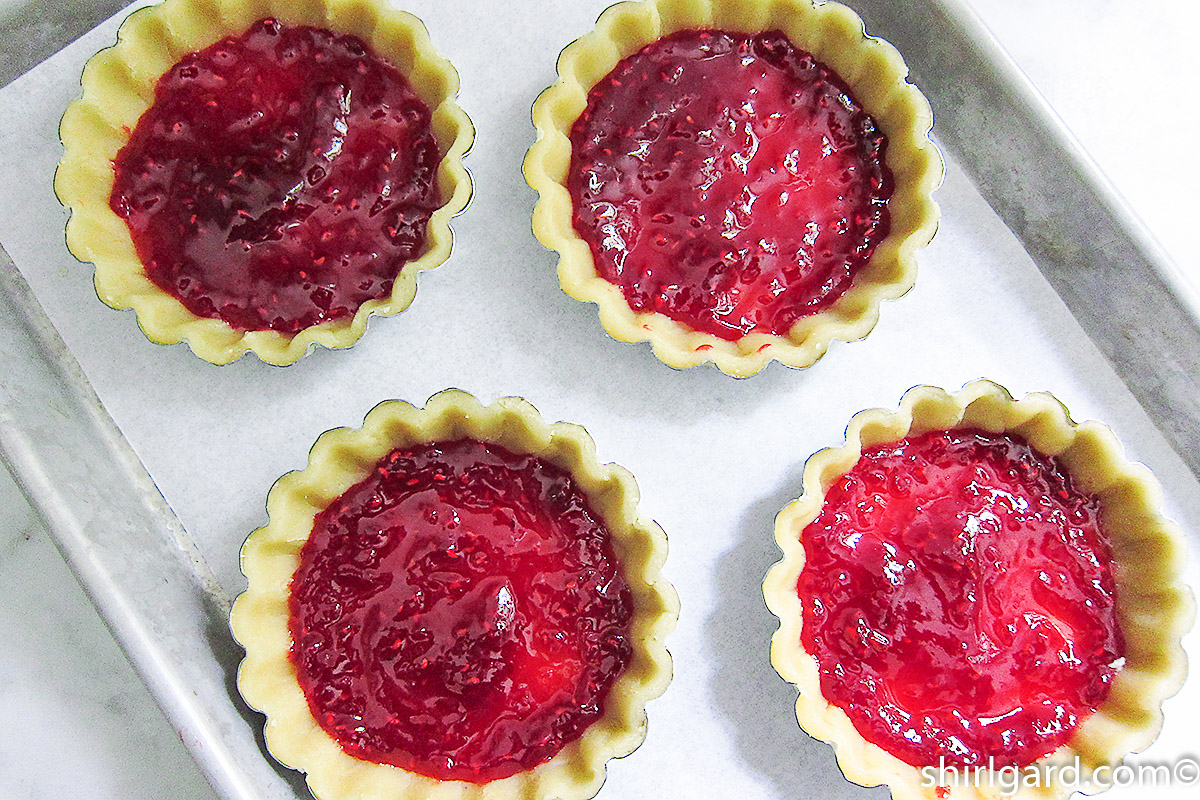 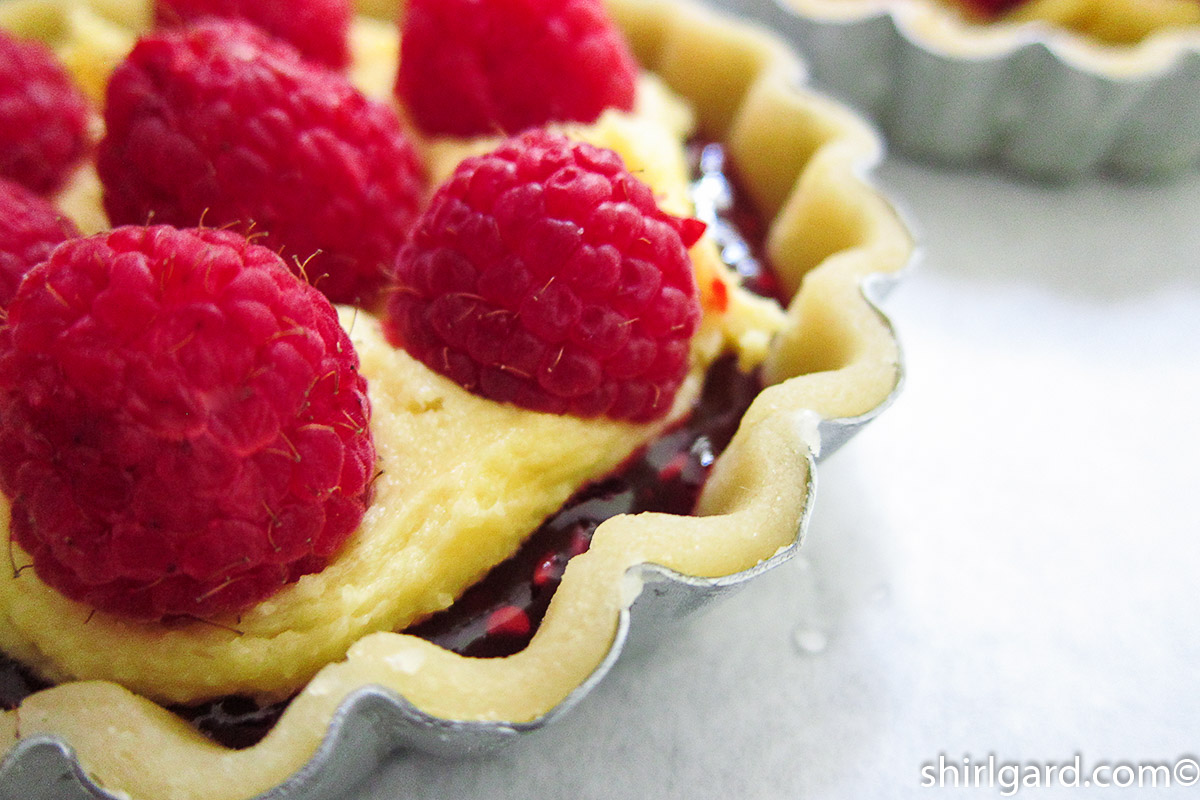 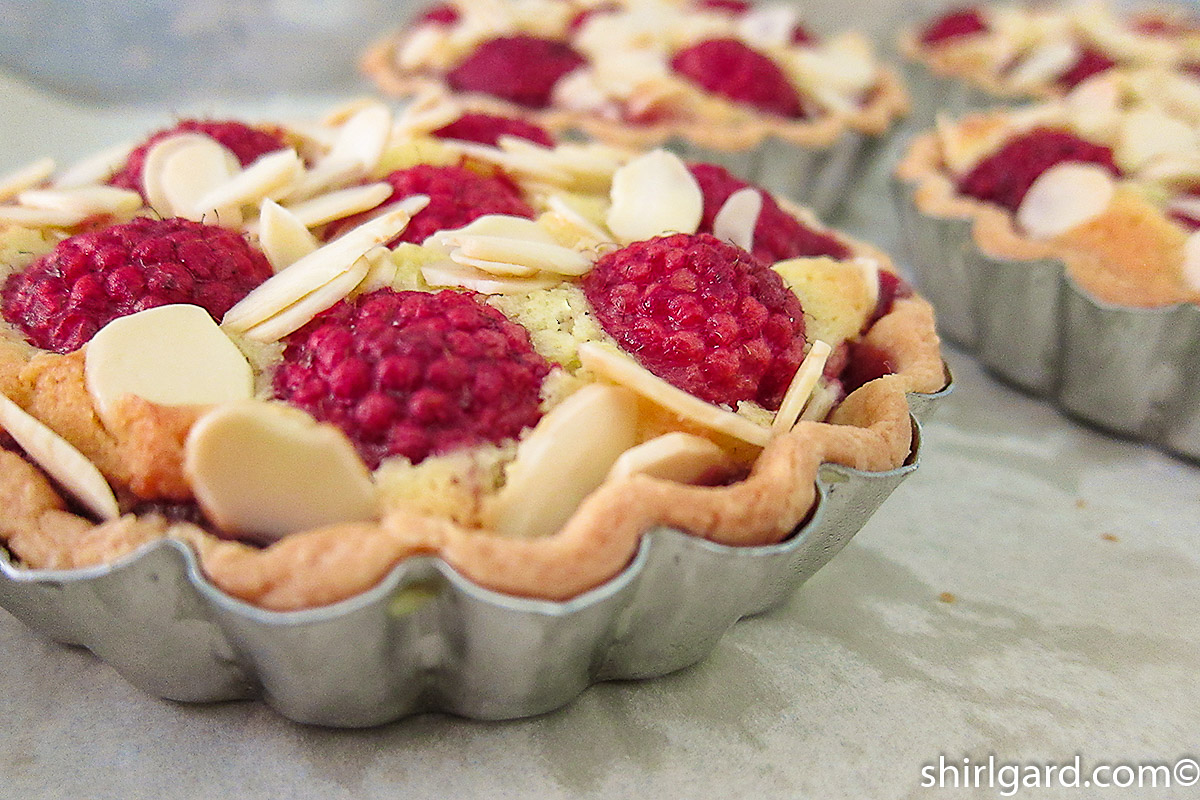 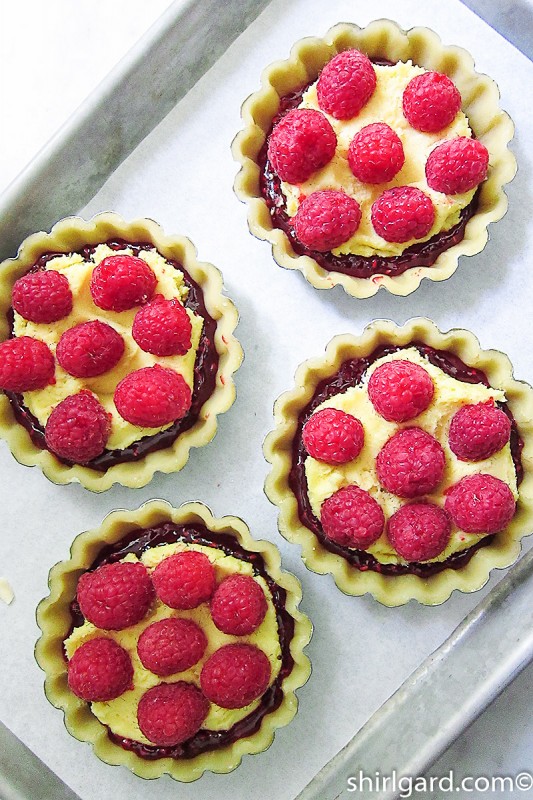 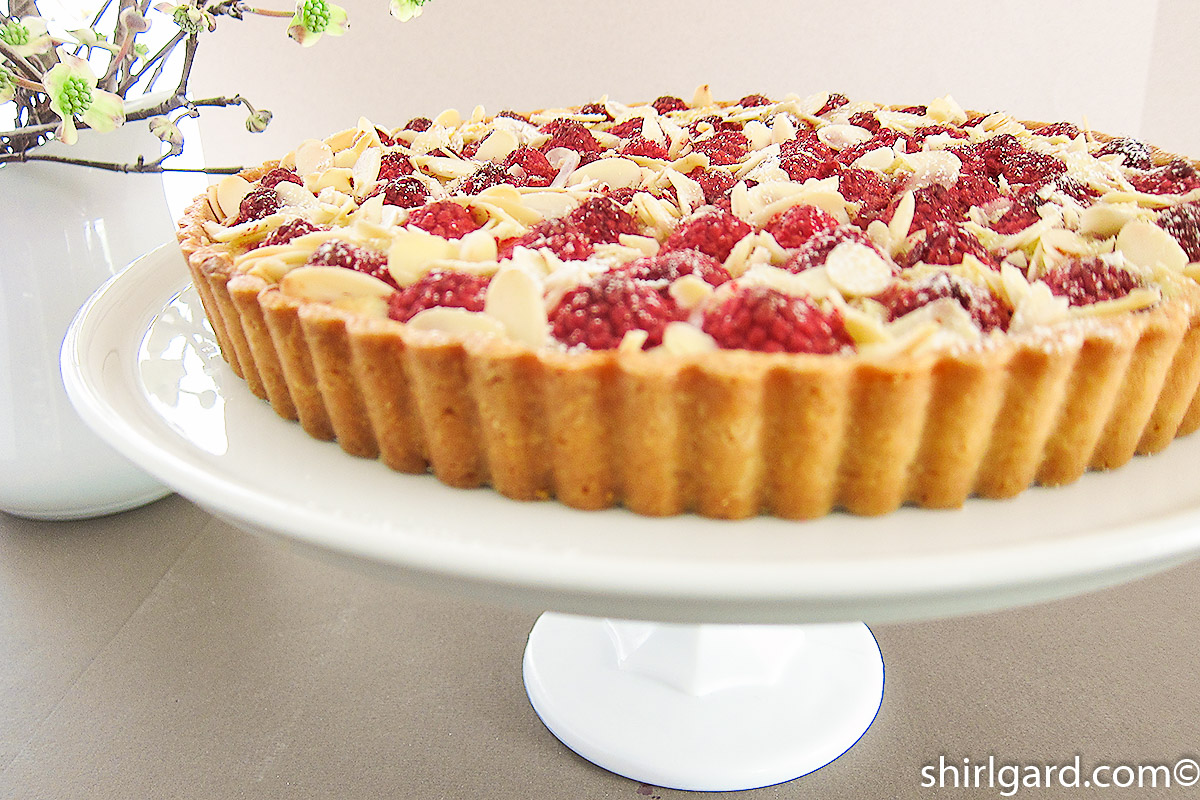 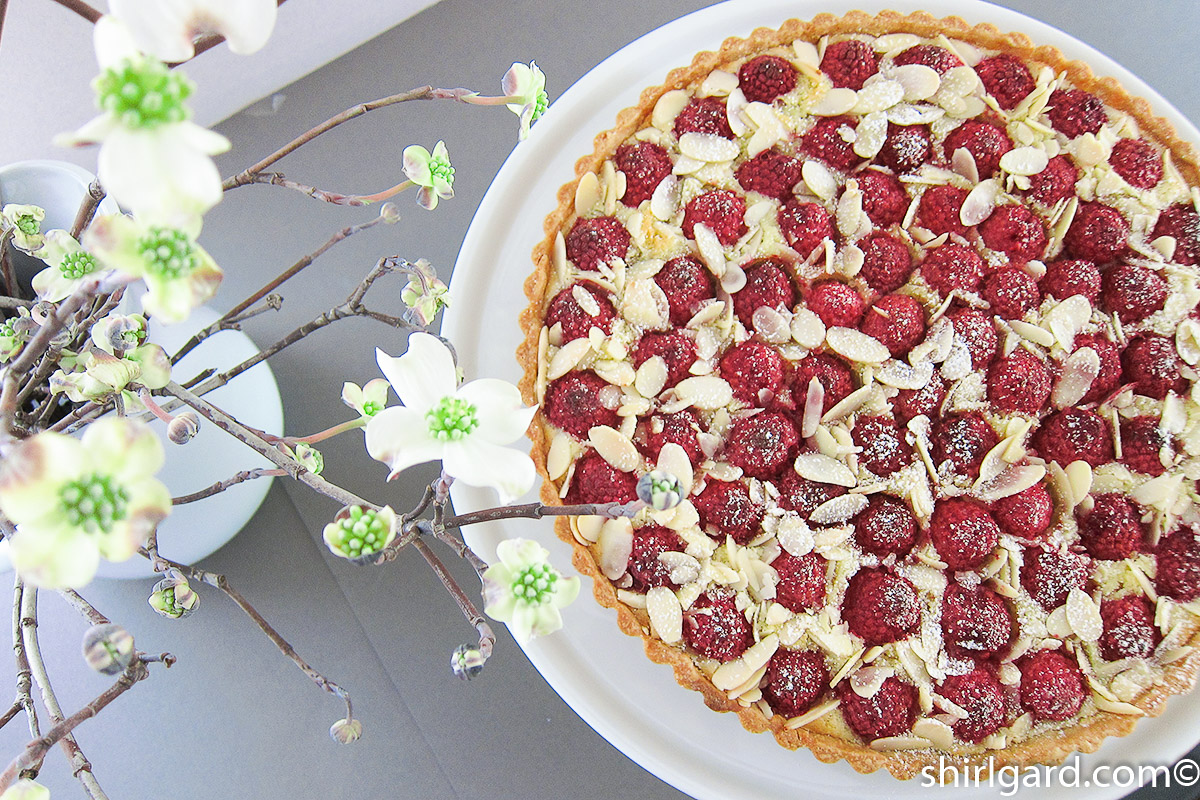 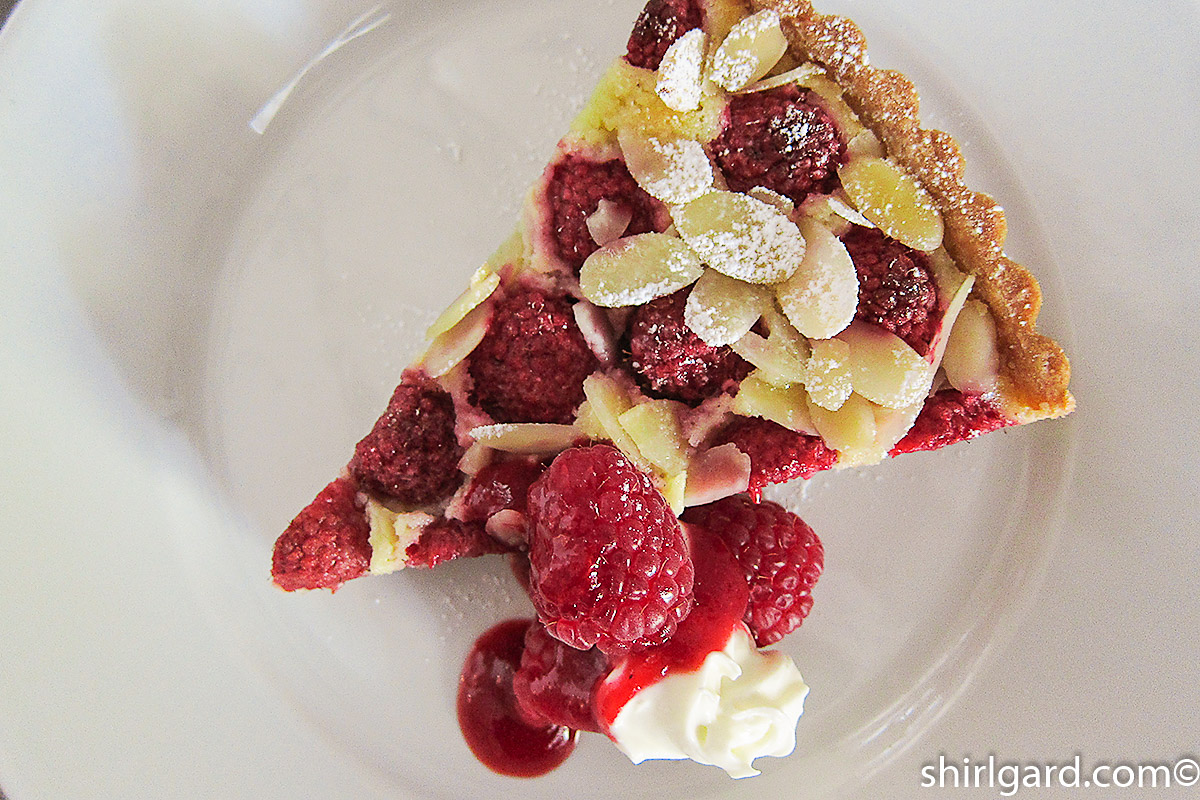 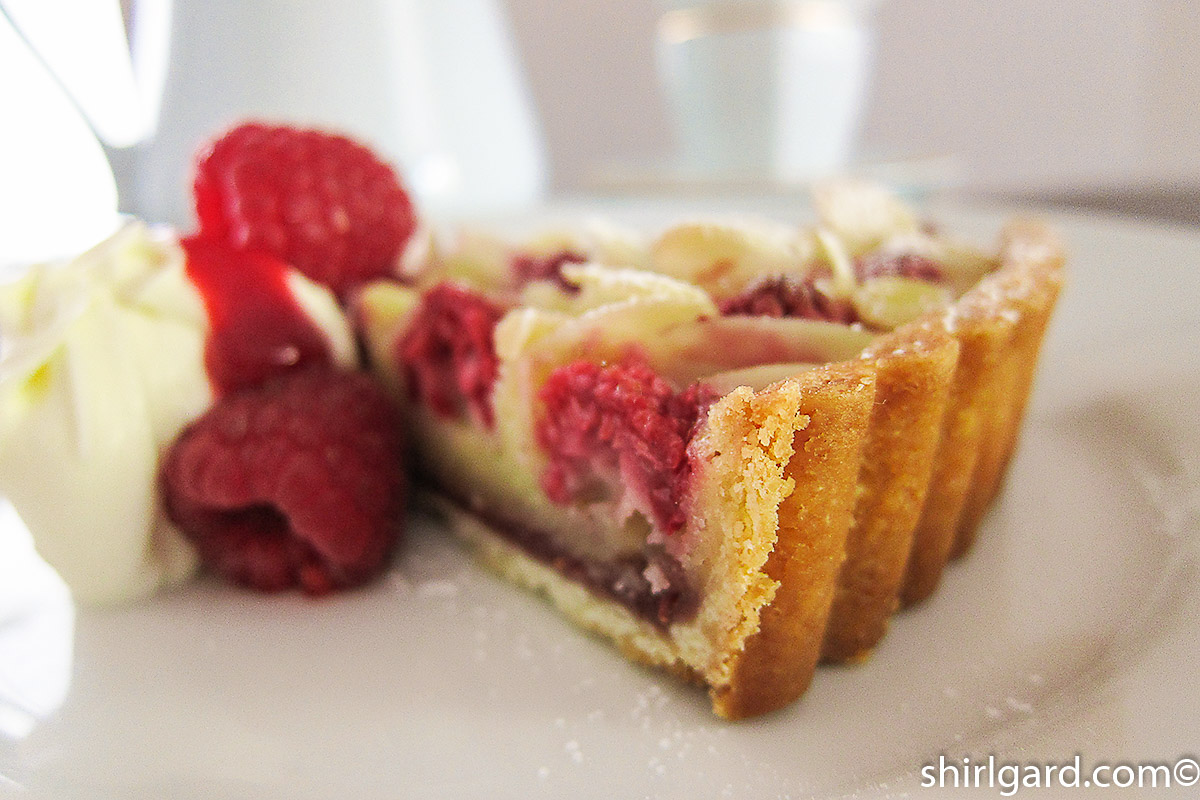 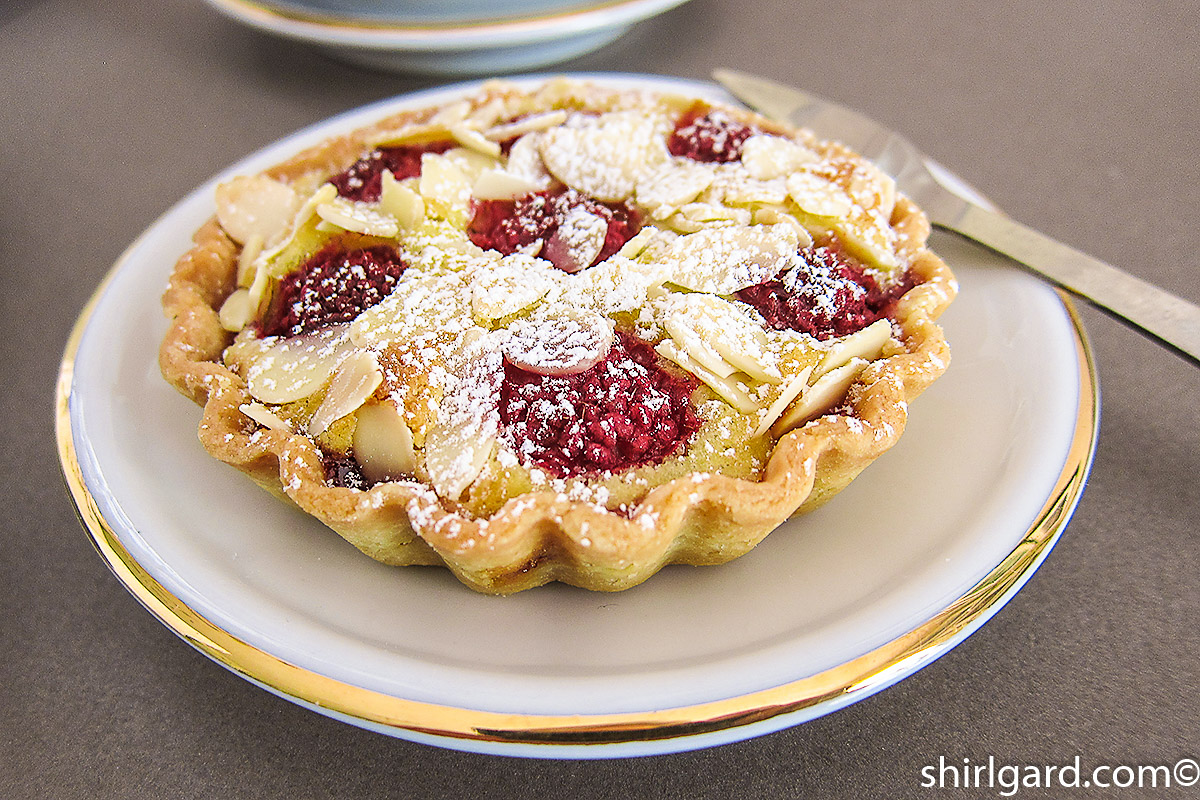 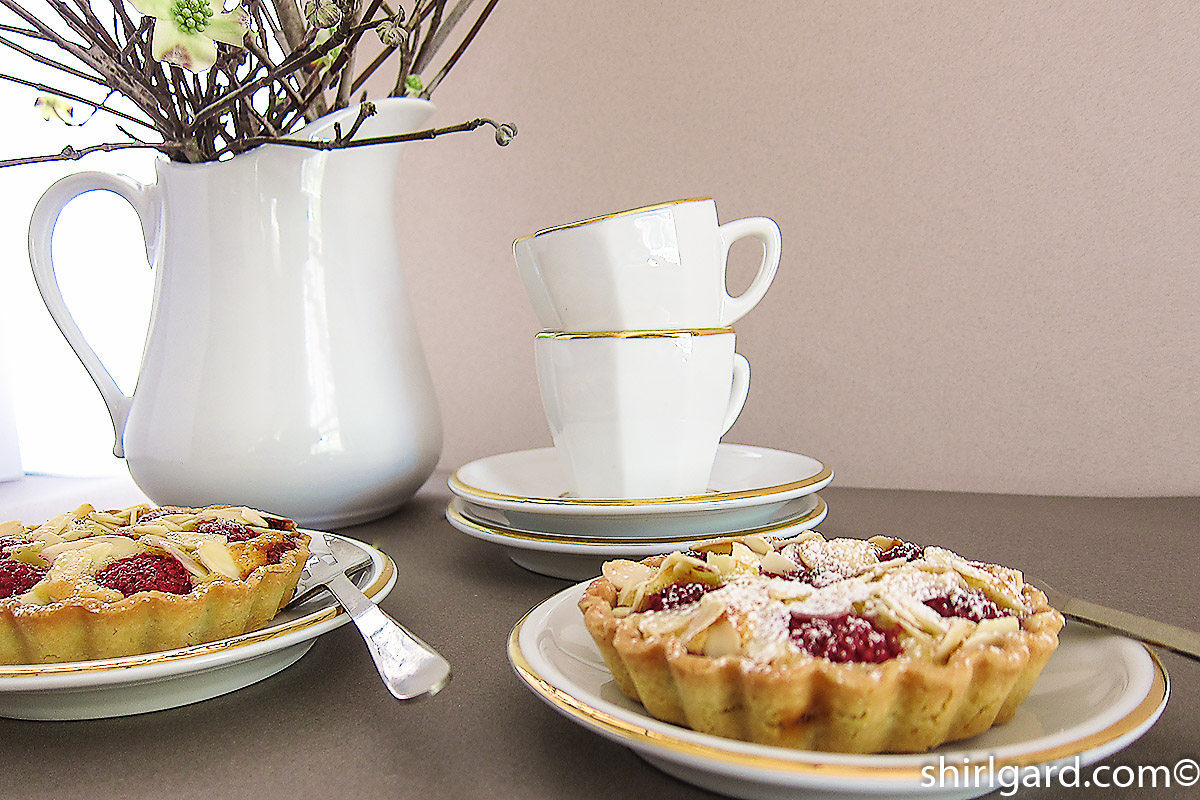 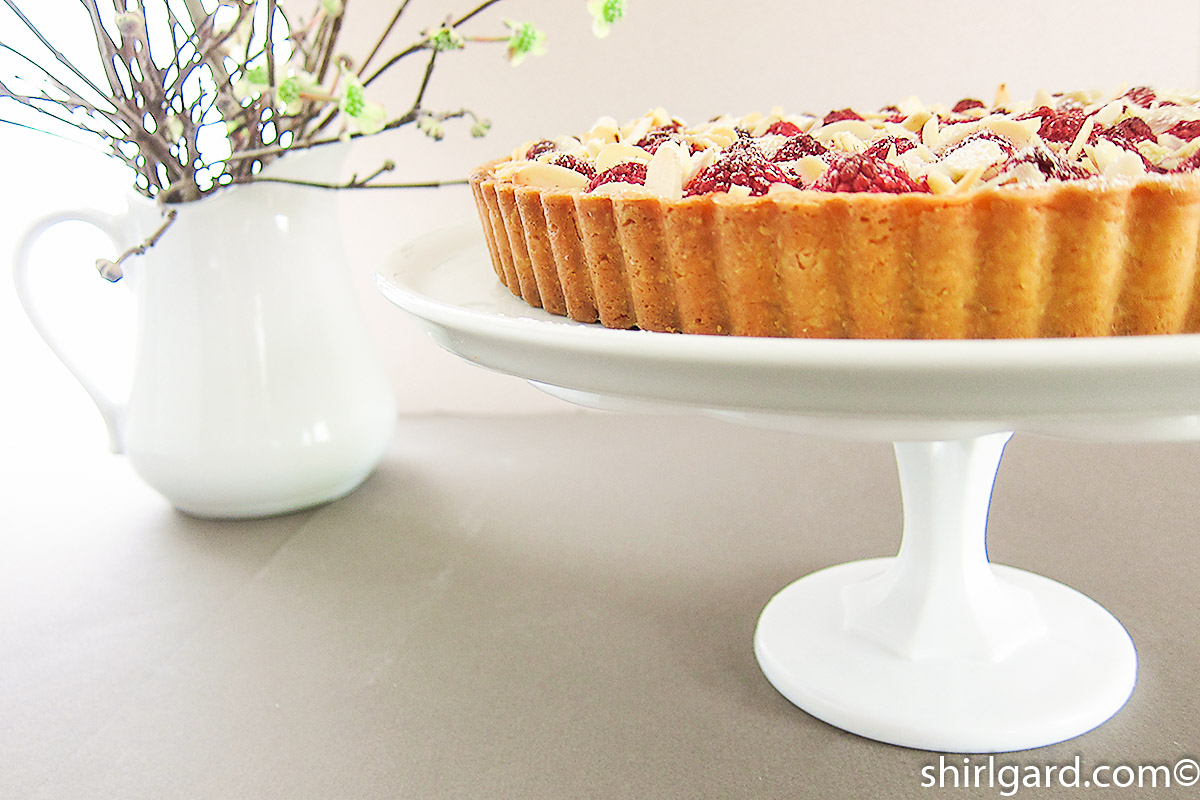 AUTHOR: Shirl Gard
This is a recipe that I learned to make in cooking school (Institute of Culinary Education or ICE, formerly Peter Kump's New York Cooking School) and I've been making it ever since. Frangipane is one of those classic French pastry preparations, made with a finely ground mixture of half almonds and half sugar. This blend of almonds and sugar is known as TPT (tant pour tant) in French pastry-speak, which translates as "so much X for so much" or equal amounts. It can be made with different nuts such as walnuts or pecans, although almonds are the most common, and it is usually made with powdered sugar. Here I use blanched almonds and granulated sugar. Frangipane is a very versatile tart filling. You can use it with almost any kind of fruit: stone fruit such as peaches, plums, or cherries are all good. If using harder fruit such as apples or pears, it is better to poach them first unless they are sliced very thin. I've used fresh raspberries in this recipe, but blueberries or blackberries work well also; strawberries are a little too water-y for this recipe. You also have the option of using individually quick frozen (IQF) berries. But, best of all, Frangipane, with its combination of nut and fruit flavors, is simply delicious. 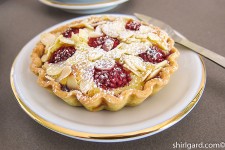