My secret tip for a silky-smooth pudding: Old-Fashioned Chocolate Pudding

I had this pudding for dessert at lunch about twenty years ago and never forgot it. The lunch was at a restaurant called “An American Place” in New York City, owned by Larry Forgione. His cookbook, by the same name, had just been published and I bought a copy that day at the restaurant. The chef signed my book with this: “Celebrating the flavors of America”, which pretty much describes the concept of the restaurant. All of the food was good but I was focused on the desserts like this chocolate pudding. Later, when I opened the book, I went directly to the chapter titled simply “Old-Fashioned Desserts”. I felt extremely lucky when I discovered that the recipe for Old-Fashioned Double Chocolate Pudding was included. But there was more: Blackberry and Apple Crisp, Old-Fashioned Strawberry Shortcake (since it’s strawberry season, this will be my next post). Apple Pandowdy, and Granny’s Chocolate Cake, just to name a few. I’ve made a lot of fancy desserts in my career, but these truly old-fashioned desserts really grab me, right in the heart, and just beg me to make them. Guess I’m just an old-fashioned girl. 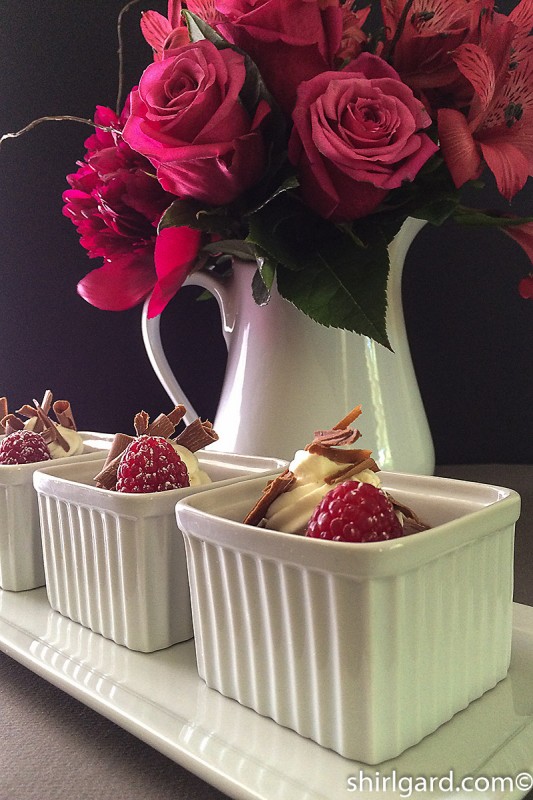 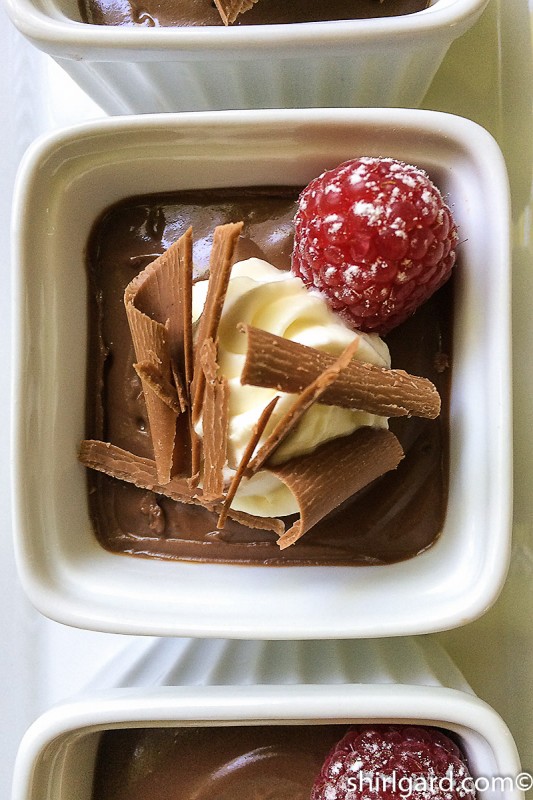 My chocolate pudding recipe is adapted from that recipe, although it has been tweaked over the years, primarily to make it more chocolate-y by adding a teensy bit more cocoa powder and chocolate. I like a chocolate pudding to be shiny, glossy, and silky-smooth on the tongue. From making it so many times as a pastry chef, I stumbled onto the secret to getting this result and it is this:

USE A HAND BLENDER:
JUST BEFORE SERVING OR PUTTING INTO RAMEKINS, USE A HAND-BLENDER TO EMULSIFY THE PUDDING. THIS IS THE SECRET TIP THAT WILL PRODUCE THAT SHINY, SILKY TEXTURE. THE BOWL ON THE LEFT IS BEFORE BLENDING; THE TEXTURE IS ROUGH. THE BOWL ON THE RIGHT SHOWS THE SILKY-SMOOTH TEXTURE THAT YOU GET BY USING THE HAND BLENDER. 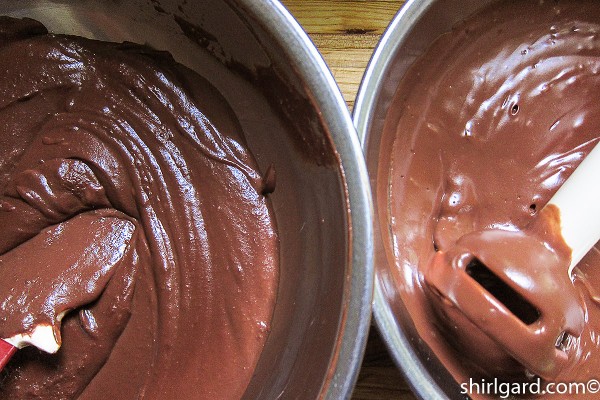 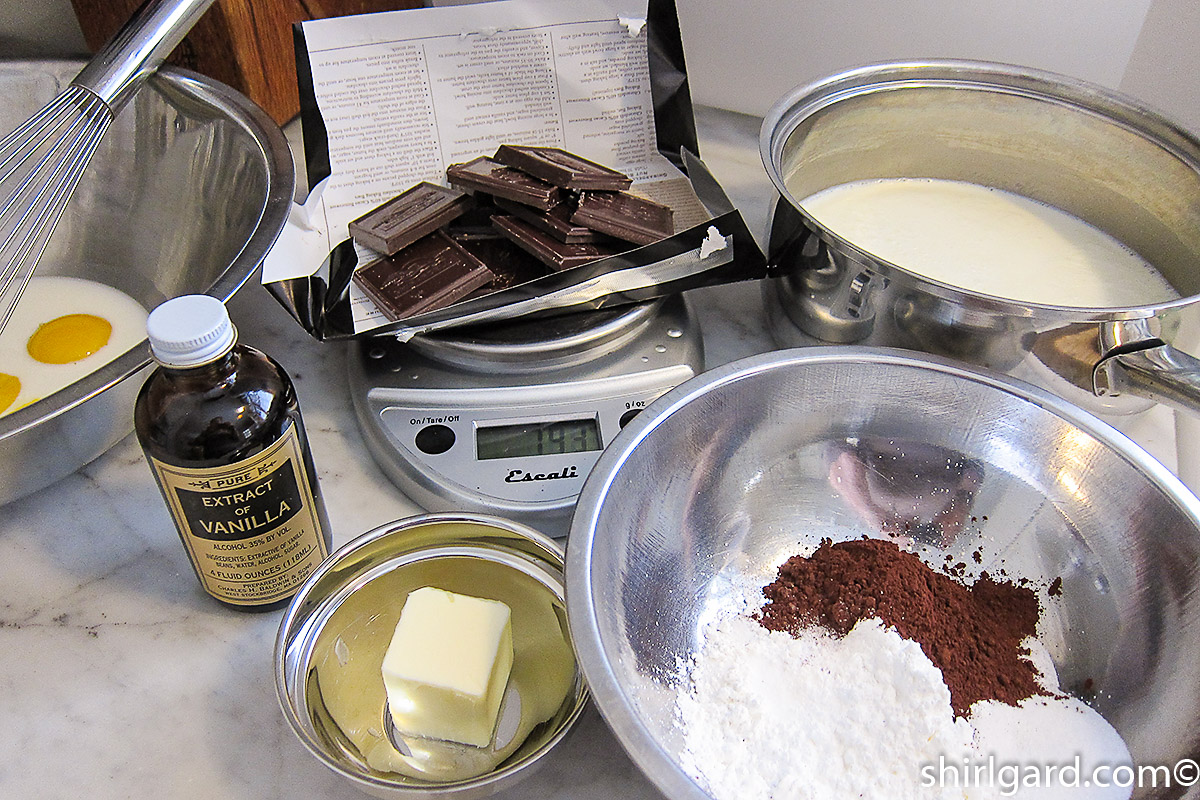 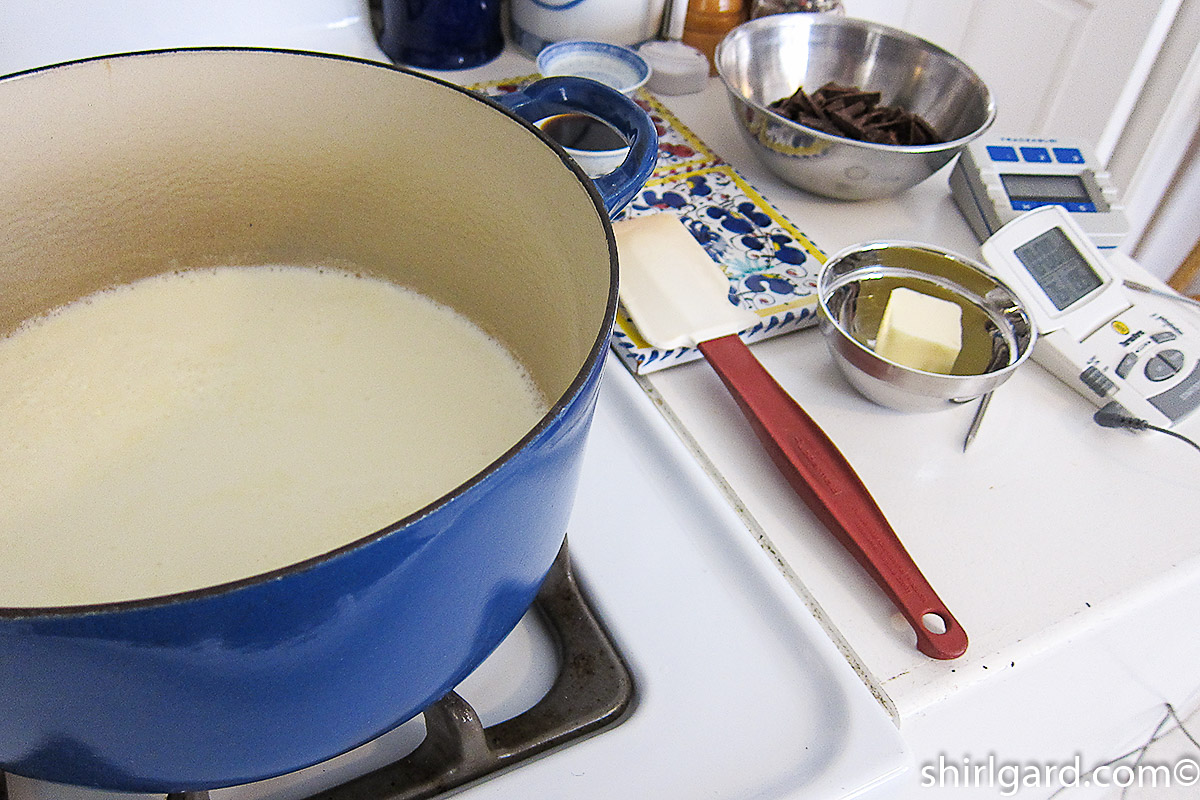 Getting ready to cook the pudding. 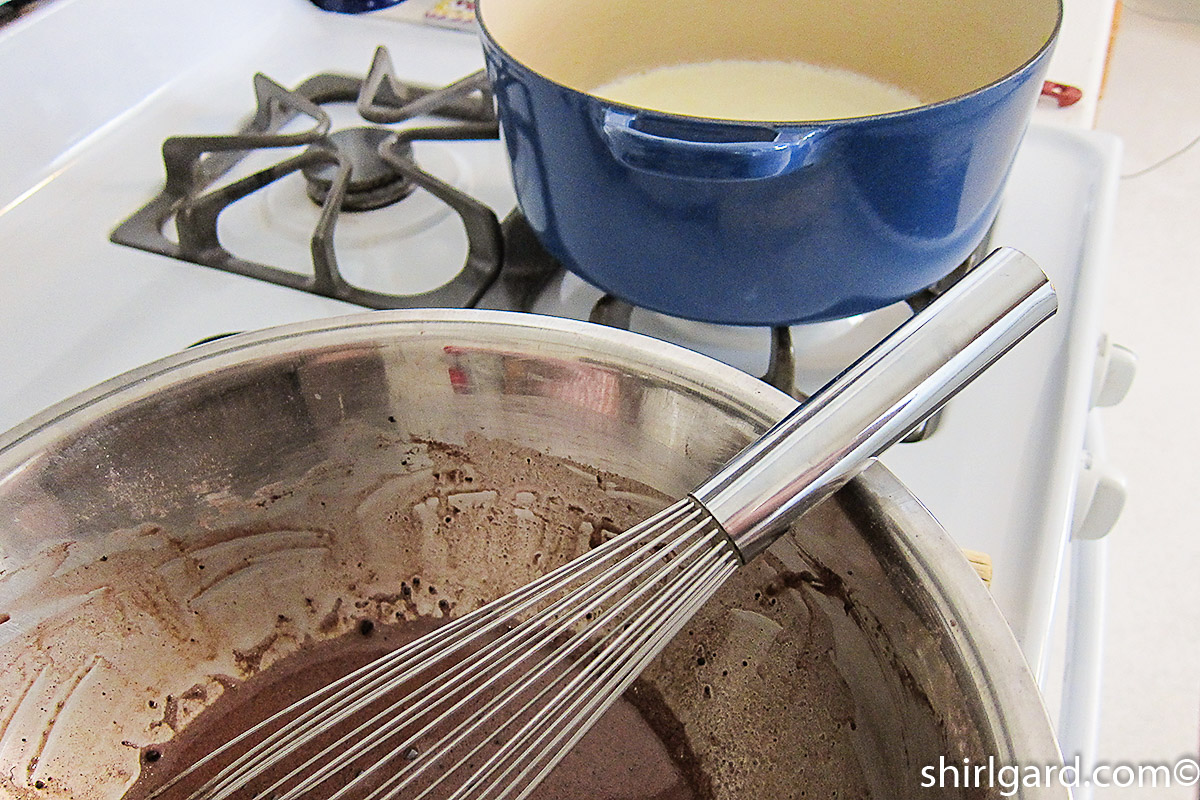 The cocoa powder/egg mixture ready to whisk into the hot milk and cream. 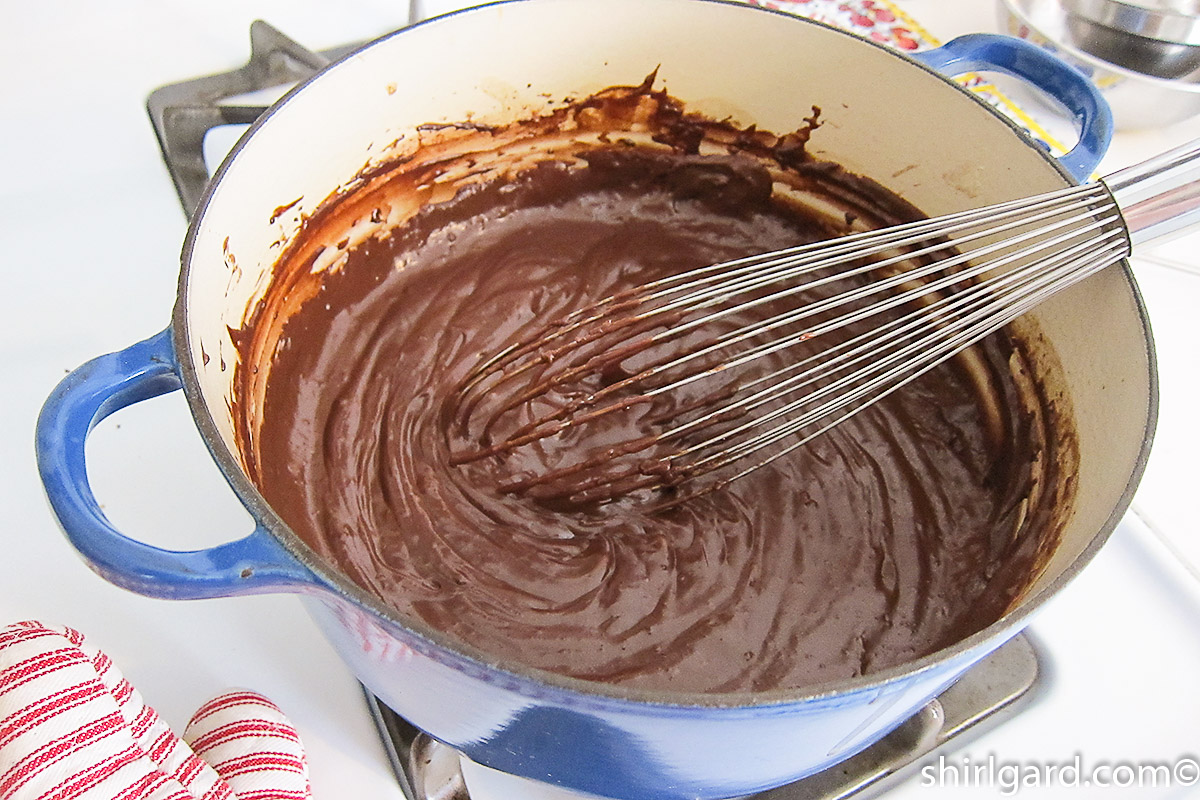 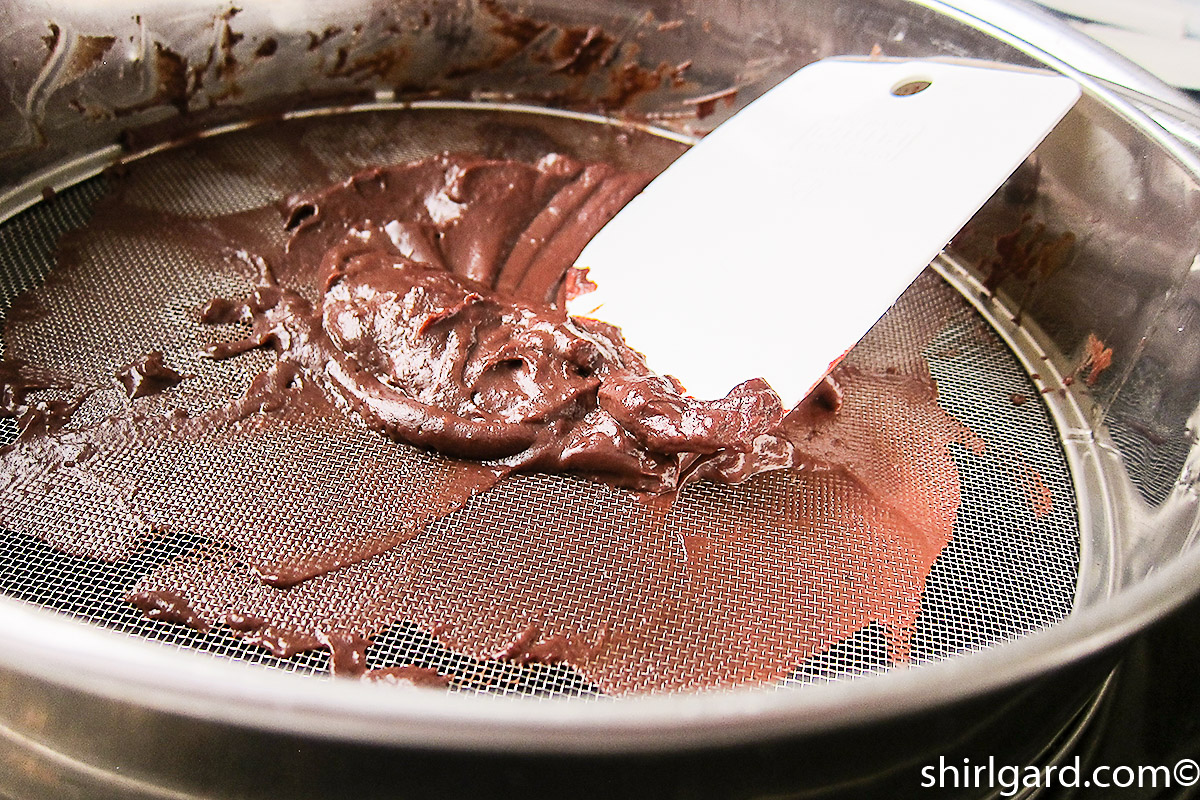 Passing the pudding through a tamis (or fine mesh seive). 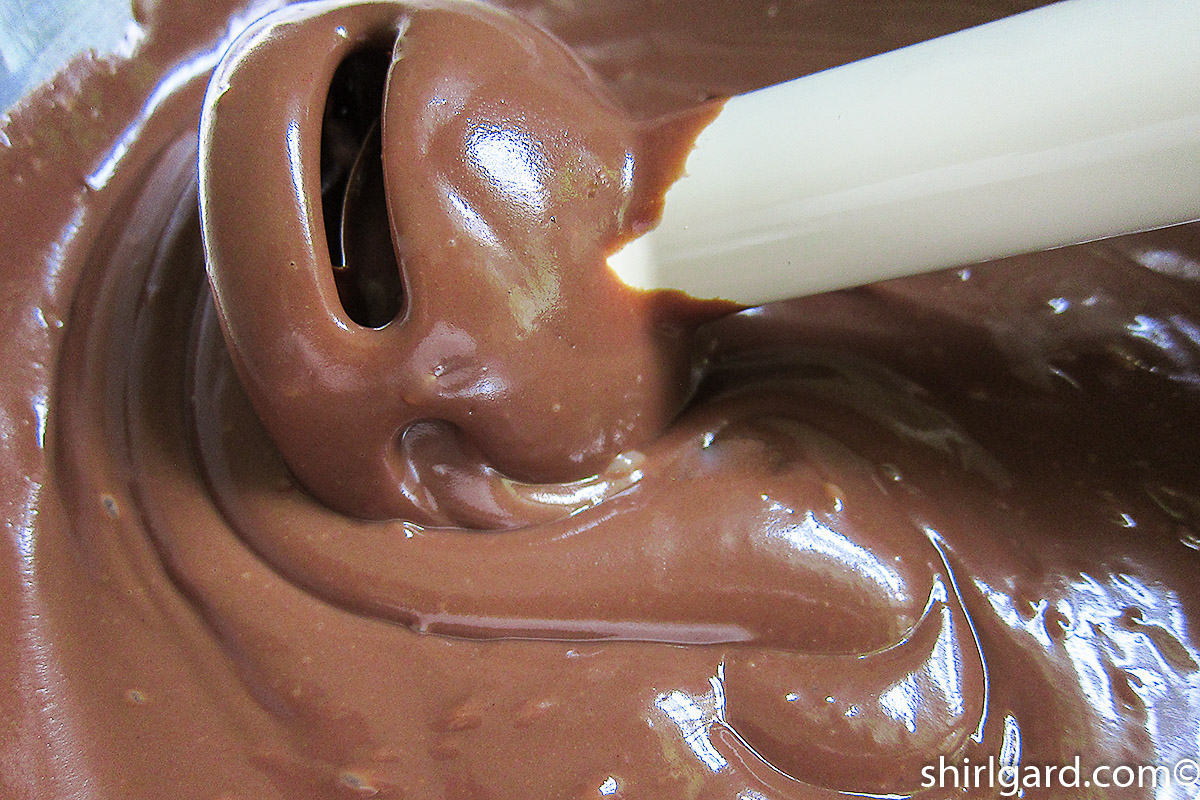 The secret to a silky-smooth pudding: emulsify with a hand-blender. 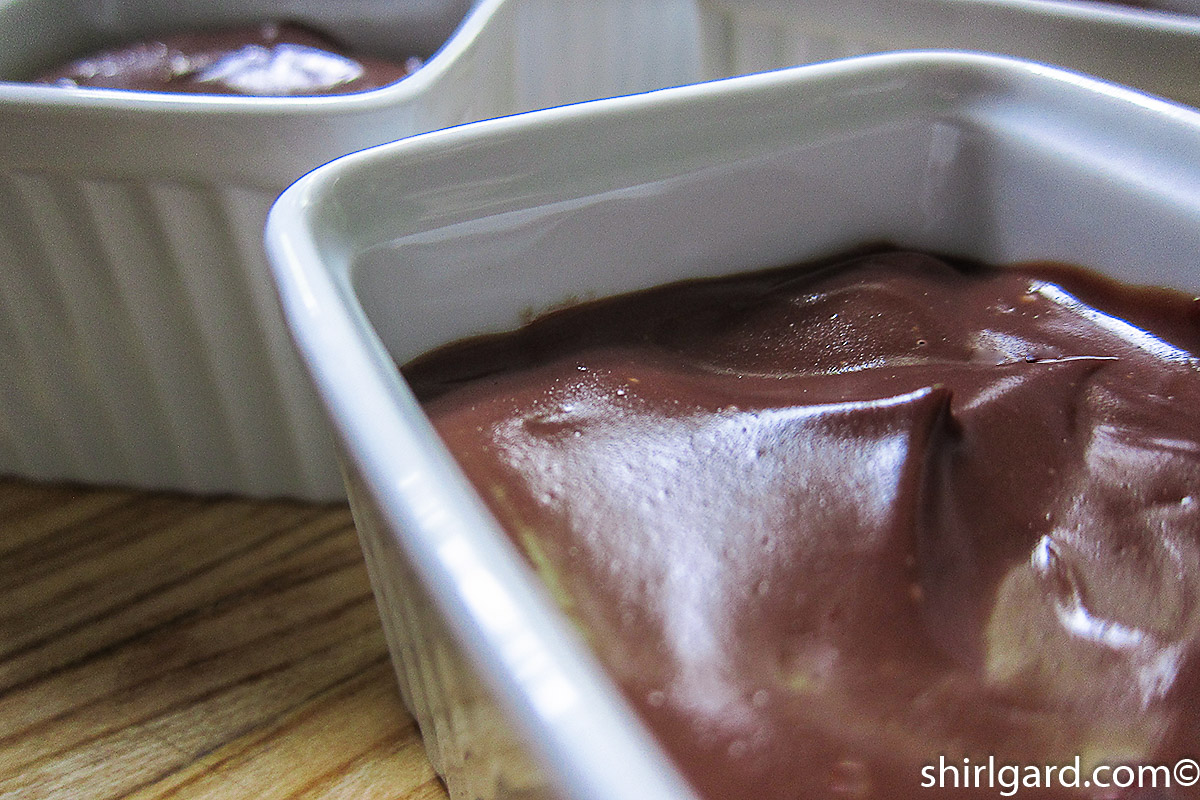 Warm pudding can be poured into ramekins. Use a 4-cup glass measuring cup with a spout. 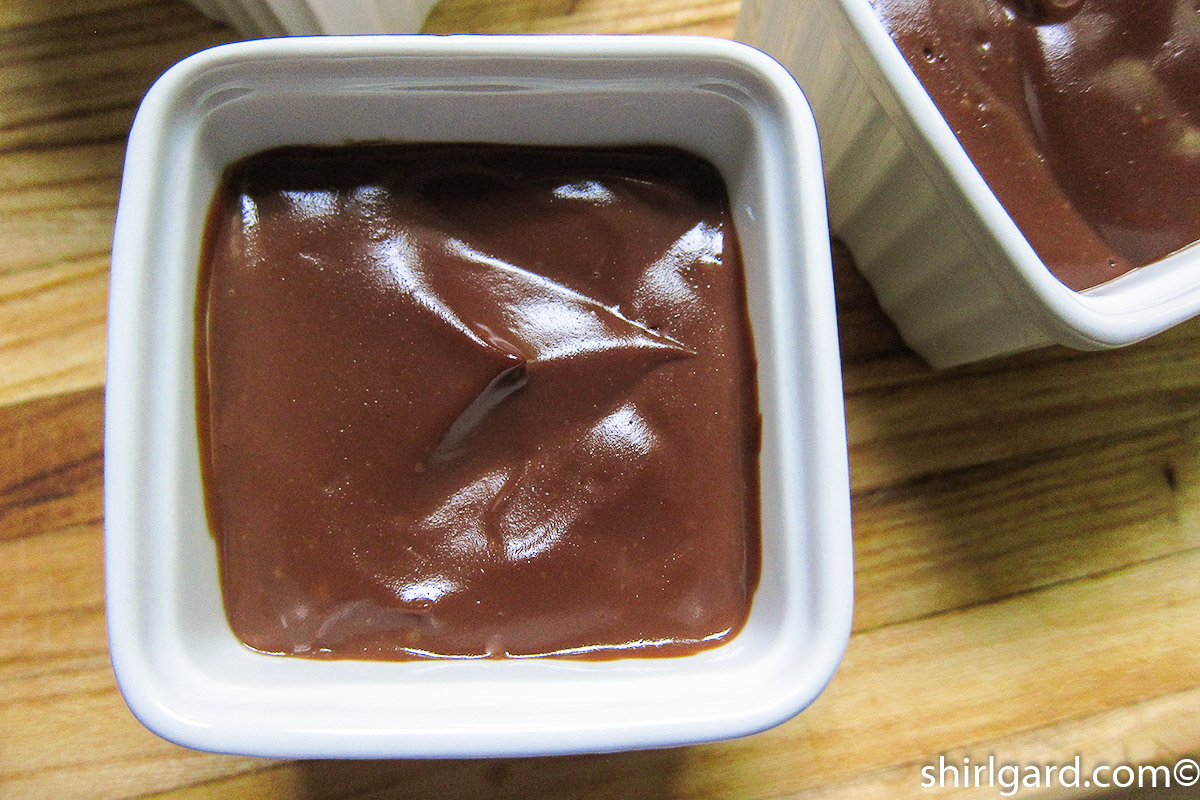 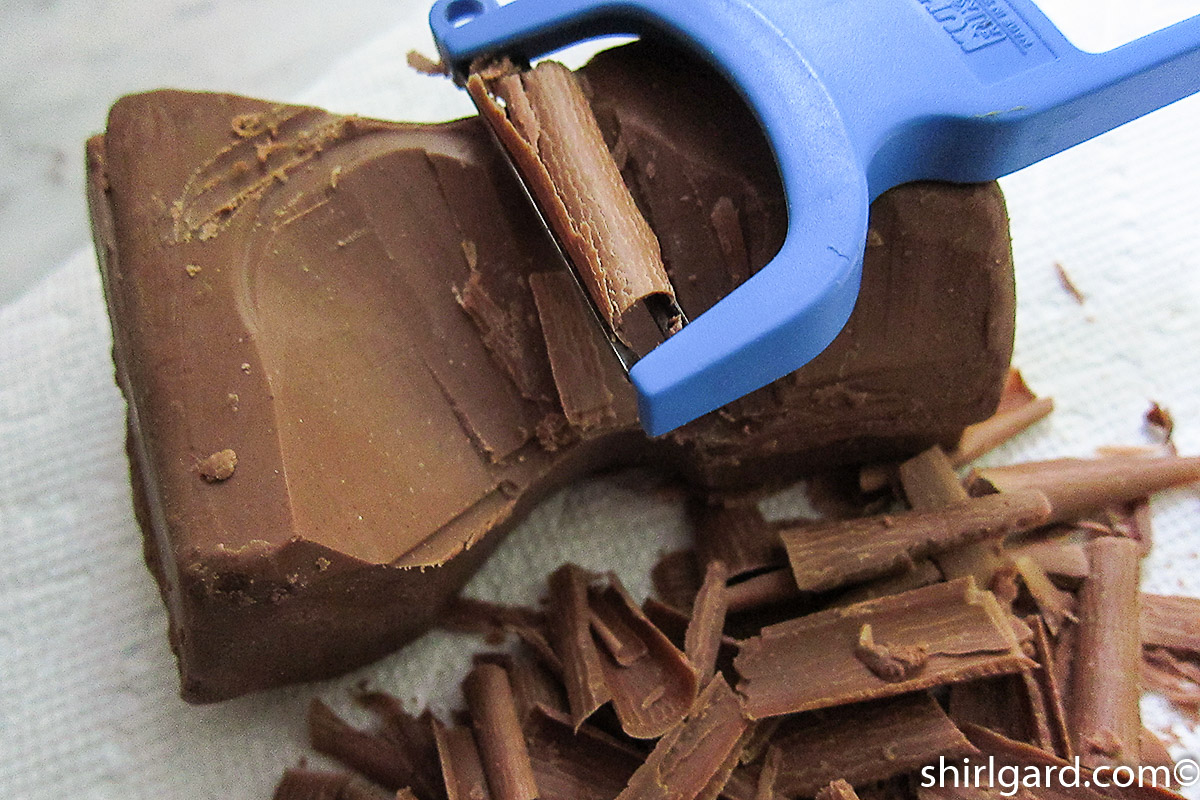 Use a block of Milk Chocolate (Callebaut) to make curls for garnish. Milk chocolate is a little softer & easier to curl than dark chocolate. 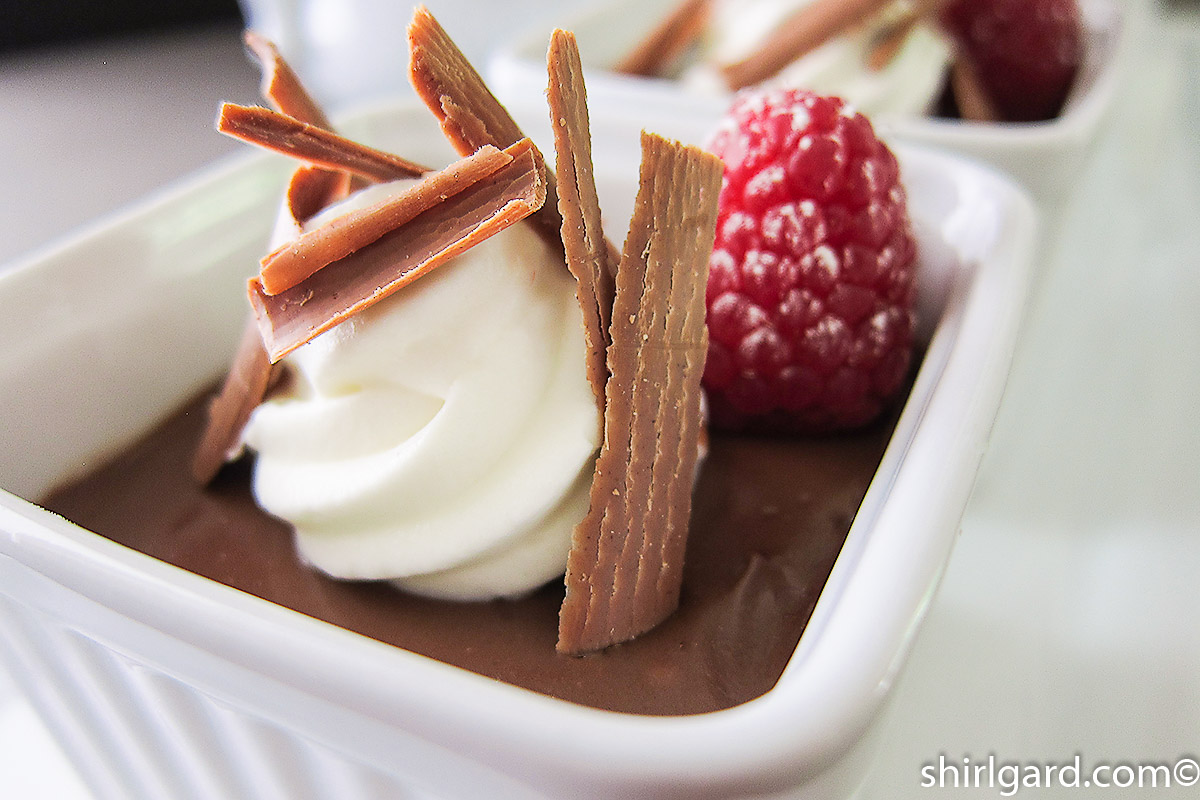 This recipe is a winner and I can pretty much guarantee that it will be a success every time your make it if you follow the tip above. It is a recipe that is great served in individual ramekins for lunch−or dinner−or anytime as a snack, with a dollop of whipped cream and chocolate shavings; a fresh raspberry doesn’t hurt. This pudding is also good for cake fillings, as in Shirl’s Brooklyn Blackout Cake.

I found a New York Times restaurant review by William Grimes from August 18, 1999 about “The American Place”. In it, regarding the desserts, he makes this very colorful comment: “The wisest course is to order the double chocolate pudding. Served with Schrafft’s sugar cookies, it’s a standout, one of those regressive treats that are as satisfying as a trashy novel.” I agree that it’s very satisfying. Please try it; you will love it. 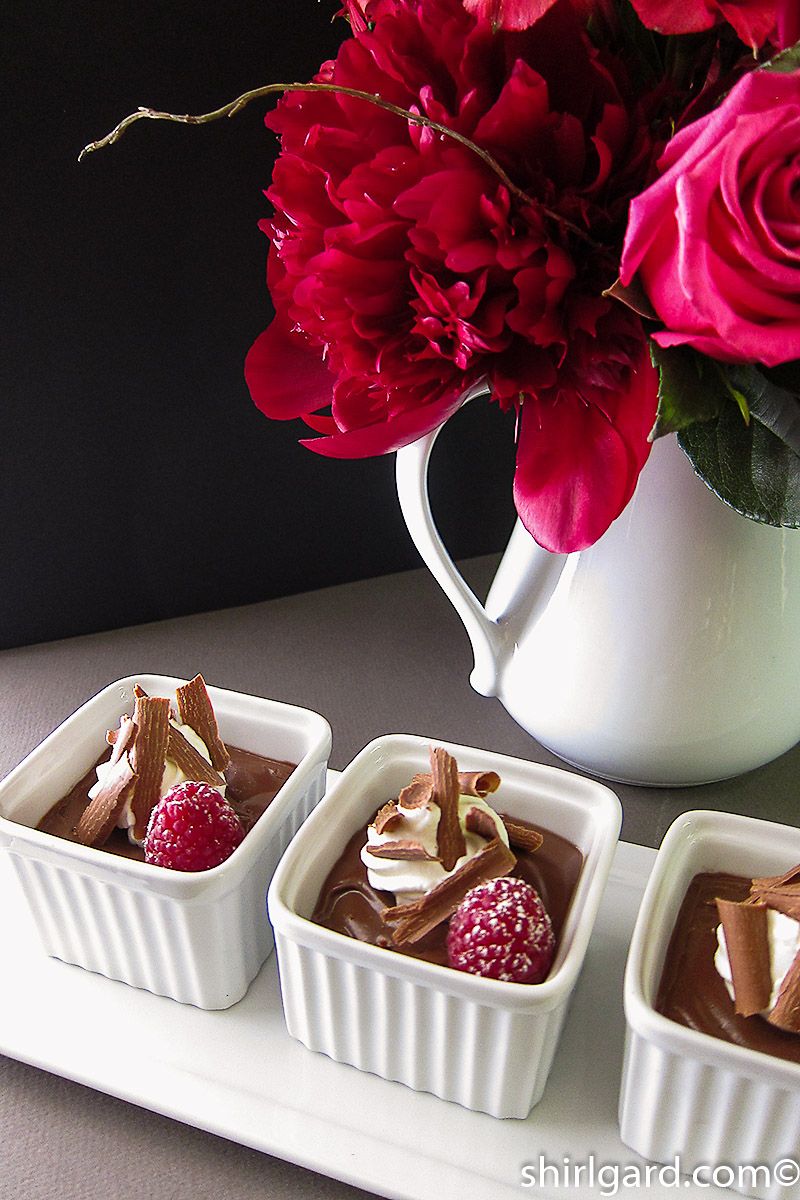 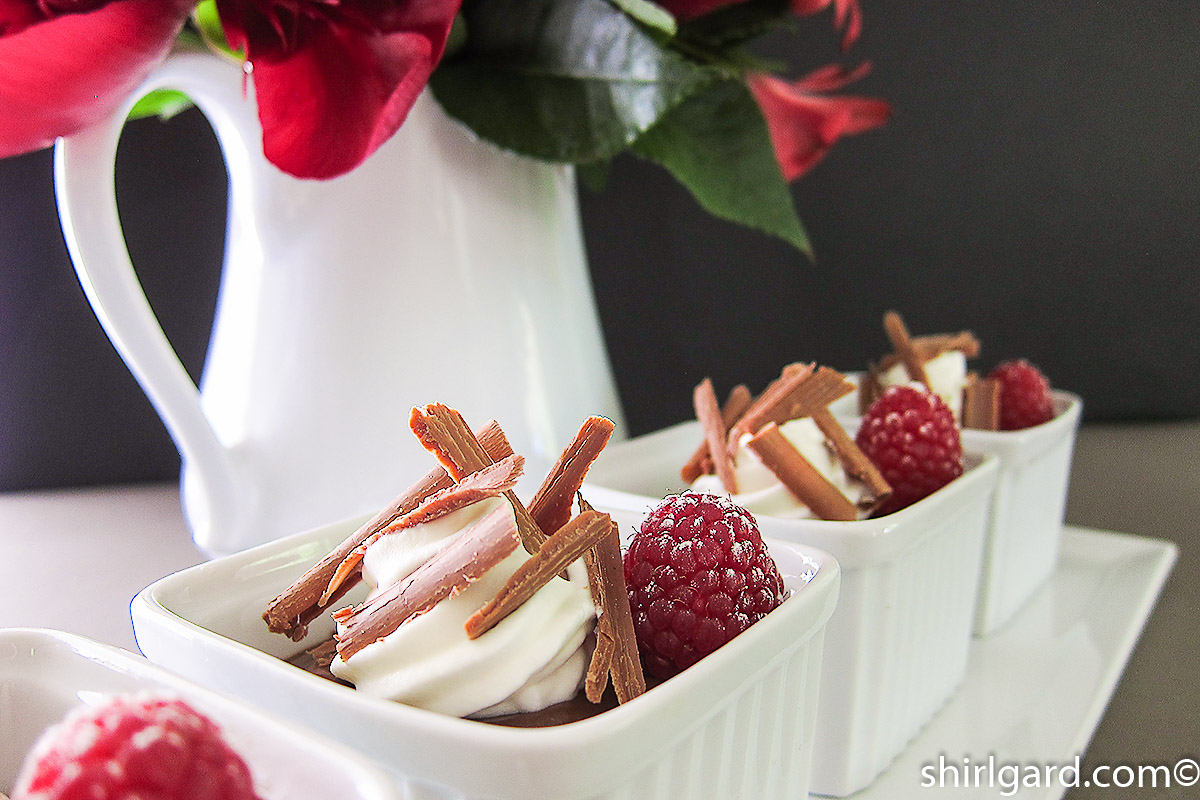 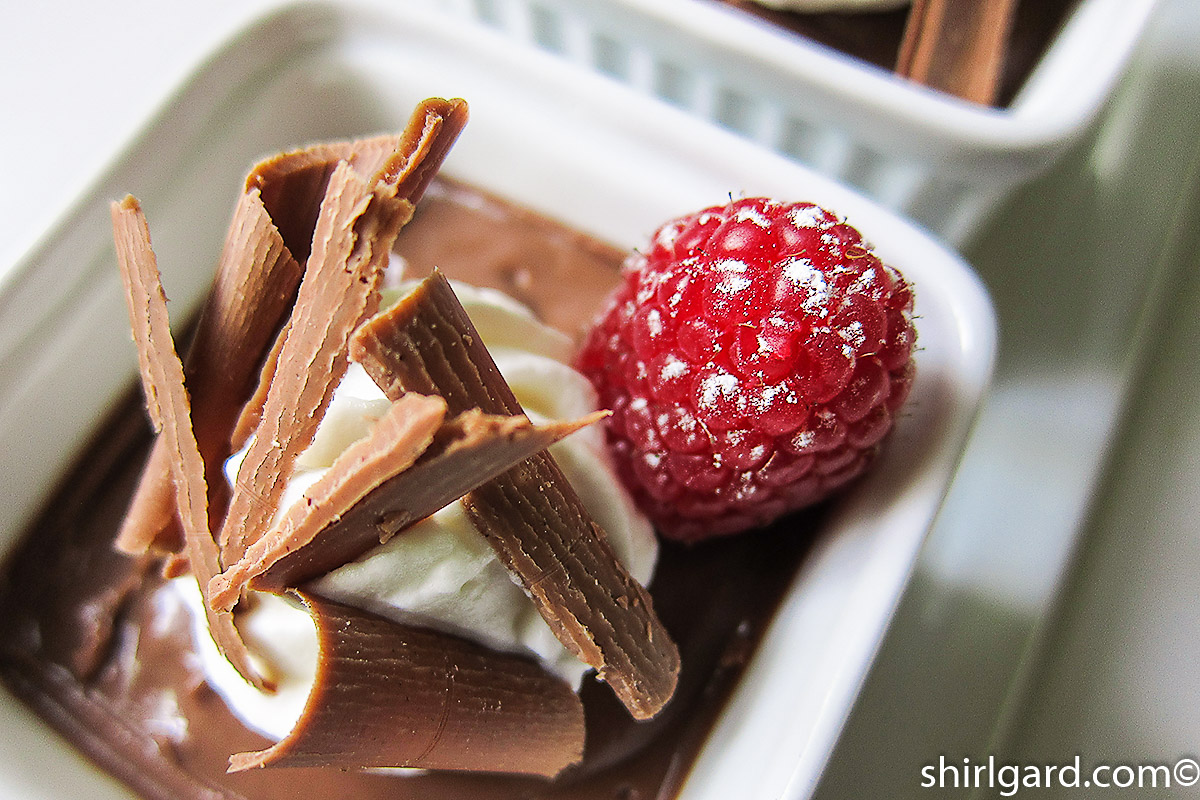 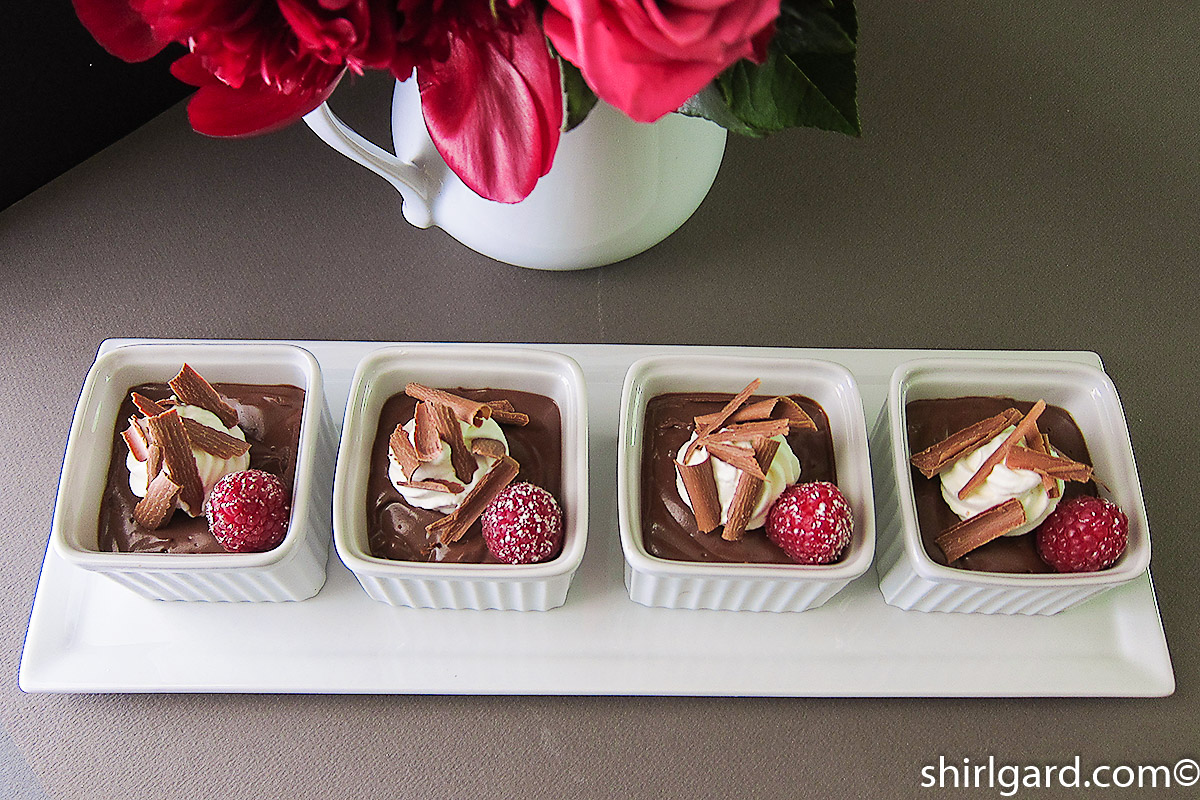 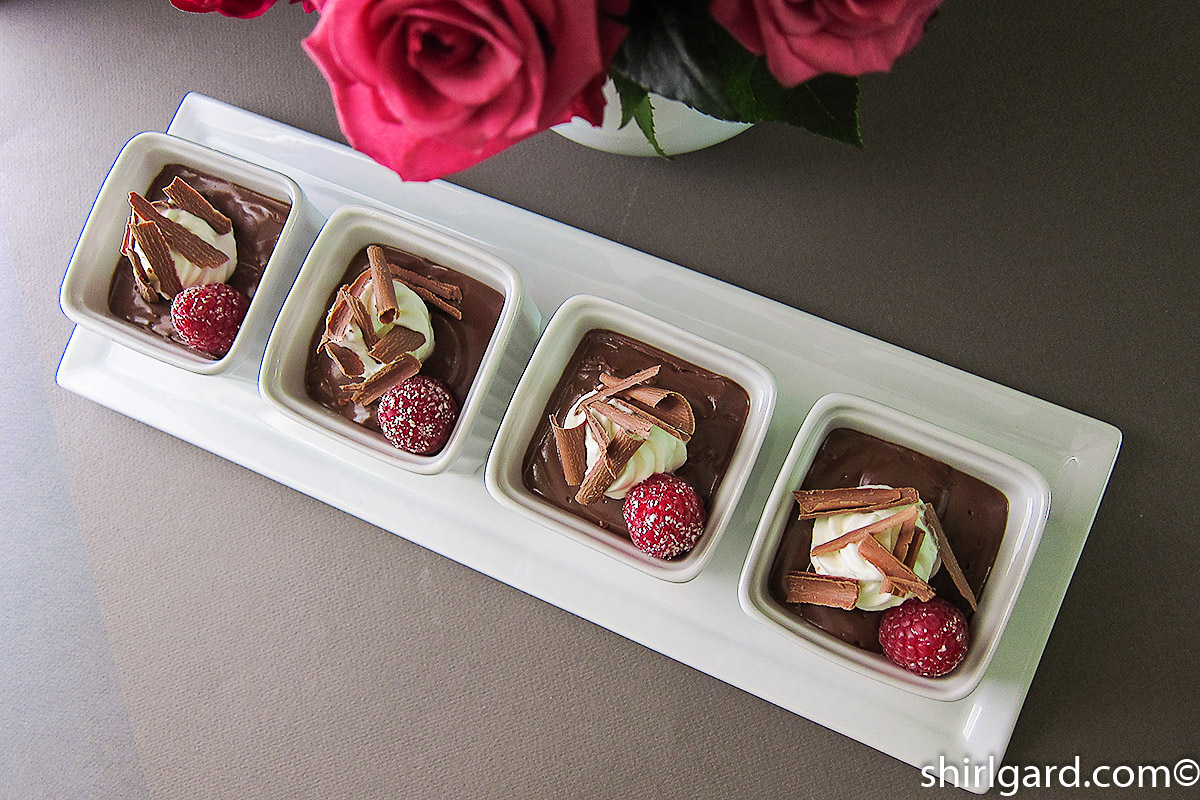 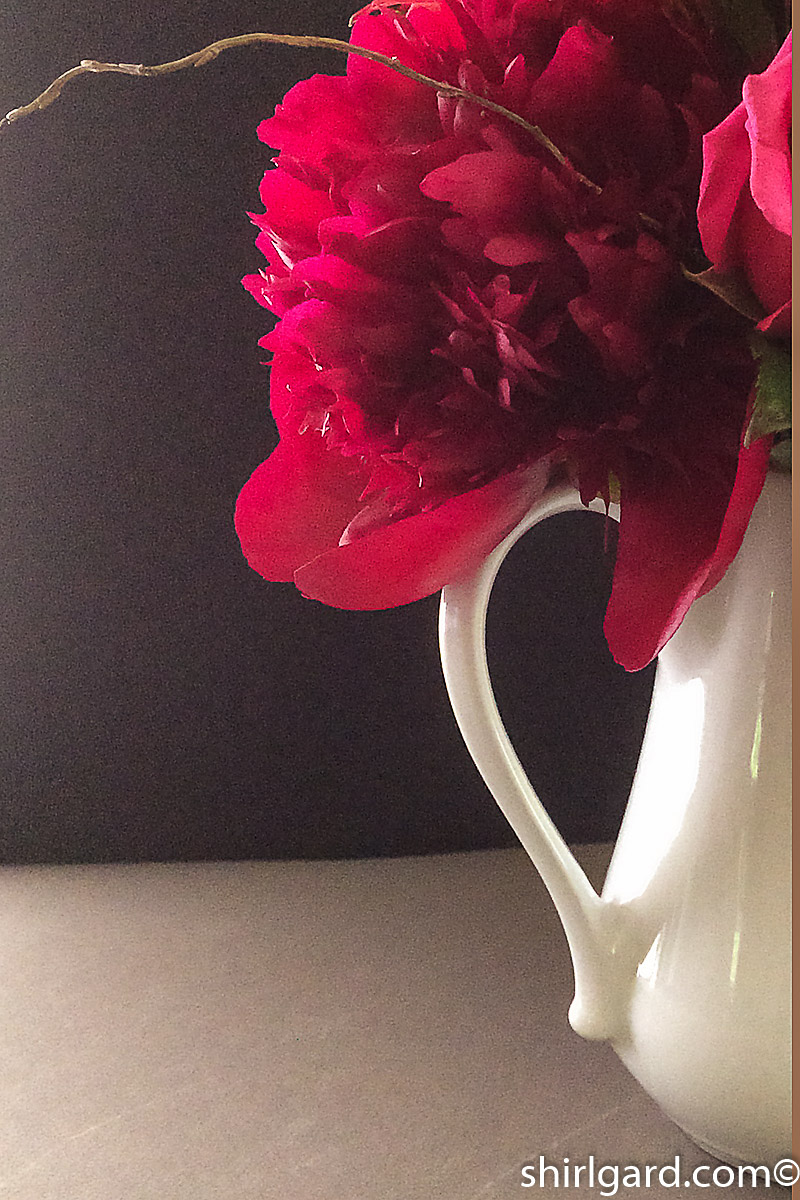 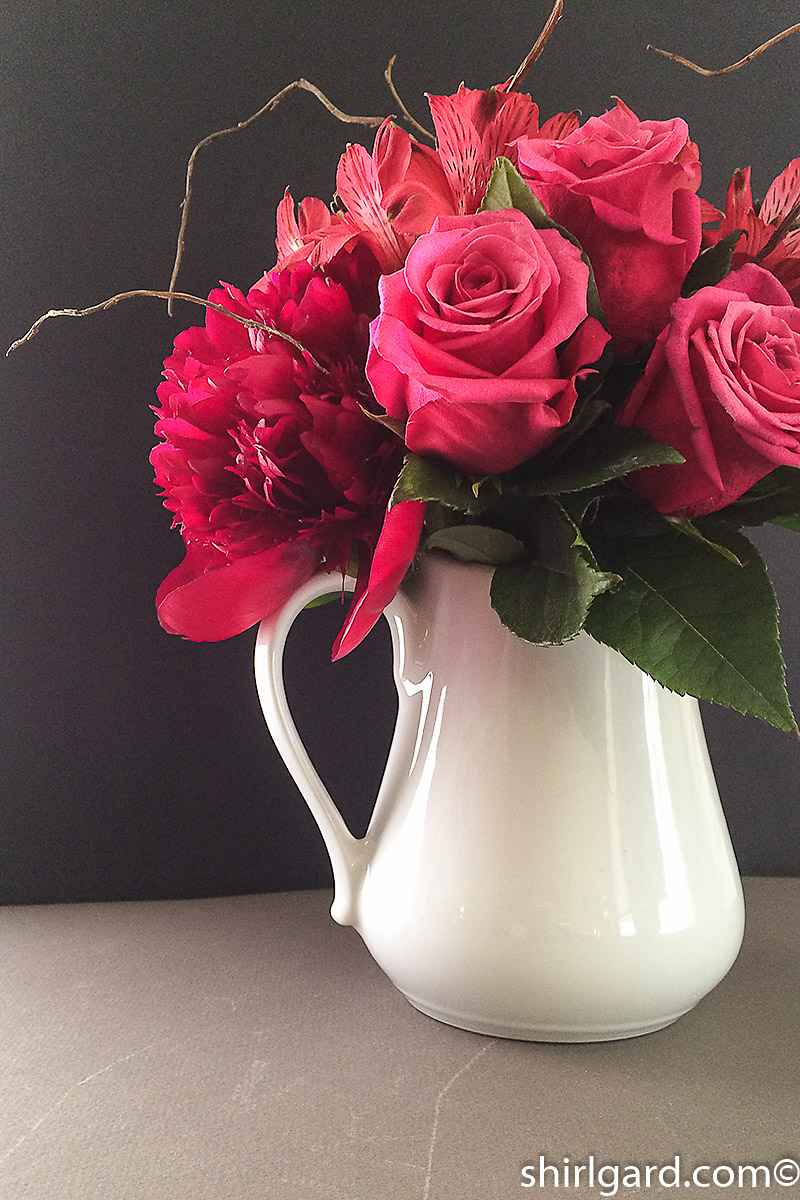 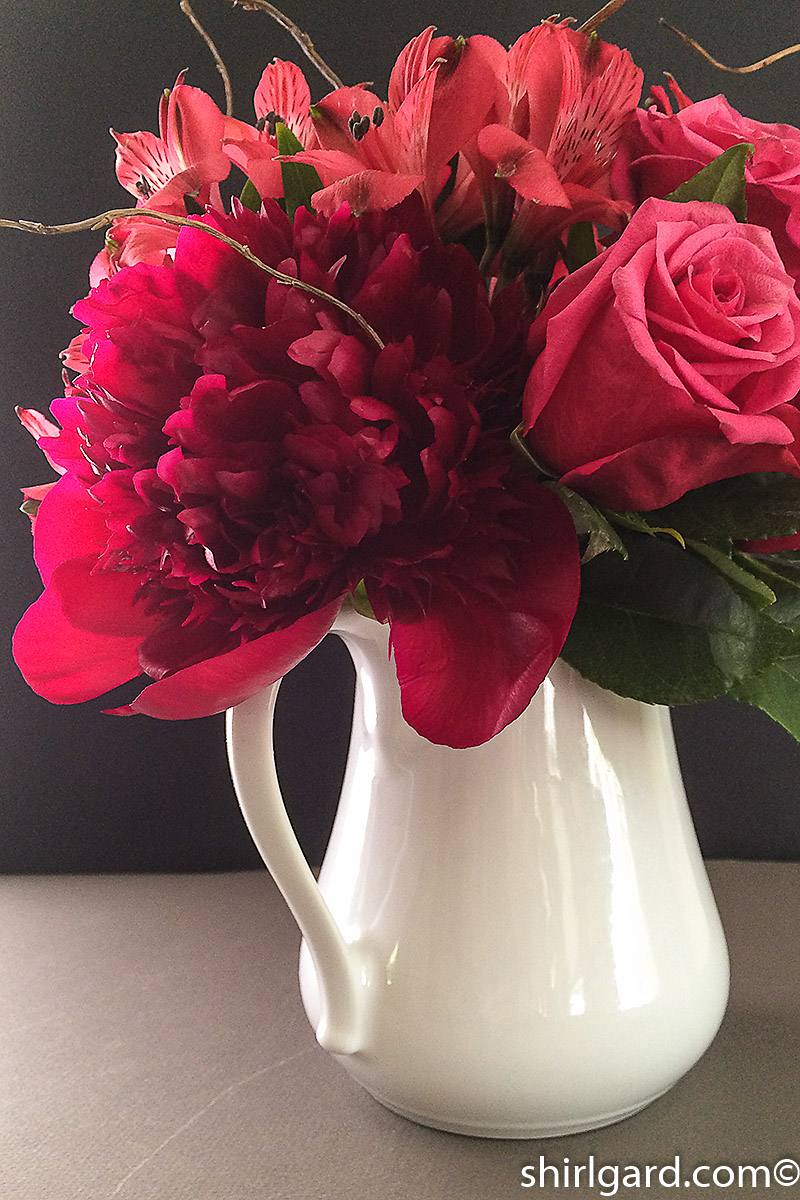 AUTHOR: Author: Shirl Gard
I had this pudding for dessert at a lunch about twenty years ago and never forgot it. The lunch was at Larry Forgione's "An American Place Restaurant" in New York City. His cookbook had just been published and I bought a copy that day at the restaurant. I felt extremely lucky when I opened the book and discovered that the recipe for Old-Fashioned Double Chocolate Pudding was included. This is a recipe that is great for individual servings in ramekins, (I like to use 4-ounce square ramekins) but is also good for cake fillings, as in Shirl's Brooklyn Blackout Cake. 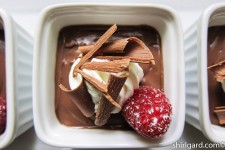