“When the frost is on the punkin”: Pumpkin Ginger Muffins

When I was growing up, as soon as the fall leaves started swirling and the first cold-front hit Oklahoma, my father would go around saying: “When the frost is on the punkin and the fodder’s in the shock!”. As a former English teacher, turned school superintendent, he was able to quote quite a bit of James Whitcomb Riley’s poem. As he worked at doing all the things you do when winter is coming, like bringing in the lawn furniture and closing up the garden shed, he would go on and on and on with this poem, so there was no chance that his kids would ever forget it, and I still haven’t.

Now, as the leaves have started to swirl here in the Berkshires, and the trees are in the process of turning those beautiful shades of orange, red, burgundy, and yellow, and all kinds of shades in between, it’s time once again to think about pumpkins. The town of Lenox is heaped   with pumpkins. The “Apple Squeeze” street fair was last weekend and every store in town got ready for it by setting up a display of pumpkins in front of their store. These tableaus of autumn consist of hay bales piled with pumpkins in all hues of pumpkin-orange and white, ornamental cabbages in jade green and purple, ornamental squash in shades of green, and ubiquitous mums in every imaginable color, watching over everything.

“But the air’s so appetizin’; and the landscape through the haze

Of a crisp and sunny morning of the airly autumn days

Is a pictur’ that no painter has the colorin’ to mock-

When the frost is on the punkin and the fodder’s in the shock.” 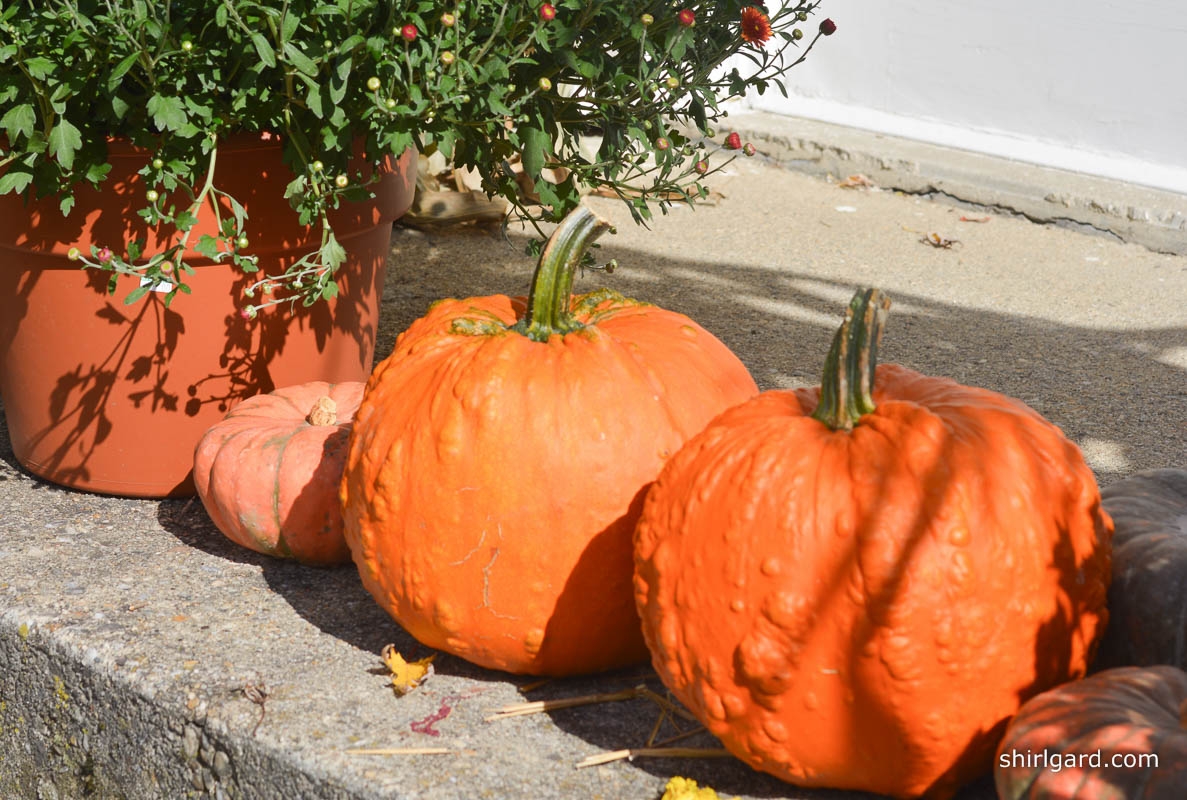 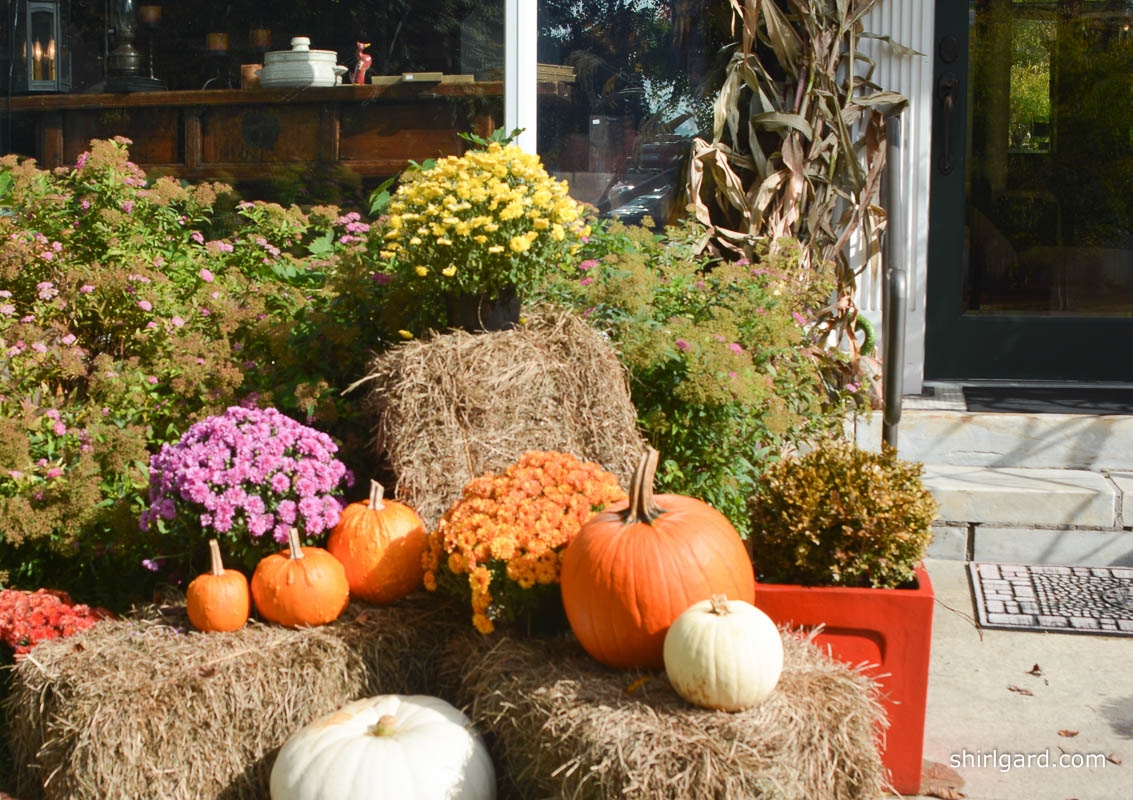 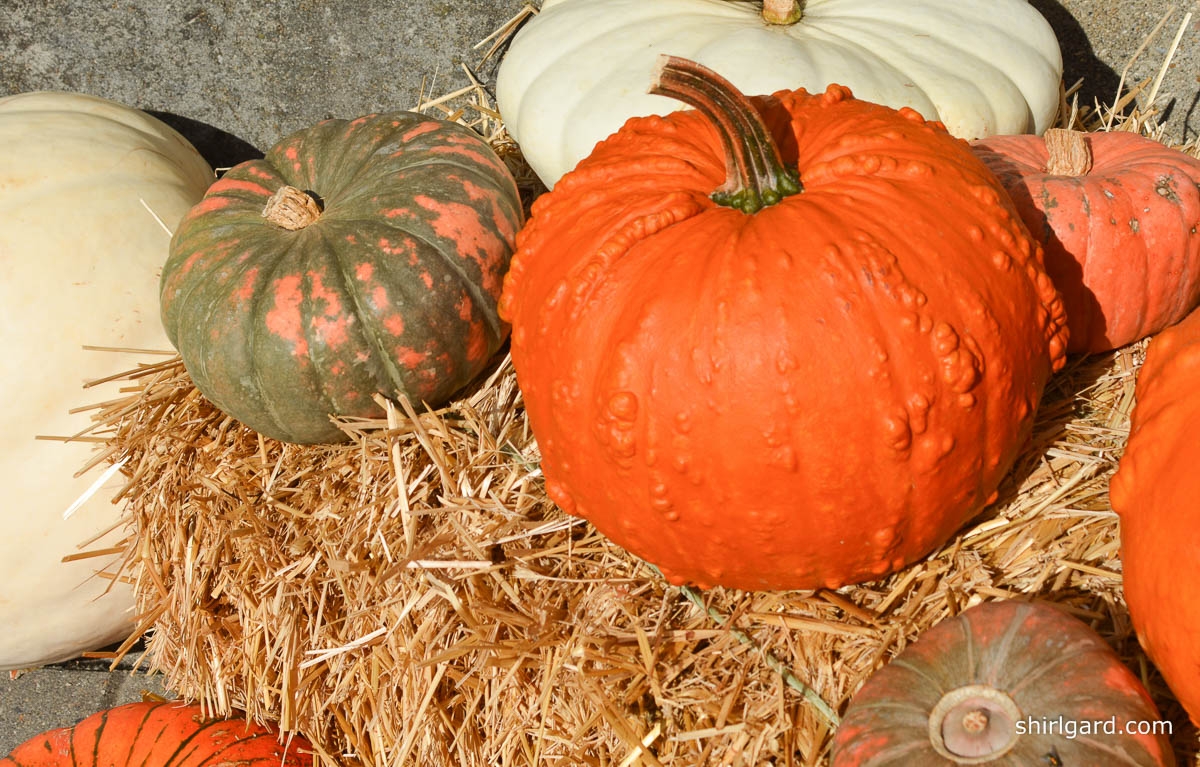 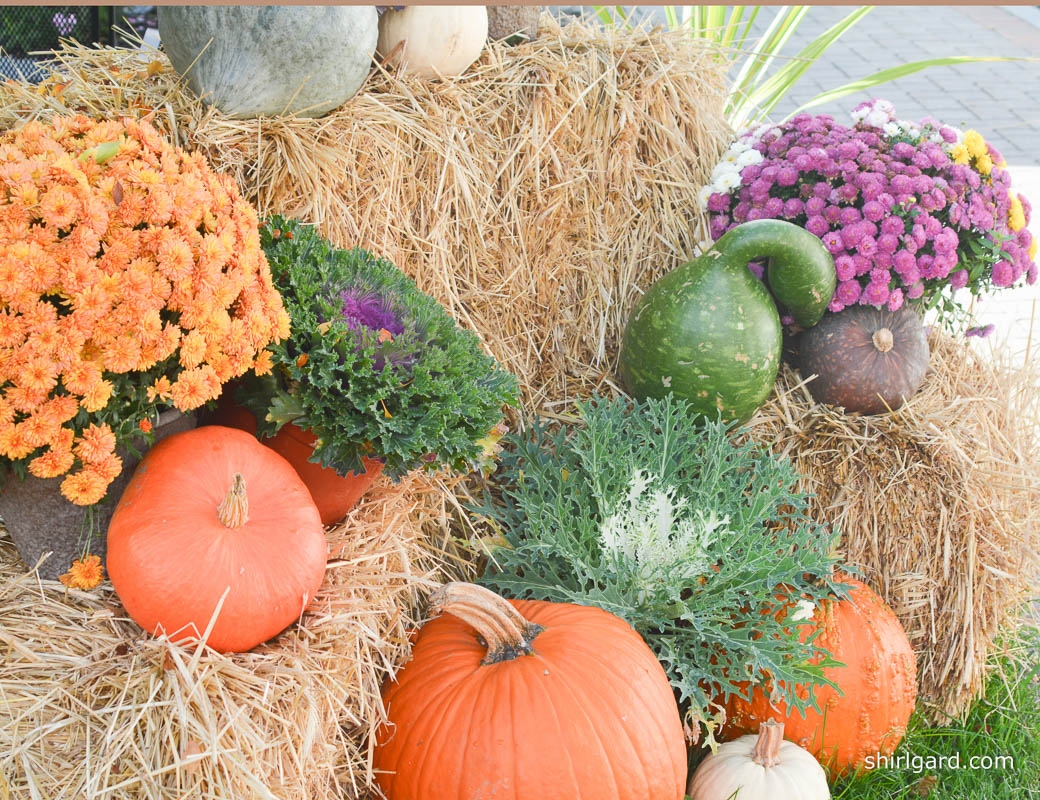 In my mind, any “ode” to pumpkins has to include some pumpkin muffins. When the leaves start turning, that’s one of the first things I start craving. I got my first taste of a really good pumpkin muffin when I lived in Boston for a while, a few years back. There was a little coffee shop located several blocks from my apartment in Back Bay; I think it was on the corner of Newberry Street, but don’t remember the cross street. Anyway, they had the best pumpkin muffins. They were a deep autumn color almost as dark as gingerbread but with a pumpkin-orange hue, moist and dense, with lots of spices and chunks of candied ginger. Yum. I bought one almost every time I went near that corner. Here’s my best shot at those muffins.

I have tried many times to make my own pumpkin purée and have never been able to quite match the flavor and consistency of Libby’s 100% Pure Pumpkin, which is what is called for in this recipe.  Note that this product is different from Libby’s Pumpkin Pie Filling in that the 100% version has no added sugar or spices. The reason that it is so hard to make a good purée has to do with the pumpkins themselves, not the ability of the cook. For one thing, it is very hard to find “pie” pumpkins of a quality that both tastes great and produces a good texture. Libby’s uses a special variety called Dickinson as explained on these sites: (Those jack-o-lantern pumpkins just won’t do it.) SG 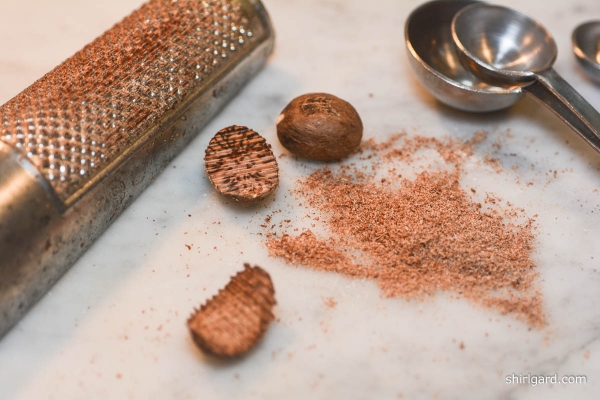 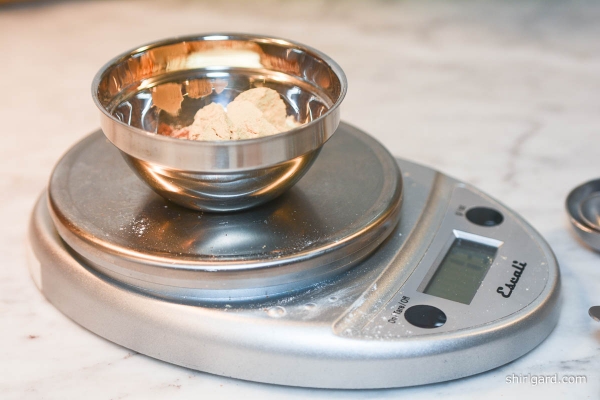 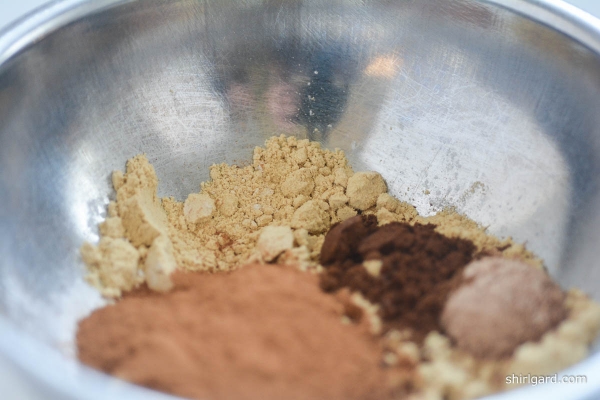 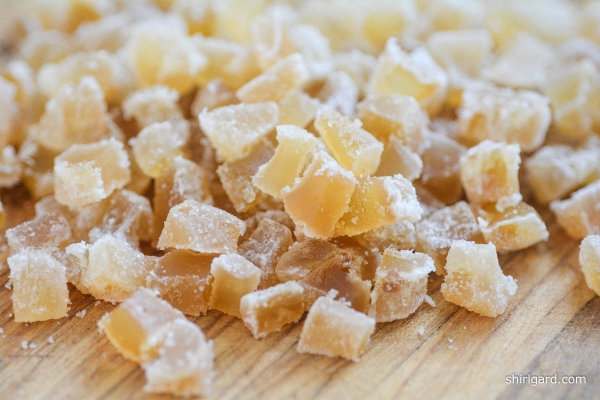 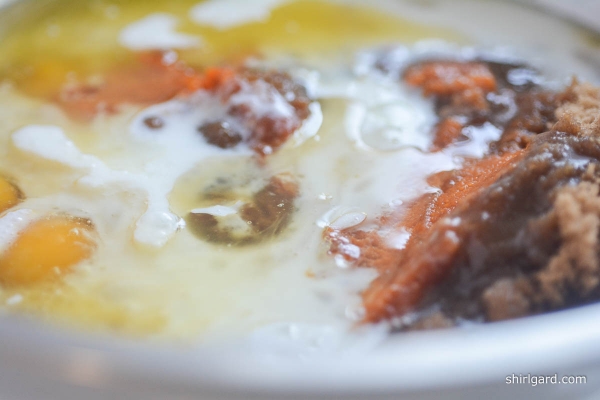 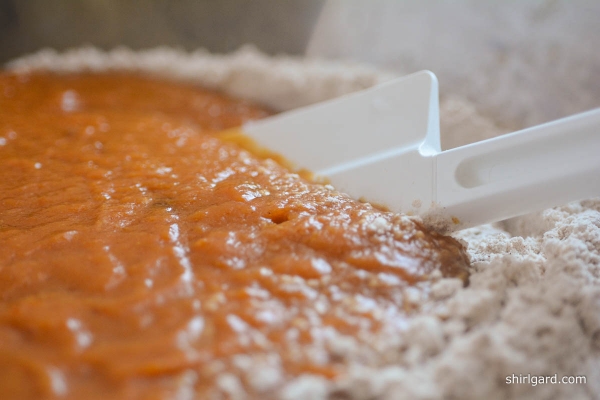 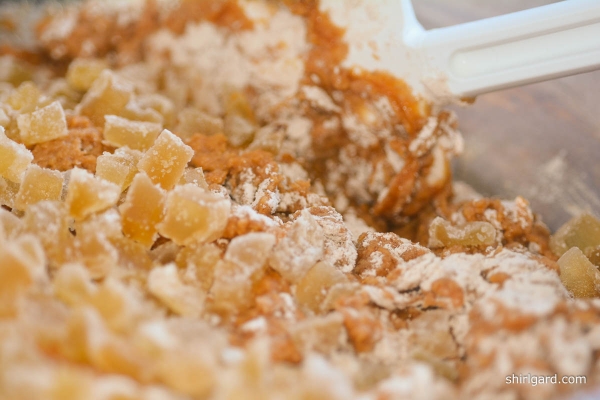 When Liquids Mixed in Half Way, add Ginger and Finish Folding in. 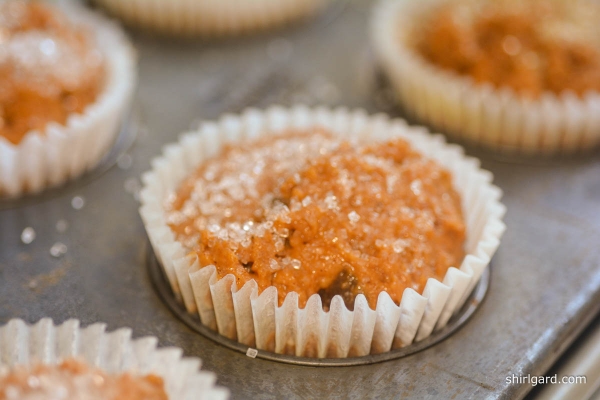 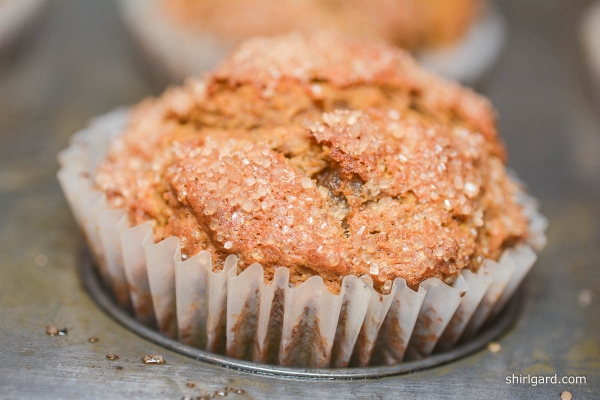 Out of the Oven

AUTHOR: Shirl Gard
These are muffins with a deep autumn color almost as dark as gingerbread, but with a pumpkin-orange hue. They are moist and dense with lots of spices and chunks of candied ginger. Yum!

YIELD: 14 LARGE MUFFINS - 135g (4.75 oz) EACH
INGREDIENTS
INSTRUCTIONS
Recipe Ancestry Notes:
This recipe was adapted from a recipe in Nantucket Open-House Cookbook by Sarah Leah Chase (1987). I made a few changes to the original recipe, primarily to make the muffins more moist: by using half butter / half canola oil instead of all margarine and by using buttermilk instead of apple cider. Following my "less is more" motto when it comes to leavening, I cut back on the baking soda. Also, since older recipes tend to have too much sugar, I used less sugar.
3.4.3177 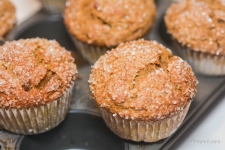