Everything that I have read about traditional Irish Soda Bread and its beginnings points to a very spare and frugal recipe consisting of only four ingredients: flour, baking soda, salt, and buttermilk. This bread, because of its frugality, was popularized by necessity in the mid-19th century during the great famine in Ireland, when the potato crop failed. There has always been a debate about whether Irish Soda Bread that includes other ingredients such as butter, sugar, raisins, caraway seeds etc. can be considered “traditional”. Apparently not, according to The Society for the Preservation of Irish Soda Bread, where they say on their home page: “Flour, Salt, Baking Soda, Buttermilk. Anything else added makes it a ‘Tea Cake’”.

According to this definition, many American and Irish versions of Irish Soda Bread, fall into the Society’s “Tea Cake” category, but that’s OK; they are nevertheless delicious for breakfast, brunch, or snacking. Whether “traditional” or of the “tea cake” variety, we tend to put all Irish Soda Breads in the “Quick Breads” category because they are made with baking soda, not yeast, and soft wheat flour instead of hard. What’s “traditional” and what’s not can be a little confusing. 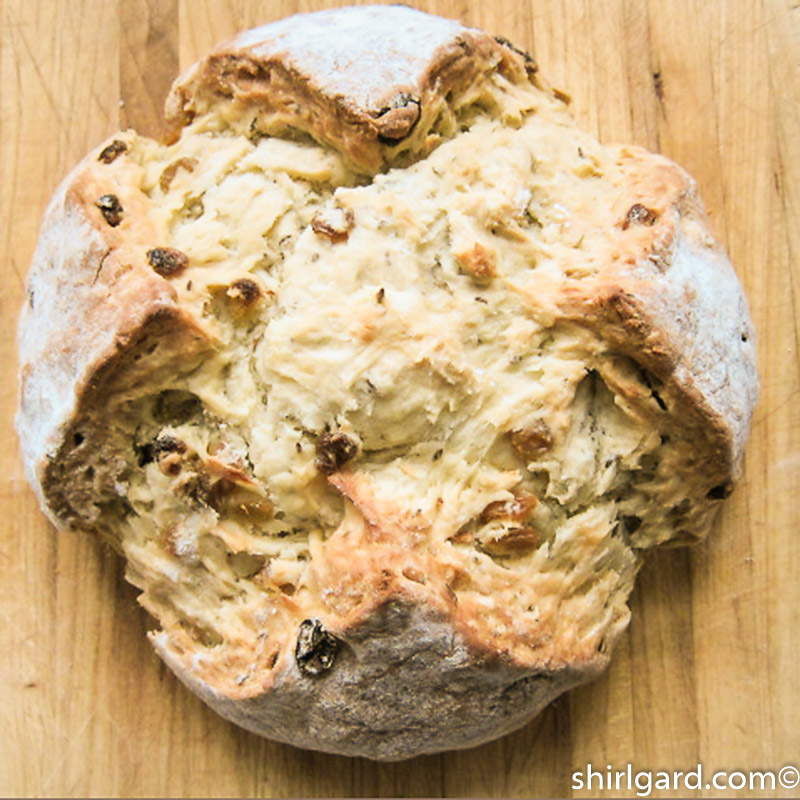 To get a little more insight, I started reading my old copy of Darina Allen’s Ballymaloe Cooking School Cookbook (2002), (Ballymaloe, Ireland) which is where I always go when I want information on Irish cooking and baking. This book contains both “traditional” and very amusingly descriptive variations (from “Spotted Dog” to “Seedy Bread” to “Spotted Puppies”). Reading these names made me smile and inspired me to write this story, bake some Irish Soda breads, and create a Glossary of Irish Soda Bread jargon. 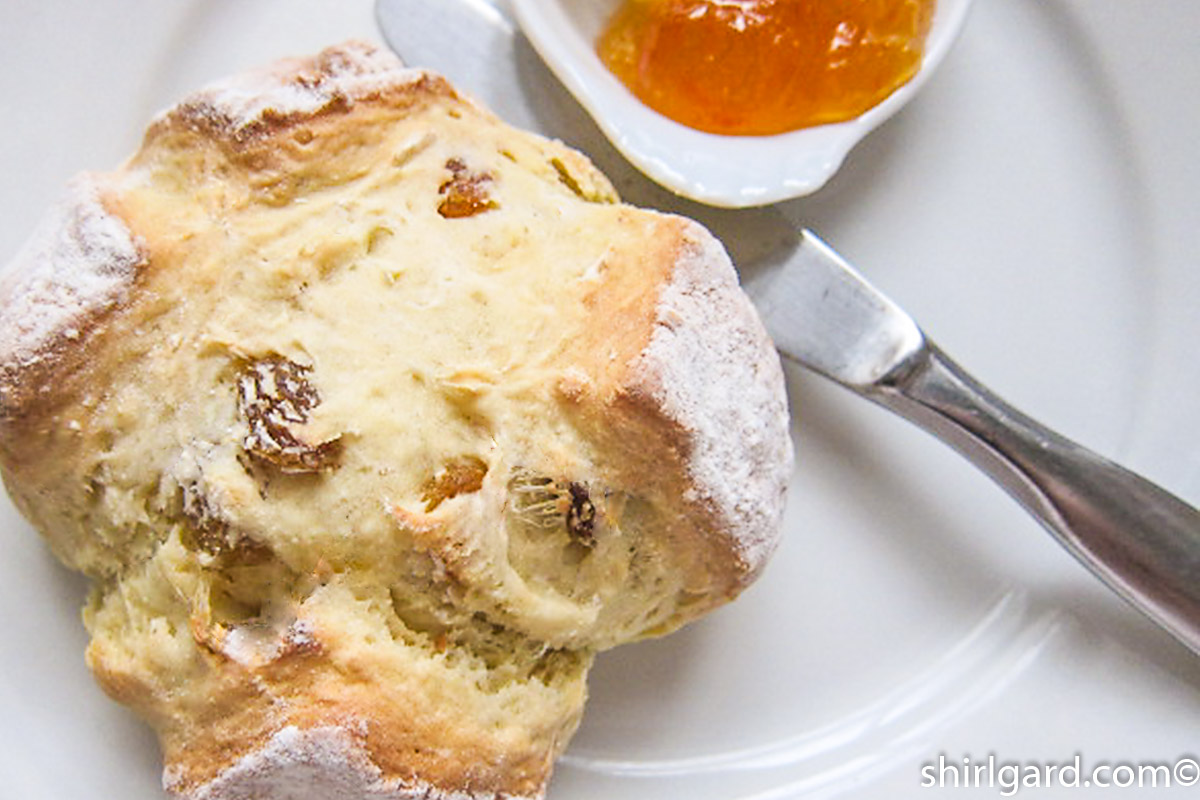 One final tip that I picked up from Darina Allen’s book: “Place the dough on a baking tray dusted lightly with flour. With a sharp knife, cut a deep  cross on it, letting the cuts go over the sides of the bread. Prick with a knife at the 4 angles as, according to Irish folklore, this is to let the fairies out!”. As to why it’s important to mark the bread with a cross and “let the fairies out”, edible-ireland.com explains: “Superstition says that bread marked with a cross wards off evil, but the Irish slant is that it protects it from the fairies, who were liable to jinx your baking”. All of this talk of “crosses” and “fairies” makes me smile too.  Let’s bake some Soda Bread, and please, let’s “ward off evil” and not tempt the fairies. 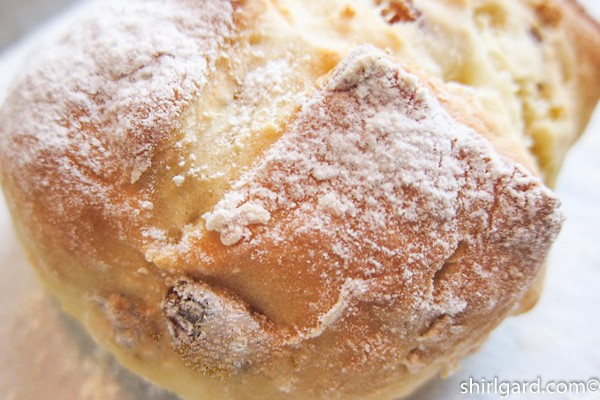 VARIATION #1: “SPOTTED PUPPIES”
Here’s how to make “Spotted Puppies”. The first time I made these I used golden raisins, but the “spots” didn’t show up enough, so I switched to dark raisins. I just couldn’t get 101 Dalmatians out of my mind. 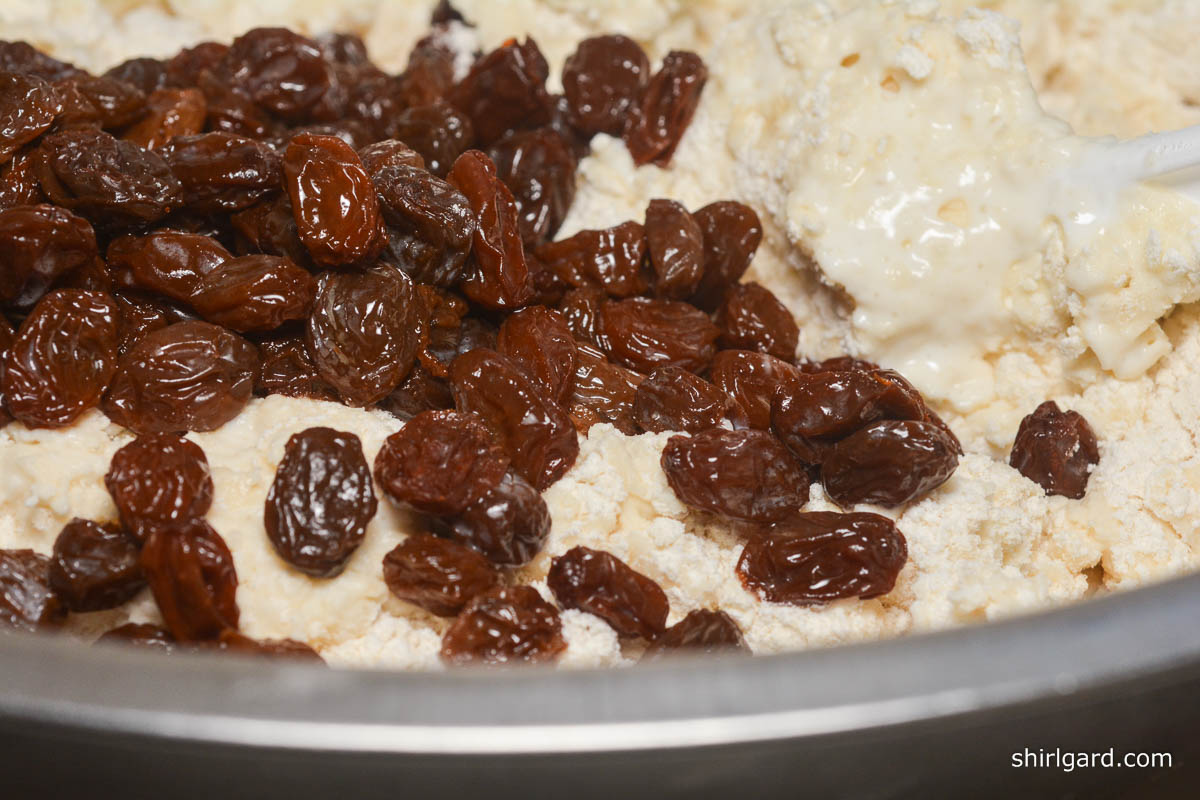 Use Dark Raisins for Better “Spots” 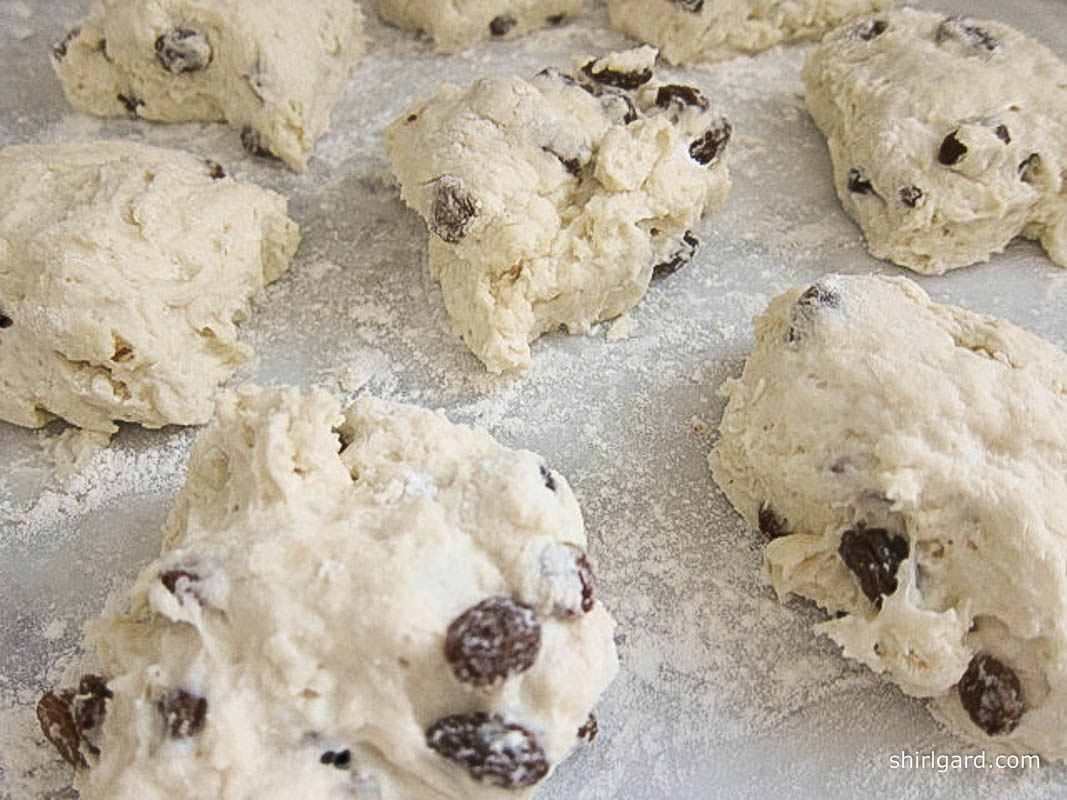 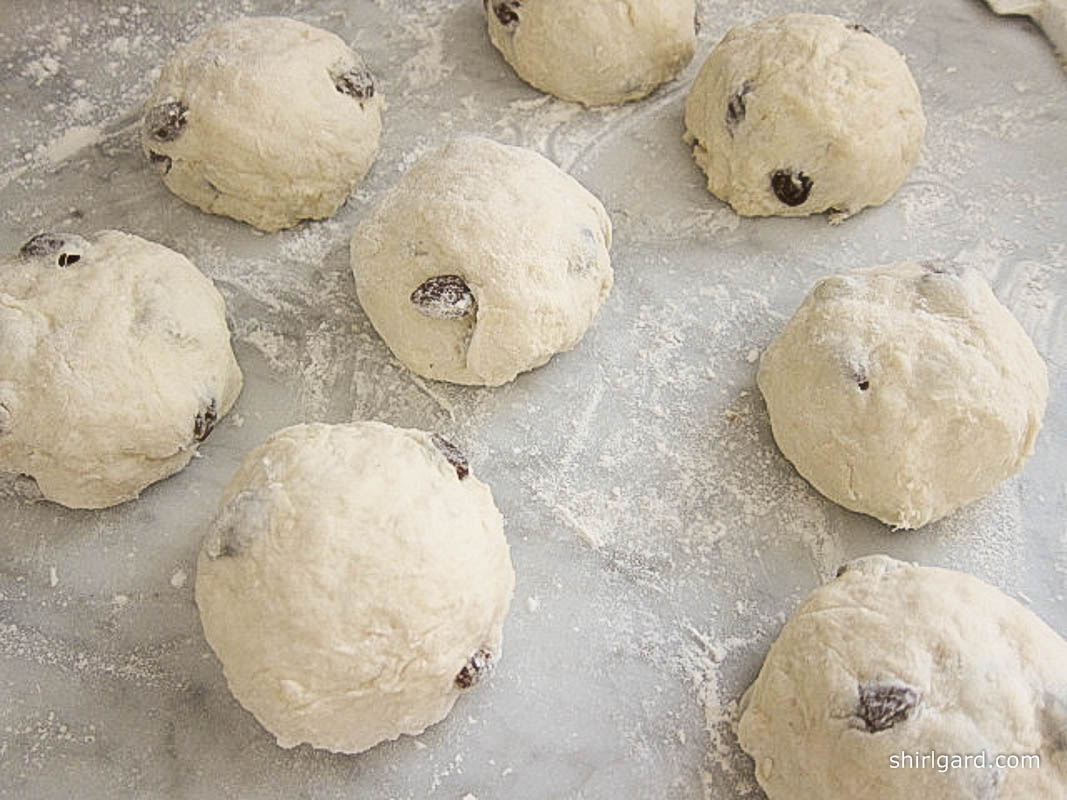 Dough “Rounded up” into Tight Balls 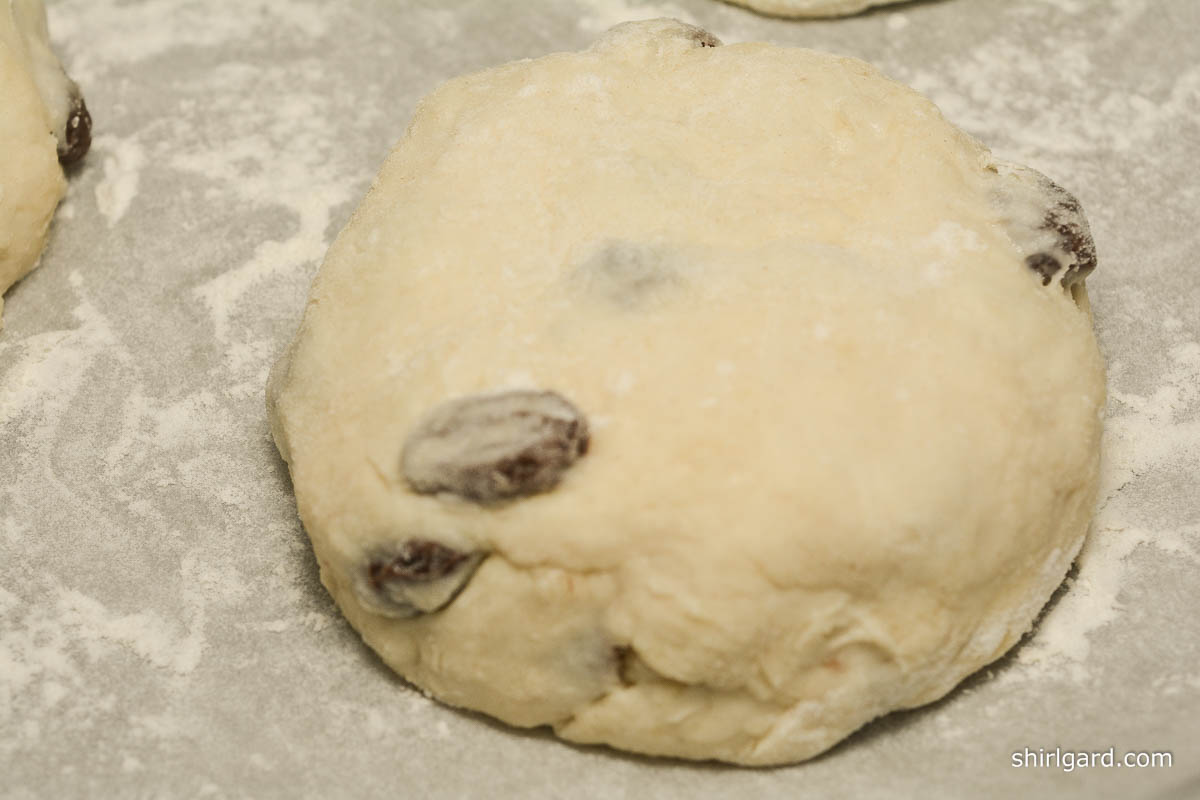 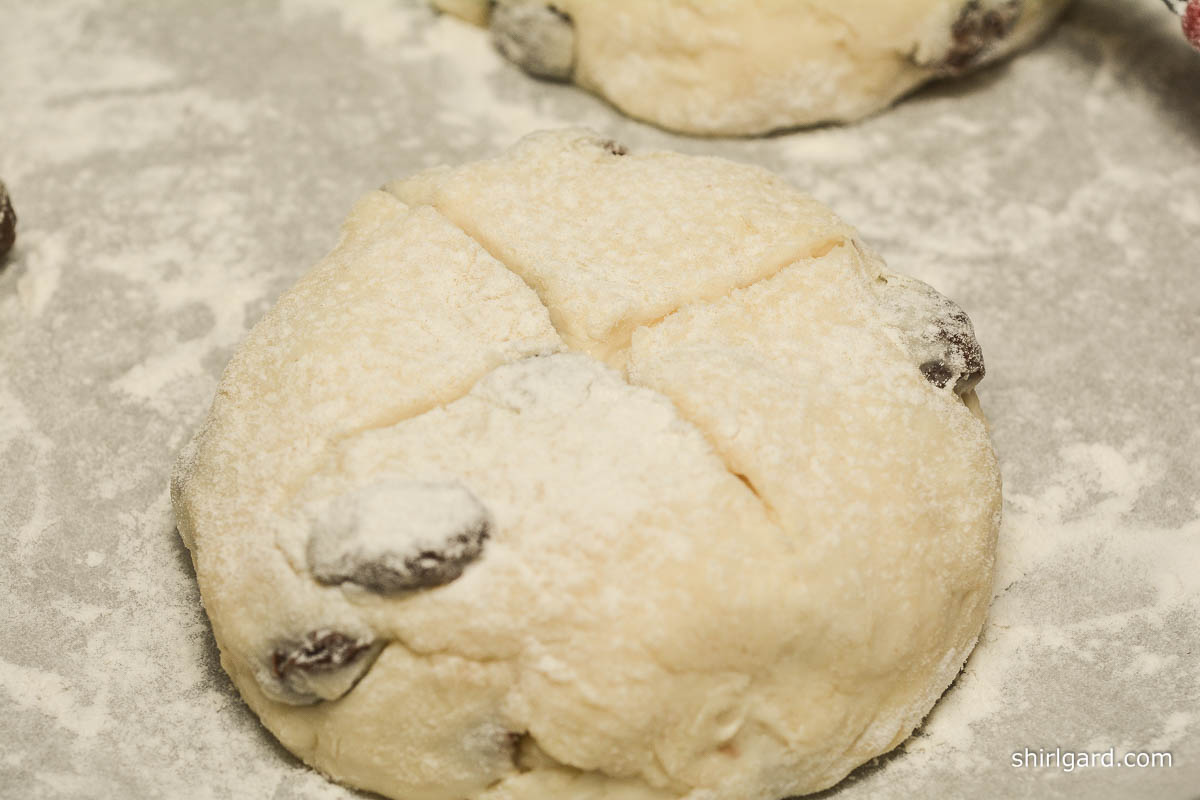 “Cross” Cut on Top to “Ward off Evil” 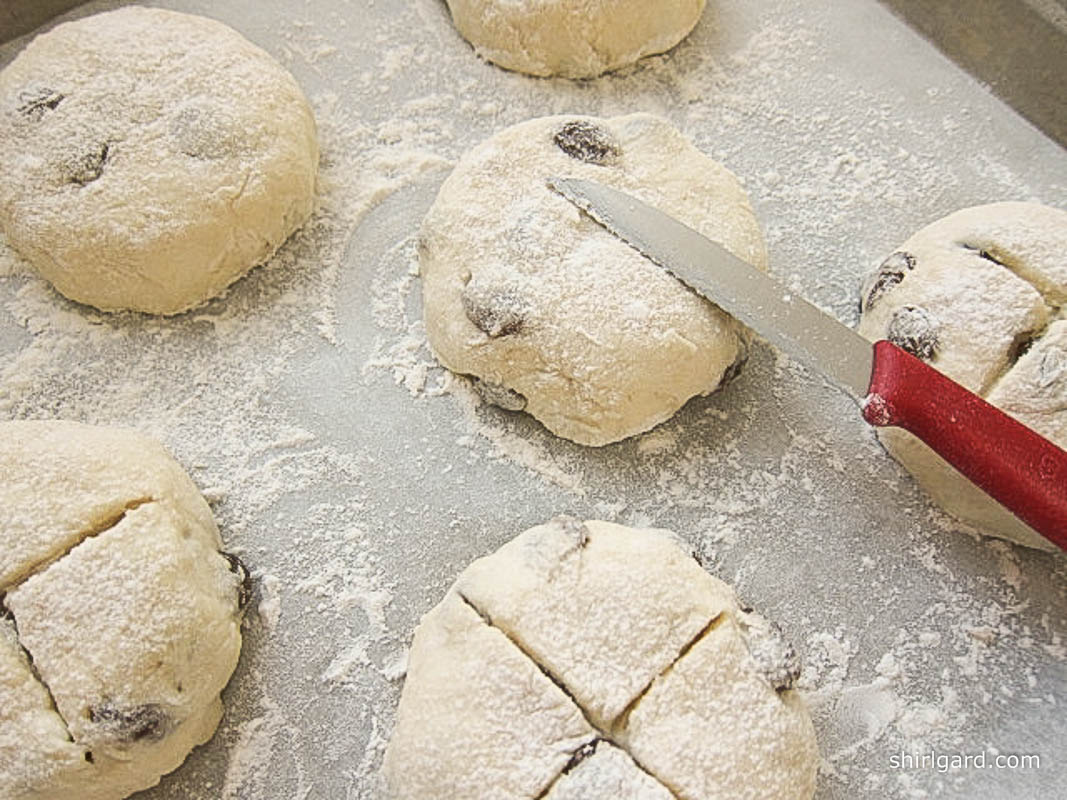 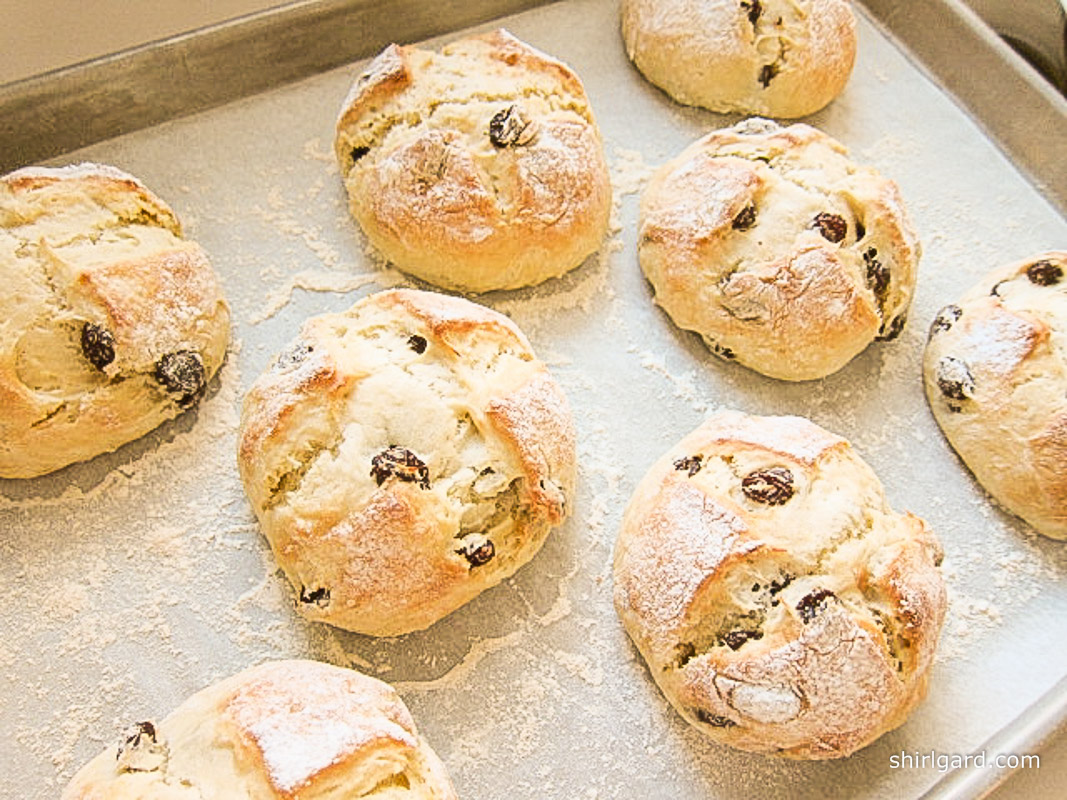 Fresh out of the Oven 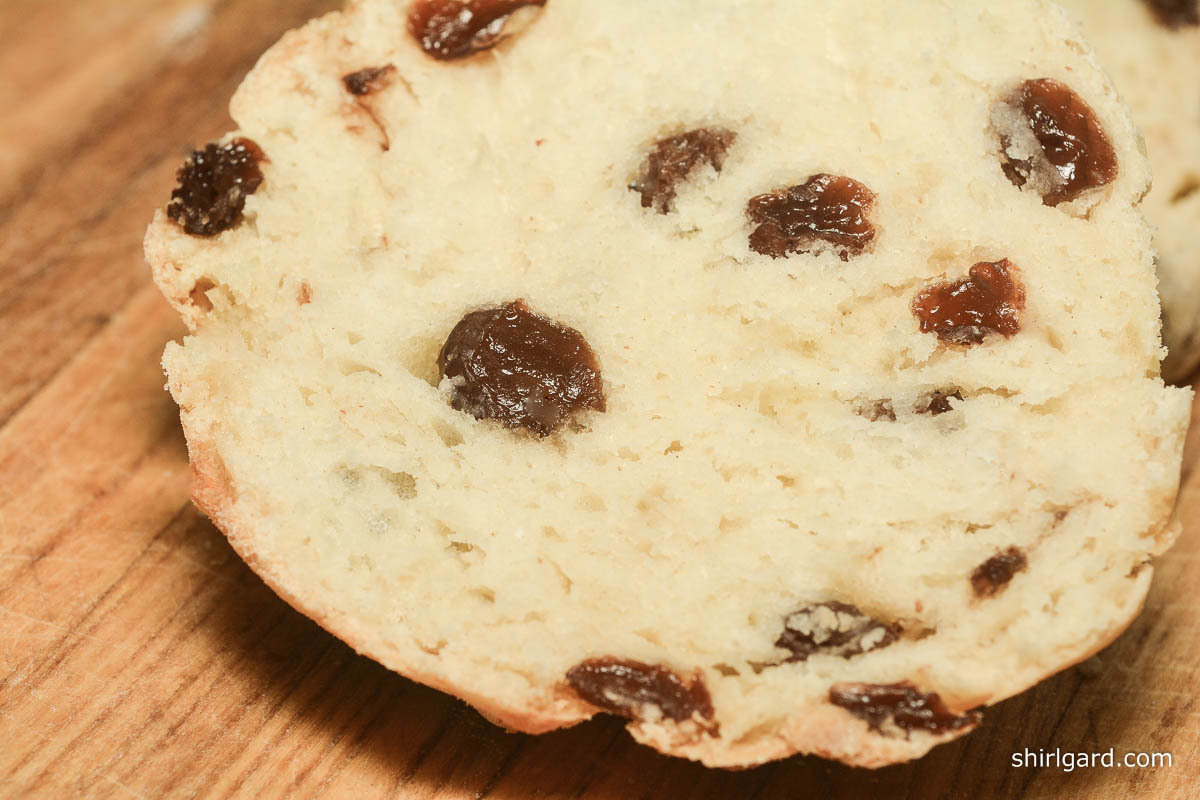 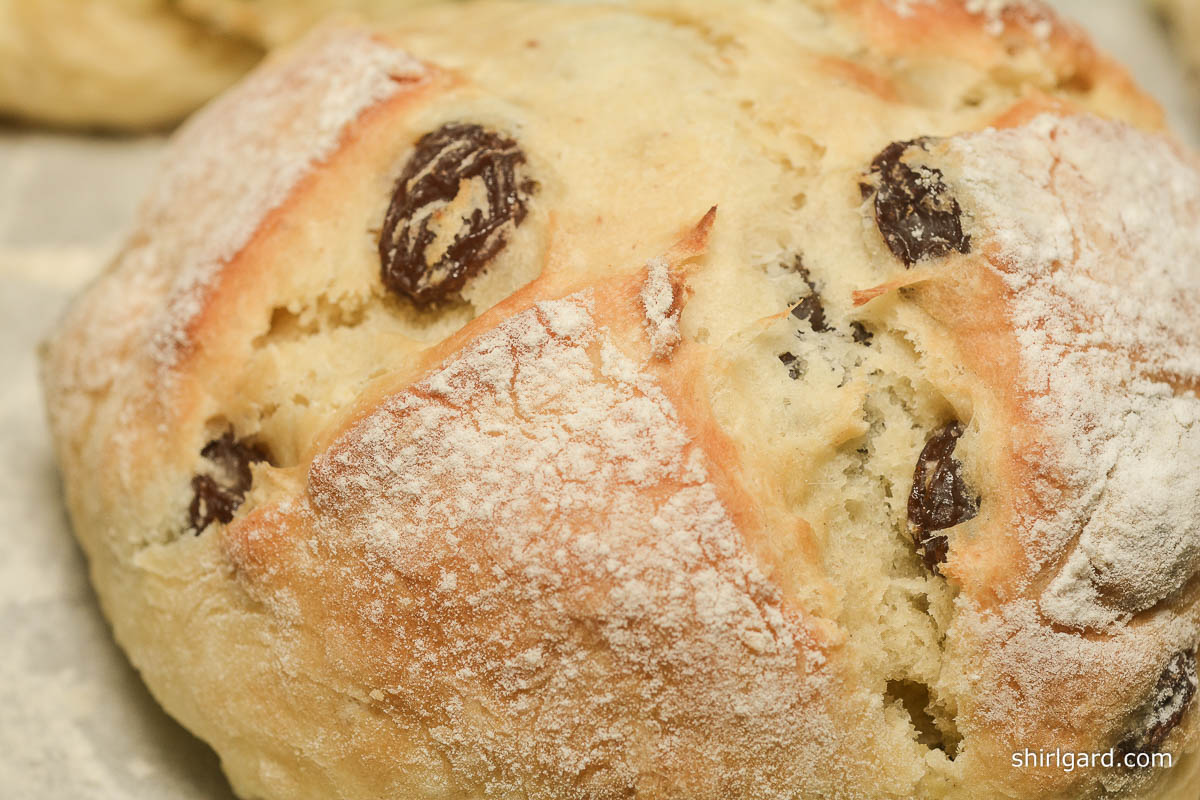 VARIATION #2: LARGE “SEEDY BREAD” LOAF WITH GOLDEN RAISINS
Cutting a deep “cross” (at least a 1/2″ deep and almost to the edges) on top of the rounded dough yields a loaf that “opens up” like a flower. If you want a more compact loaf that doesn’t “open up” as much, cut the “cross only 1/4” deep, like the Brown Soda Bread below. 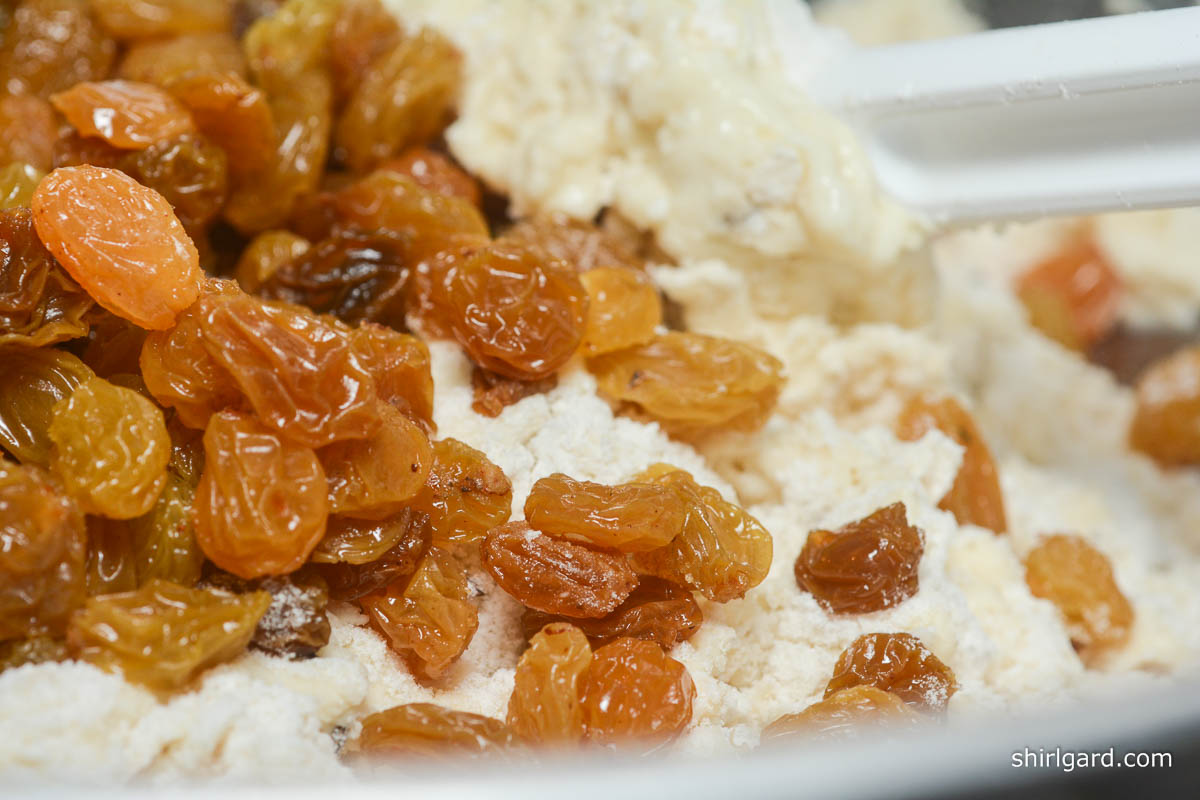 Golden Raisins for this Version 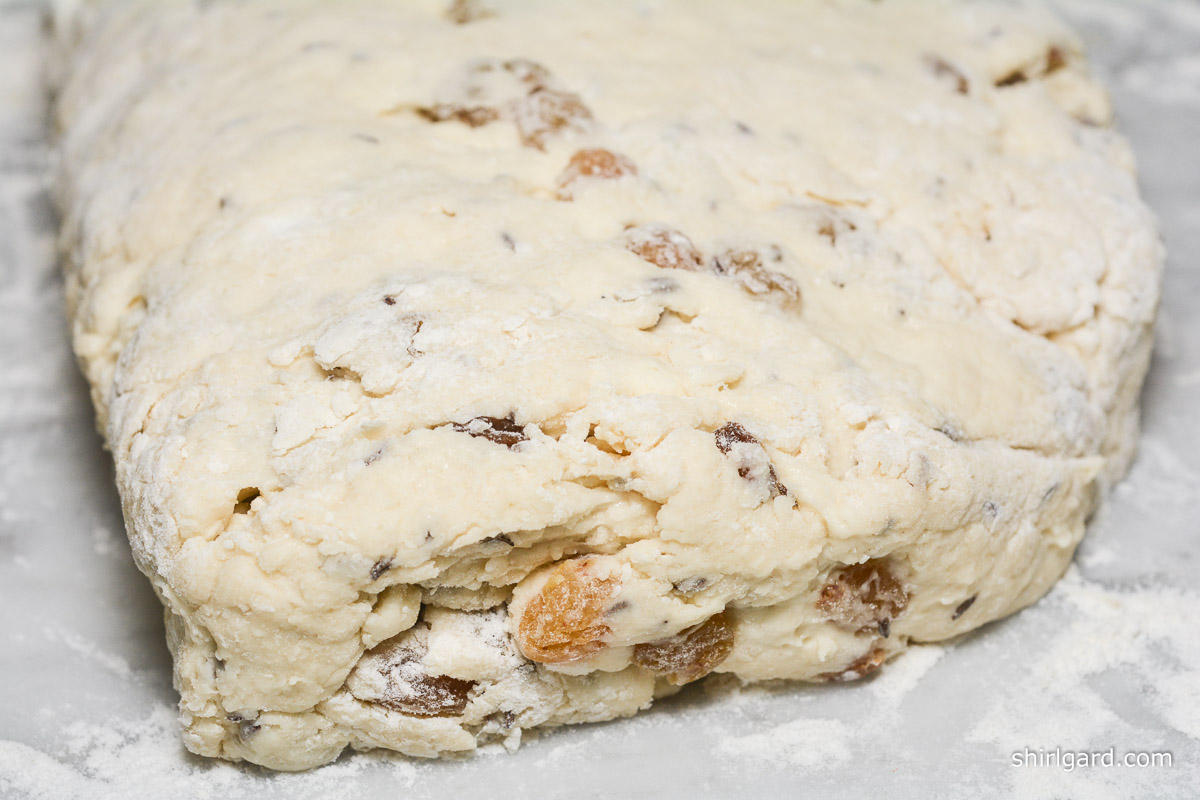 Pat out Dough and Fold in Half 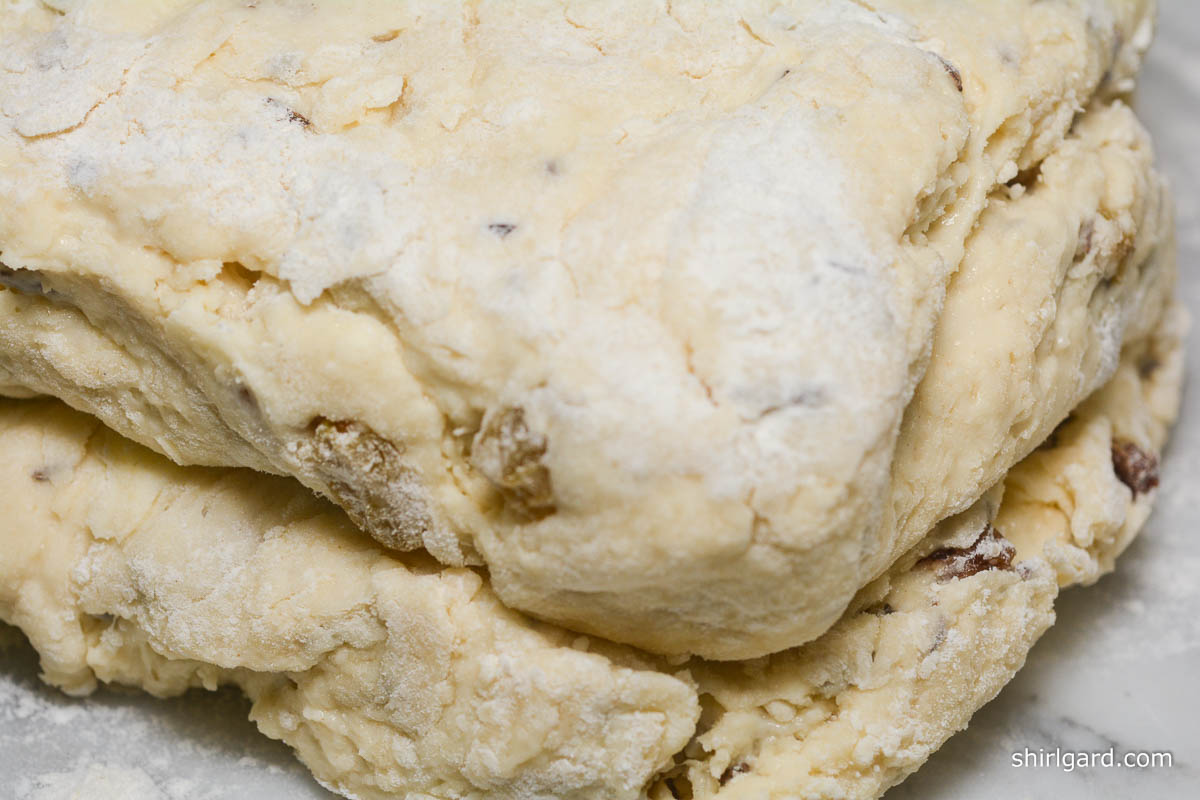 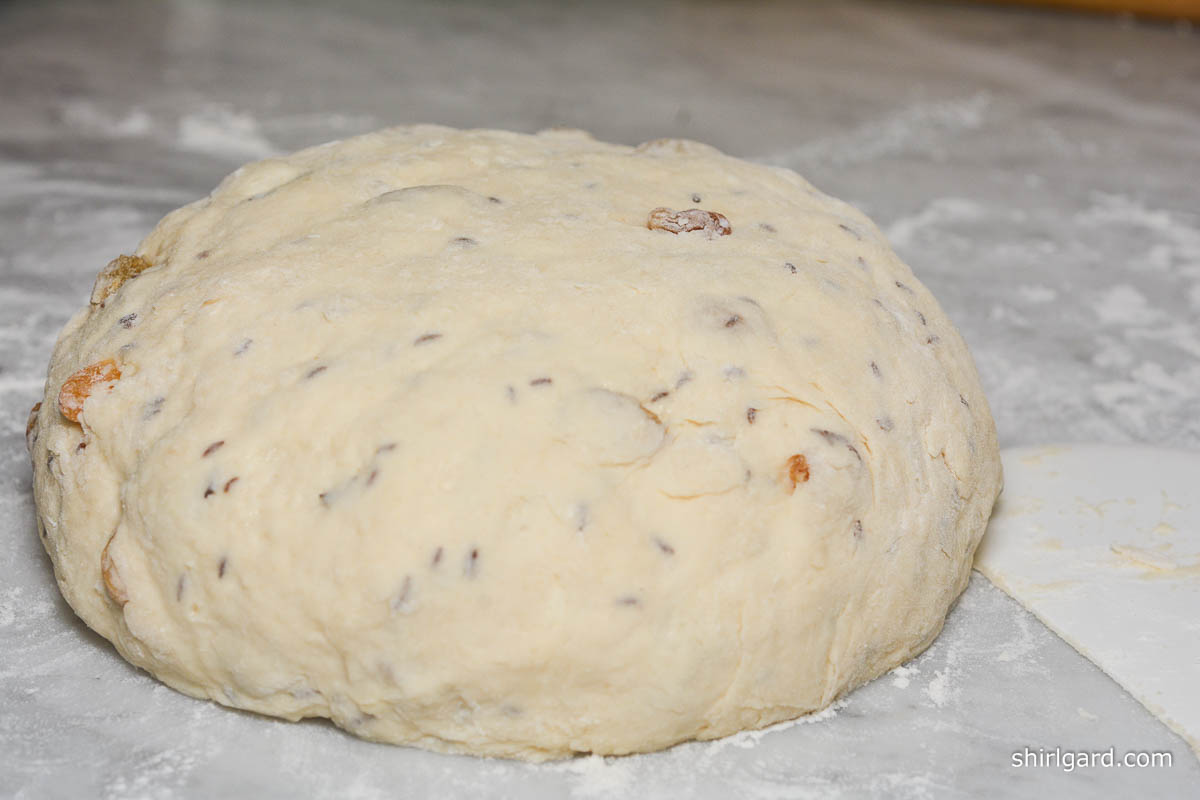 “Round up” into a Tight Ball 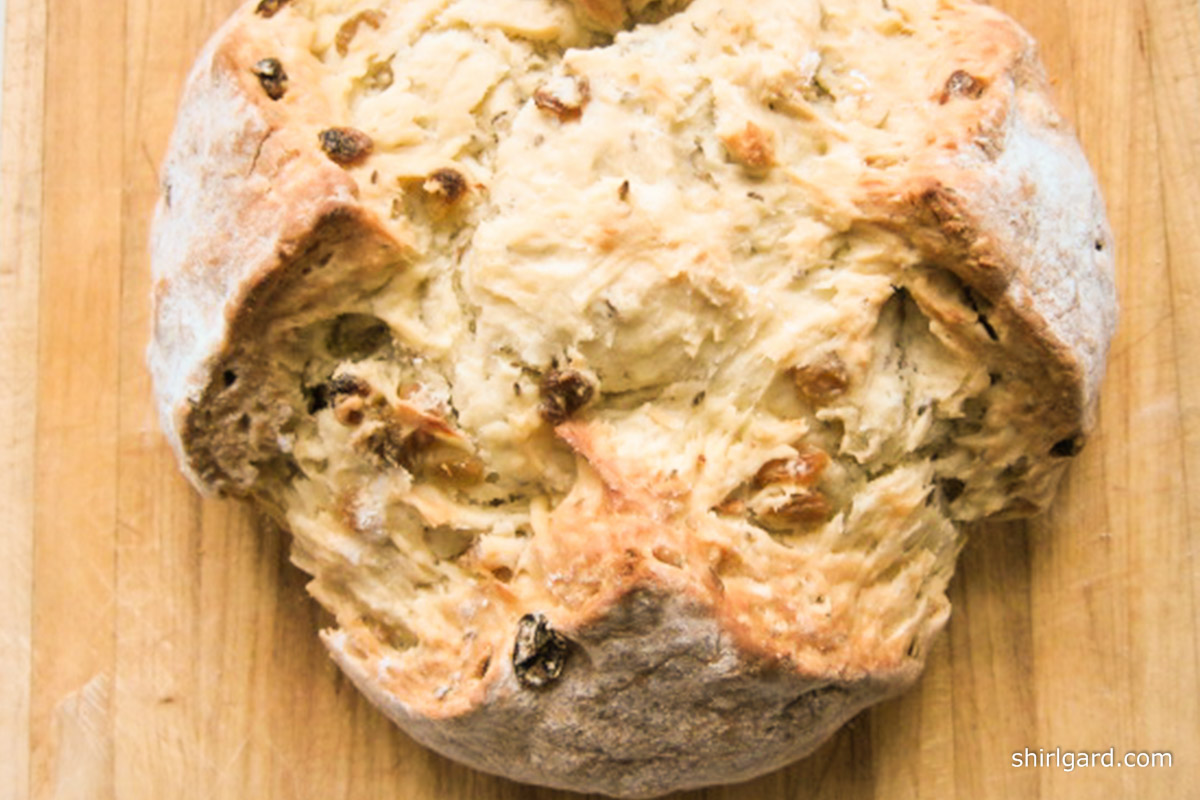 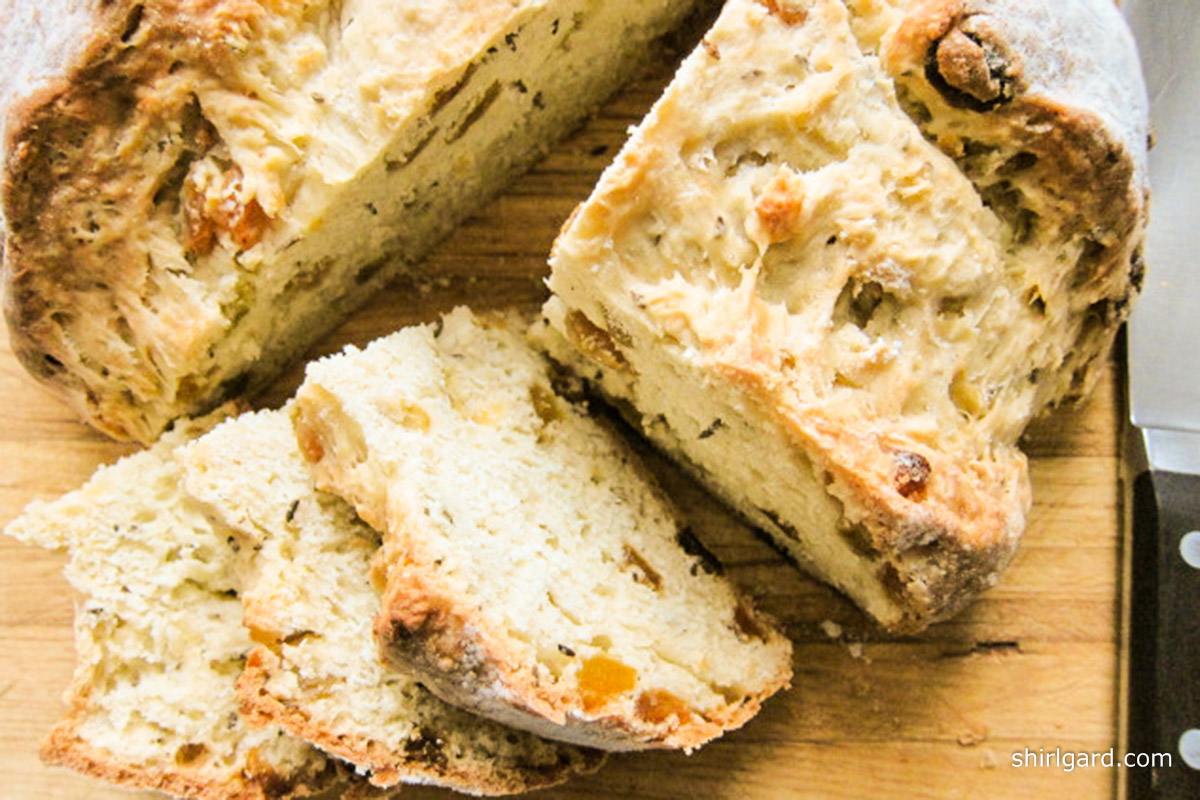 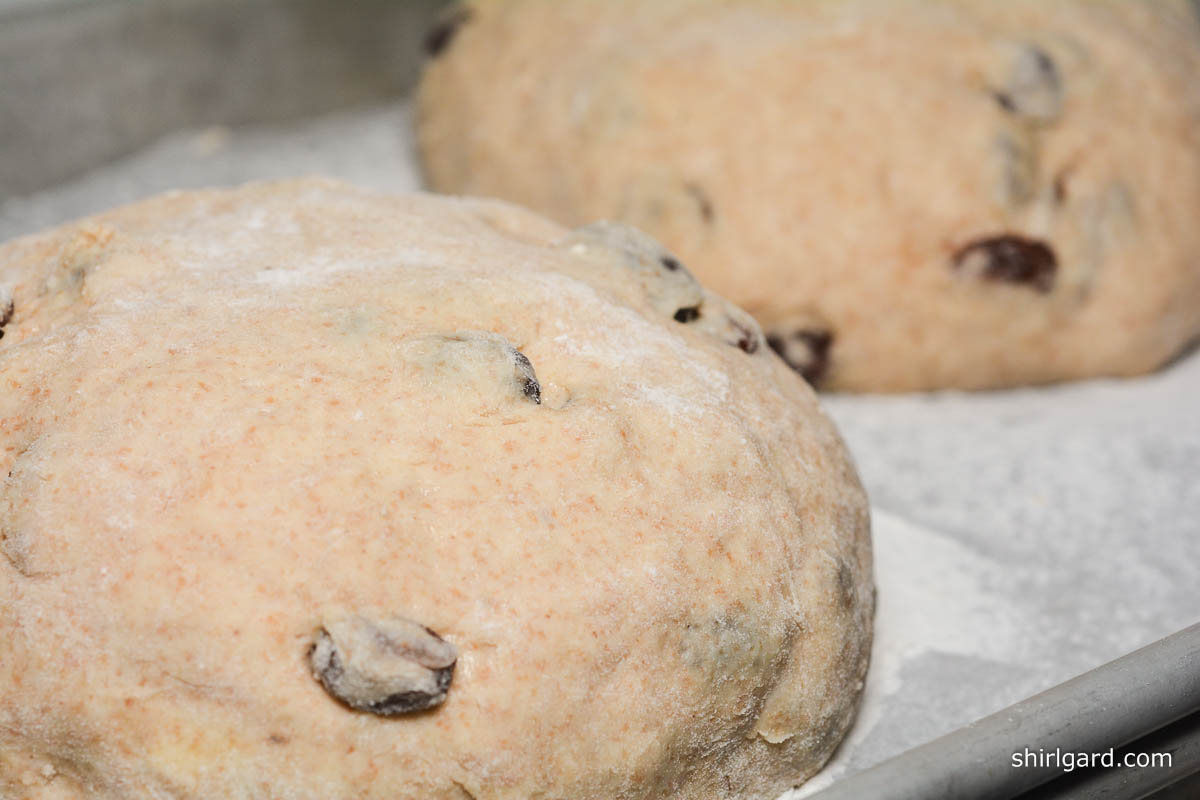 Dough Divided in Half & “Rounded up” 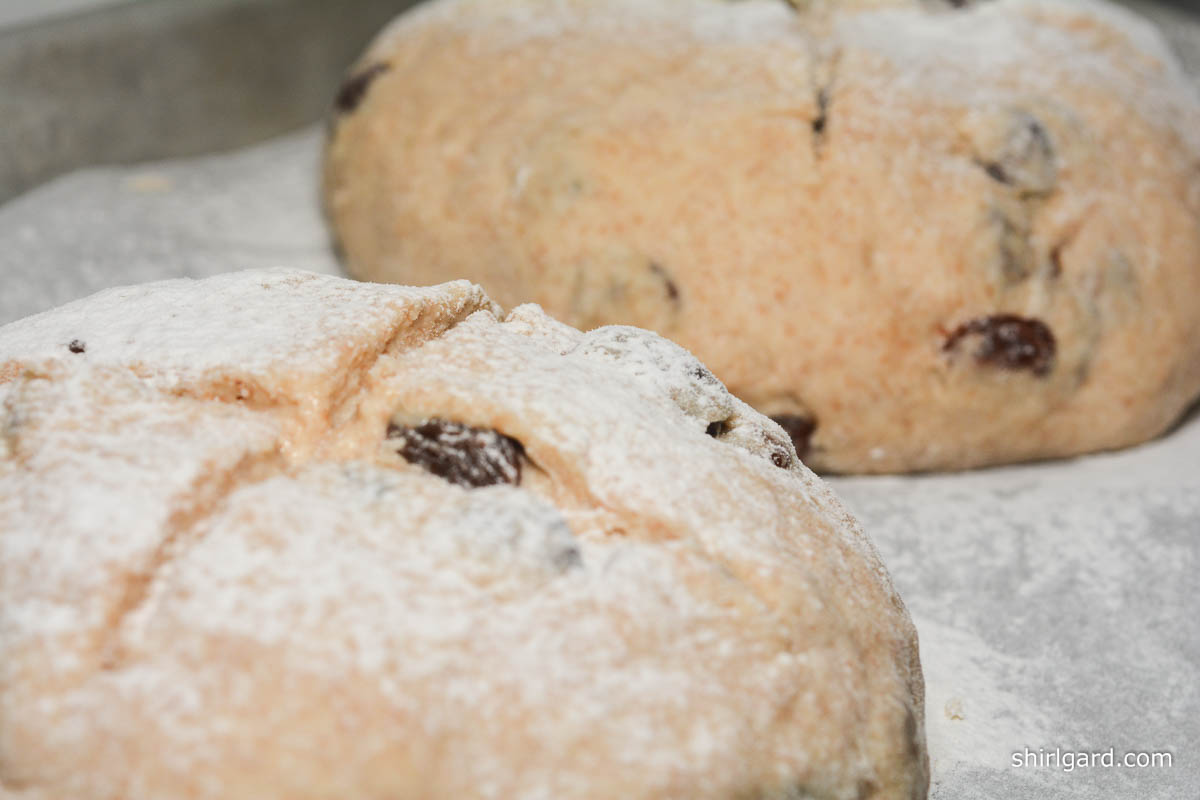 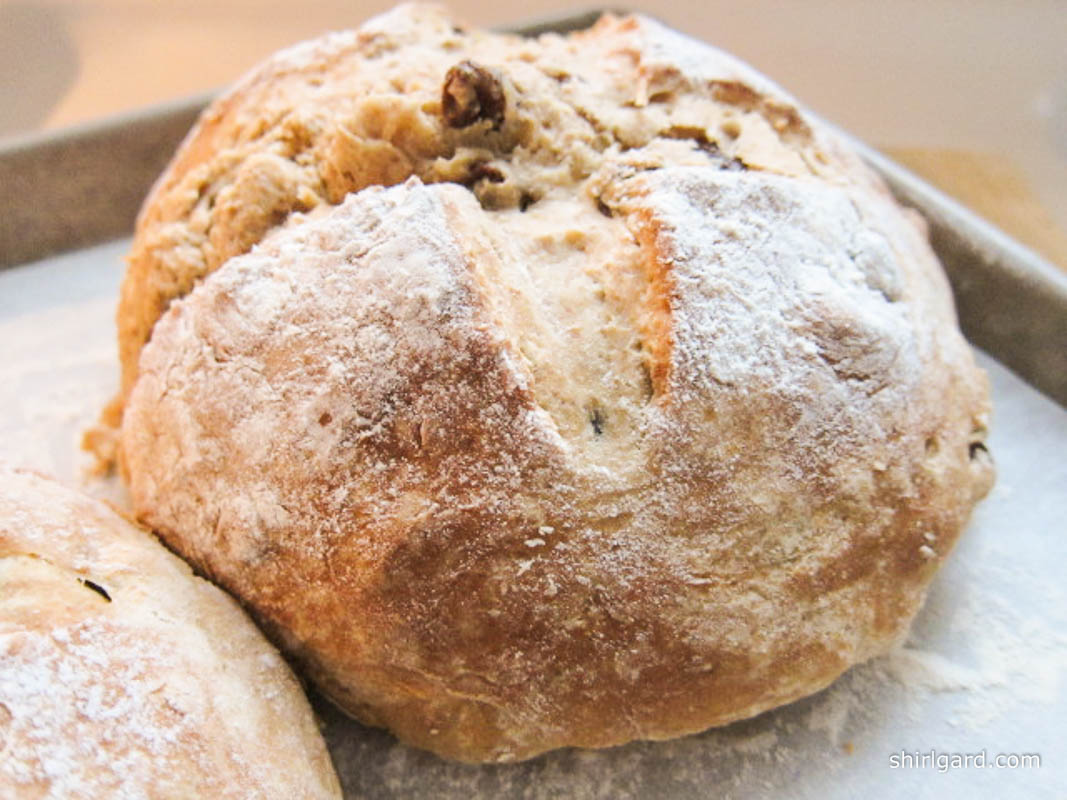 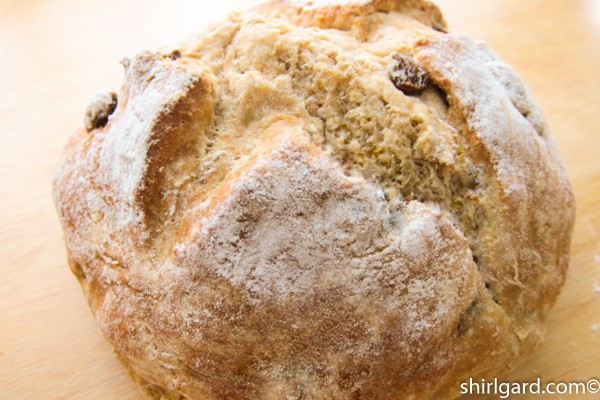 AUTHOR: Shirl Gard
This is an Irish-American version of Soda Bread. Just adding a small amount of butter and a smidge of sugar does a lot for texture and flavor. My preferred blend of flours for the soft wheat flour needed for Soda Bread is 50% unbleached all-purpose flour and 50% pastry flour. As an alternative, you can use 75% unbleached all-purpose and 25% cake flour or 100% bleached all-purpose flour. My favorite version of Irish Soda Bread is "Spotted Puppies", which are small individual scone-like breads. I give three variations here: one for the "Puppies"(with dark raisins), as well as a large round loaf version (with caraway seeds and golden raisins) and a version for two small round loaves (using part whole wheat flour and dark raisins).

YIELD: 8 SMALL INDIVIDUAL SODA BREADS OR 1 LARGE ROUND LOAF OR 2 SMALL ROUND LOAVES
INGREDIENTS
INSTRUCTIONS
Recipe Ancestry Notes:
The proportions in this recipe were adapted from the "Seedy Bread" variation of Irish Soda Bread in Nick Malgieri's How to Bake (1995). The concept of "Spotted Puppies" and "Spotted Dog" come from The Ballymaloe Cooking School Cookbook by Darina Allen (2002).
3.5.3208 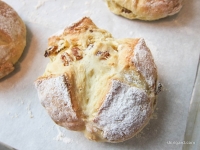