There are many well-known ratios in cooking and baking; I learned about ratios in cooking school and have used them ever since. Probably the best explanation of ratios that I have seen is a paperback called Ratio by Michael Ruhlman (2009), which explains “the simple codes behind the craft of everyday cooking”. In this handy little book, Ruhlman includes many cooking ratios such as: “Stock = 3 parts water : 2 parts bones, Roux = 3 parts flour : 2 parts fat, and Vinaigrette = 3 parts oil : 1 part vinegar”. There’s also a lot for a pastry person to love about this hand-book, from the dough ratios (bread dough, pie dough, cookie dough) to the batter ratios (cakes, quick breads, pancakes) to the various custard ratios.

The most famous of all ratios, the one known by many people who are neither cooks or bakers, is the equal-parts ratio for pound cake: Pound Cake = 1 part butter : 1 part sugar : 1 part egg : 1 part flour. To use Pound Cake as an example and translate the ratio into a recipe, several things are necessary. First, you need a scale, because ratios are always by weight: 1 pound butter, 1 pound sugar, 1 pound eggs, and 1 pound flour. Another thing that you need is to have a working knowledge of the correct mixing method (“creaming method” in this case) or cooking technique to use, as well as a knack for seasoning and flavoring. Depending on the whim and creativity of the cook or baker, other ingredients may be added to this basic Pound Cake ratio, such as vanilla extract, lemon flavorings, or even a small amount of baking powder to lighten the texture a little. Ratios are not finished recipes. Consider them a “jumping off” place or just the beginning of “something big” (we hope!); they can be the basic “back-stage” framework for recipes. As Michael Ruhlman says in his book, “Ratios liberate you—when you know the ratio and some basic techniques, then you can really start to cook (229)”.

The reason for all of this “ratio” talk is that I had a certain cookie that I was determined to replicate and I needed to figure out how to do it; I needed a “ratio” to get me started. Regarding the background of this “certain” cookie, I noticed that every time I went to the local grocery store here in Lenox, I was picking up a little box of three cookies called “Almond Joy” Cookies. There is also a chocolate version called “Mounds” Cookies. These cookies are only $1.00 each, but this adds up if you buy 2 boxes @ $2.99 each and every week or more. Even though these cookies are the kind where they scoop a pre-made dough and bake them off in the store, they are addictive. I would call them a hybrid, a cross between a coconut macaroon and a chocolate chip cookie. Chewy (check). Crunchy (check). Coconut-y (check). Chocolate-y (check). Yummy (check).

My first try at making these cookies didn’t work out at all. I only baked a few cookies from my bowl of dough just for tasting, but after sampling one, I knew I had to start over. Although tasty and crunchy, they were too puffy and too cake-y to match the “certain” cookies that I was looking for. Oops! It turns out, I used the wrong ratio (1 : 1 : 1 – Equal parts coconut, sugar, and egg). The rest of this dough sat in my refrigerator for a few days before I finally just baked it off in a mini muffin pan with a “kiss” plopped on top of each one in order not to waste the dough, but baked this way, the ratio worked and some crunchy little cakes were born.

To re-start my cookie mission, I went to the store and asked the owner if I could see the ingredient list for the “Almond Joy” cookies. That’s when he brought out a 20# box of dough and set it on the counter so I could read the list, which I carefully wrote down. Back at home, when I studied the list, based on the arrangement of the ingredients (coconut was listed first, sugar second, and eggs third), I realized that I could use a Coconut Macaroon ratio as a basis, just “filling in” with other things such as butter, chocolate chips, and almonds to make them more cookie-like. A ratio is especially handy to have when you want to create something new, from scratch, like these cookies; this is the ratio I used to get started: Coconut Macaroons = 3 parts coconut : 2 parts sugar : 1 part egg whites. I began typing the recipe: 300 grams coconut, 200 grams sugar, and 100 grams eggs, but even though I had what I thought was the right ratio, it didn’t automatically produce the perfect cookie and the right result the first time. It took a few tries and quite a few tweaks to get them to taste the way I wanted, so I hope you like their chew-y crunch (chew-y in the center and crunchy on the edges) as much as I do. I didn’t mind at all tasting the discards along the way. 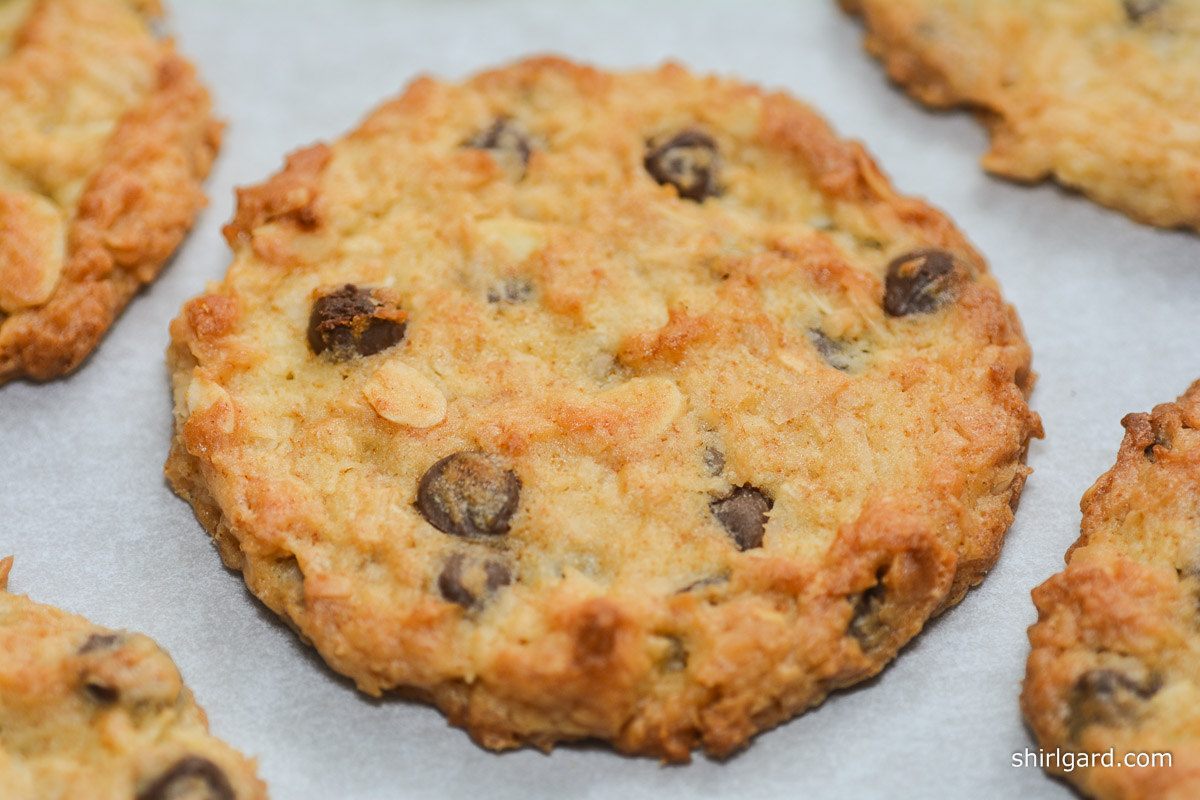 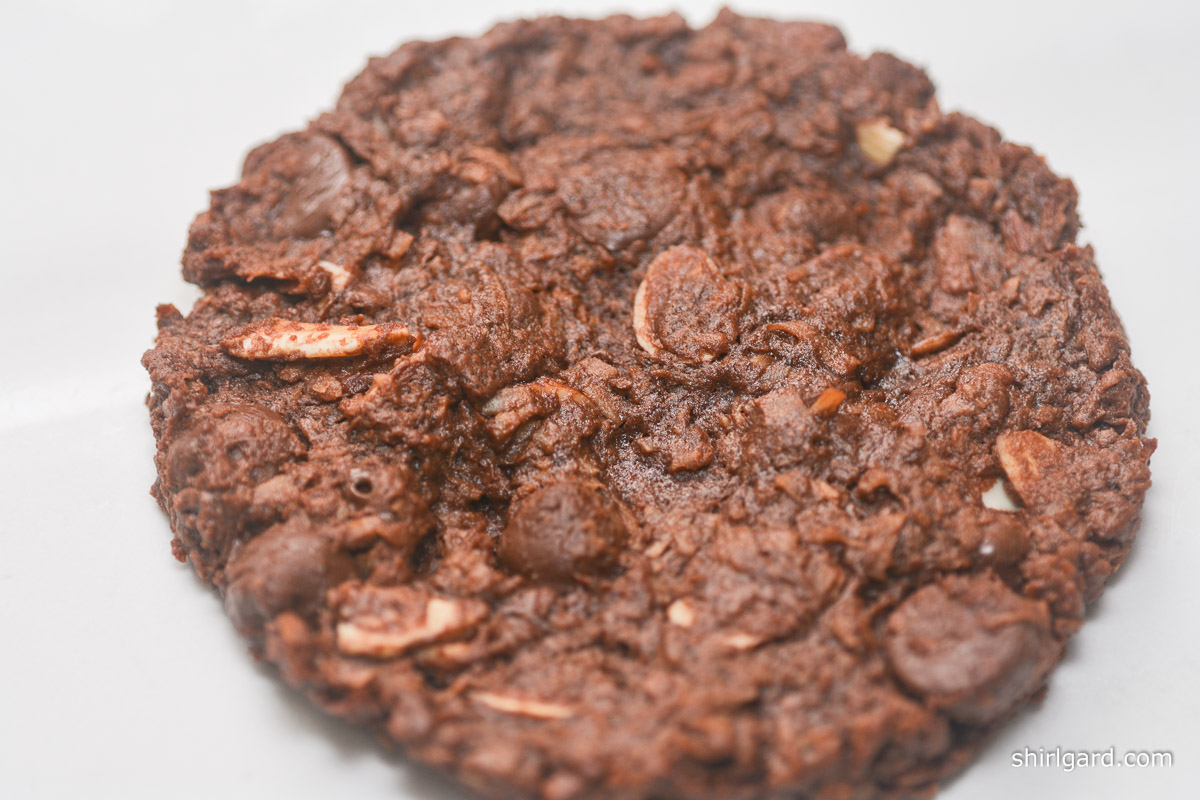 Note: There are many other ratios for Coconut Macaroons, but the one that I used here is from Baking & Pastry: Mastering the Art and Craft by The Culinary Institute of America (2004). This is the current edition. 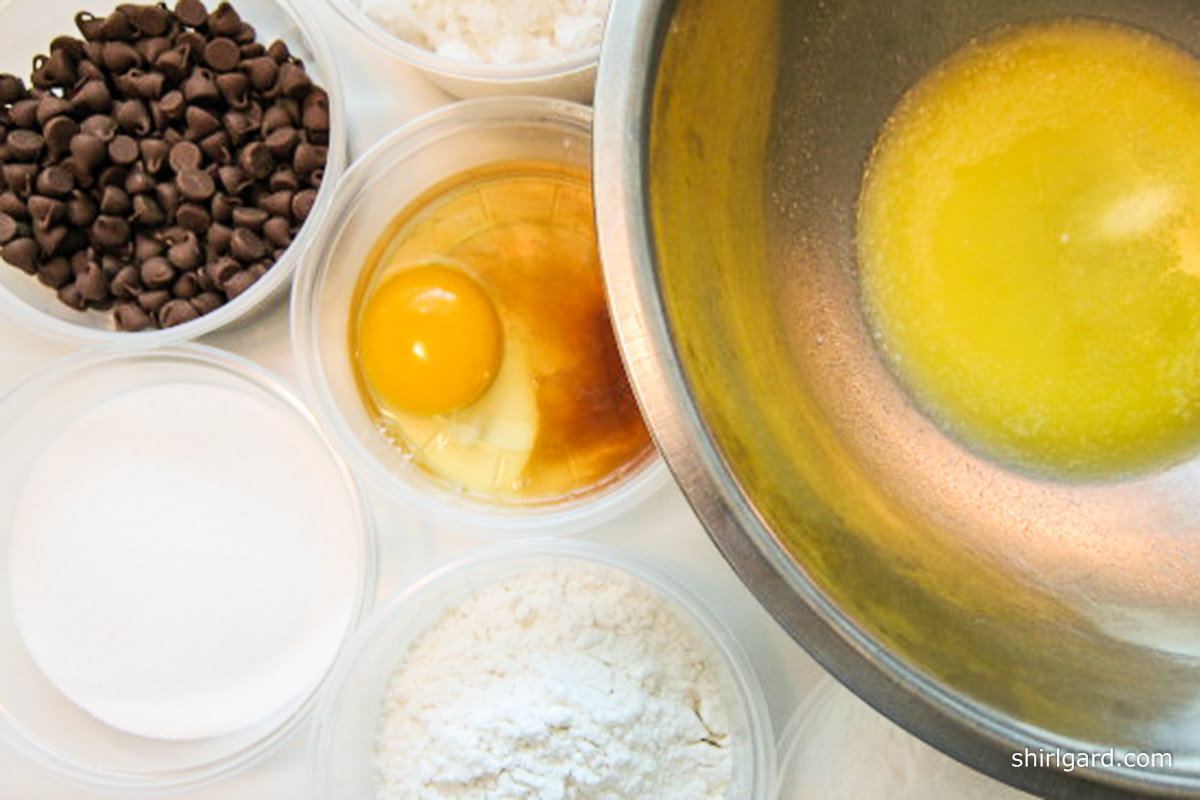 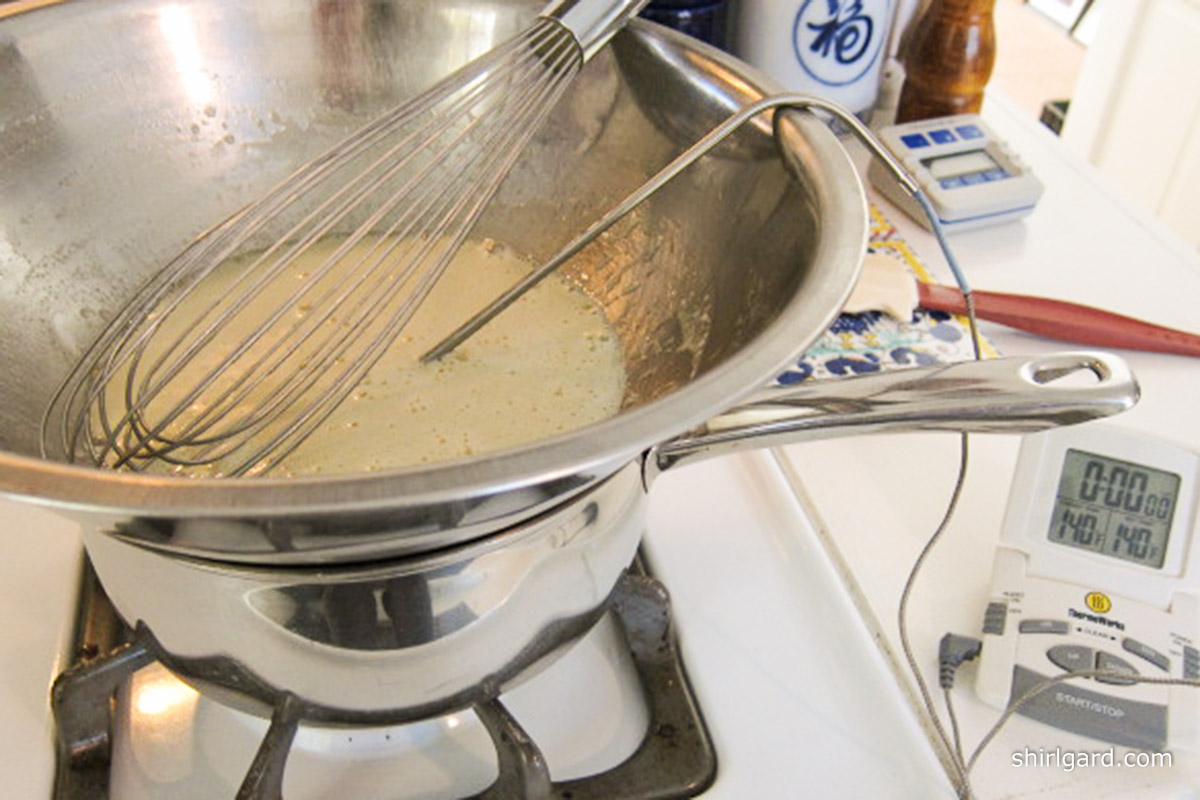 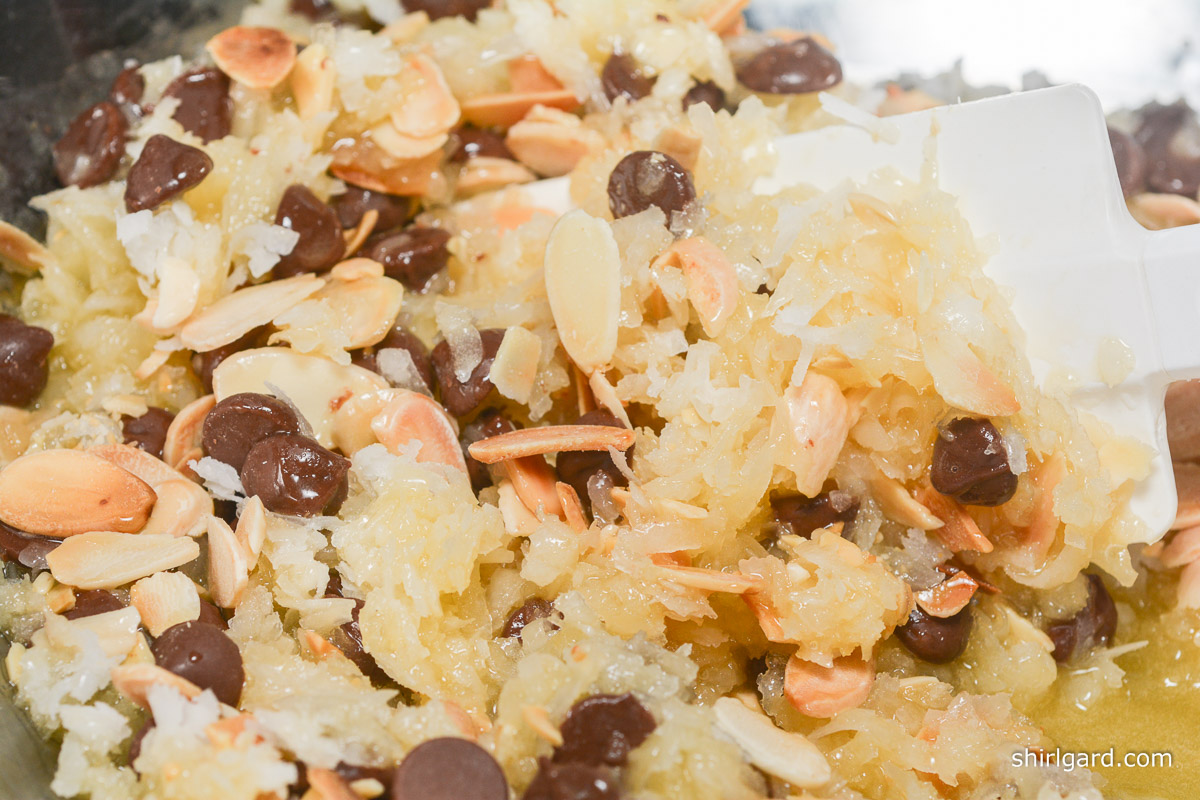 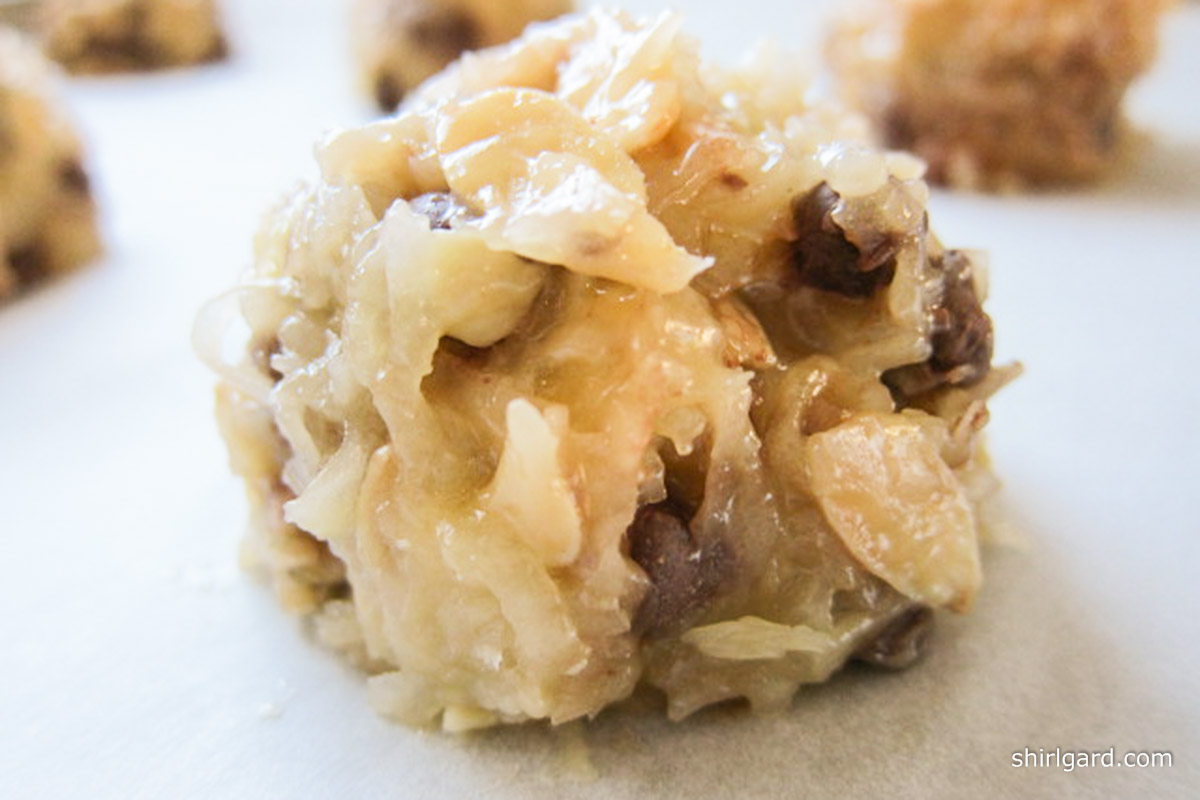 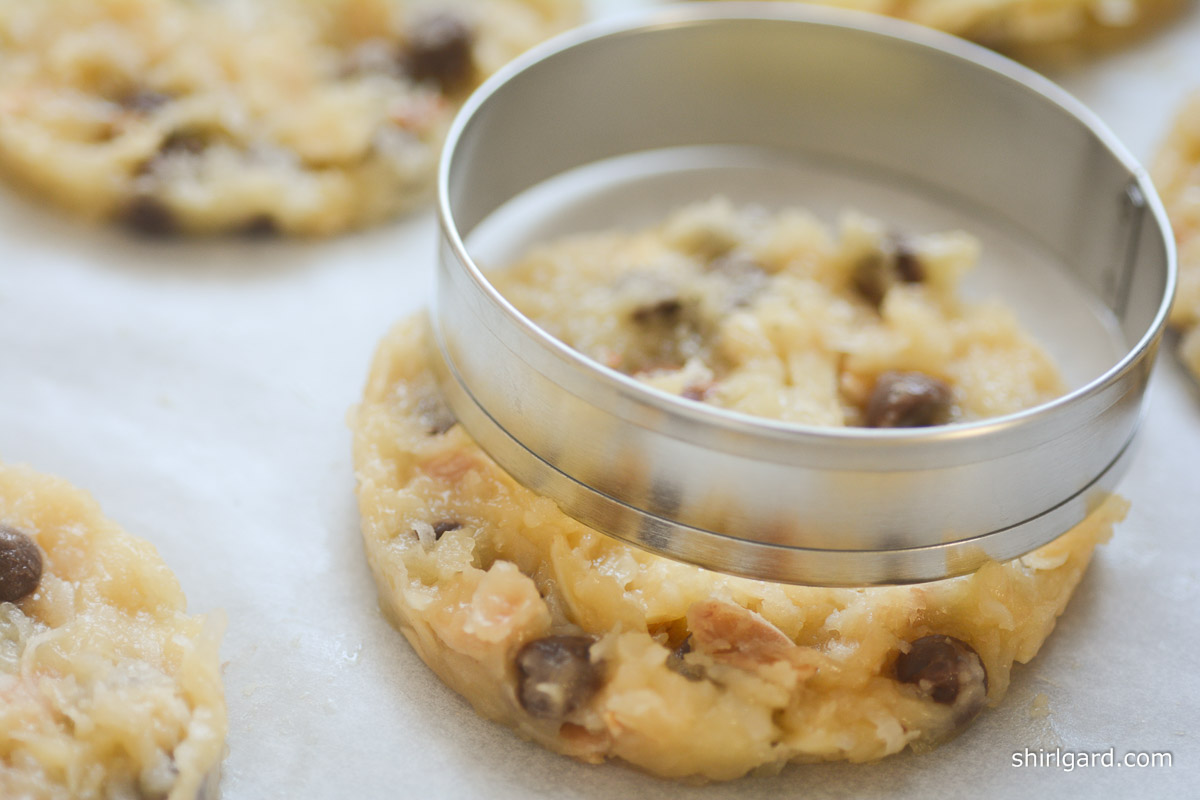 Use an English Muffin Ring to Shape 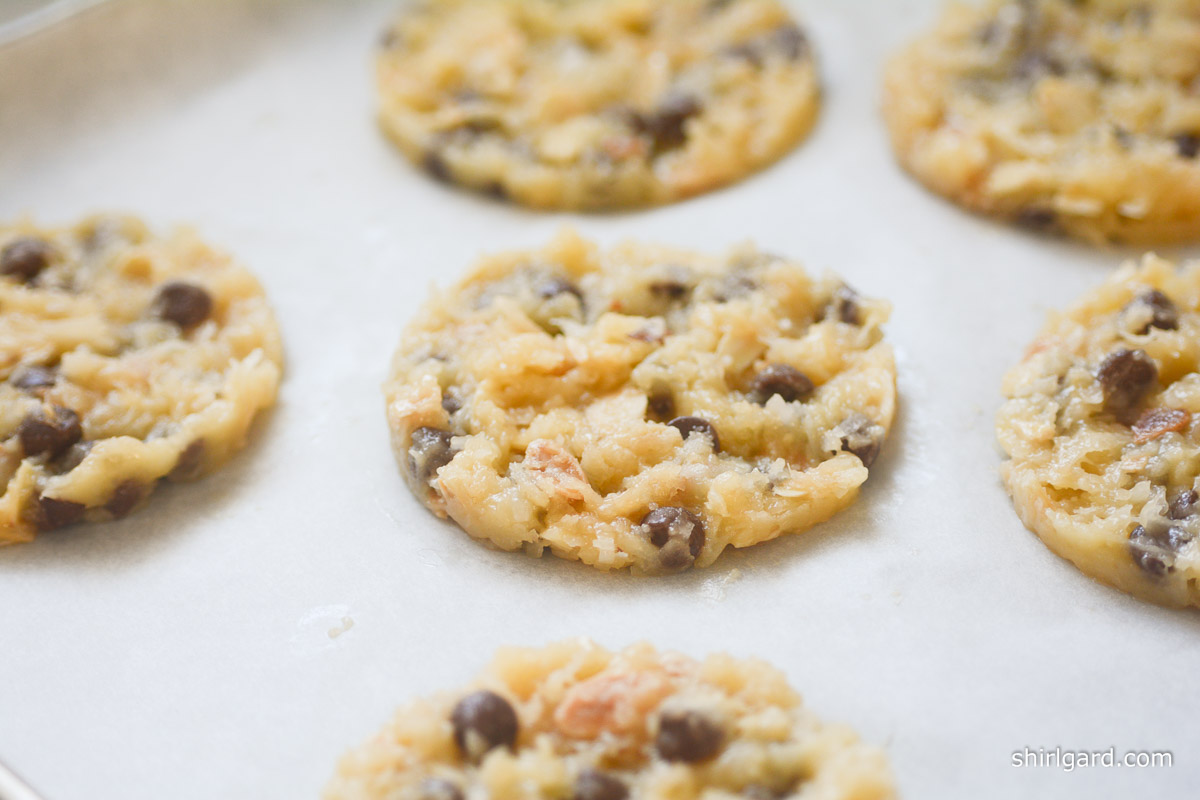 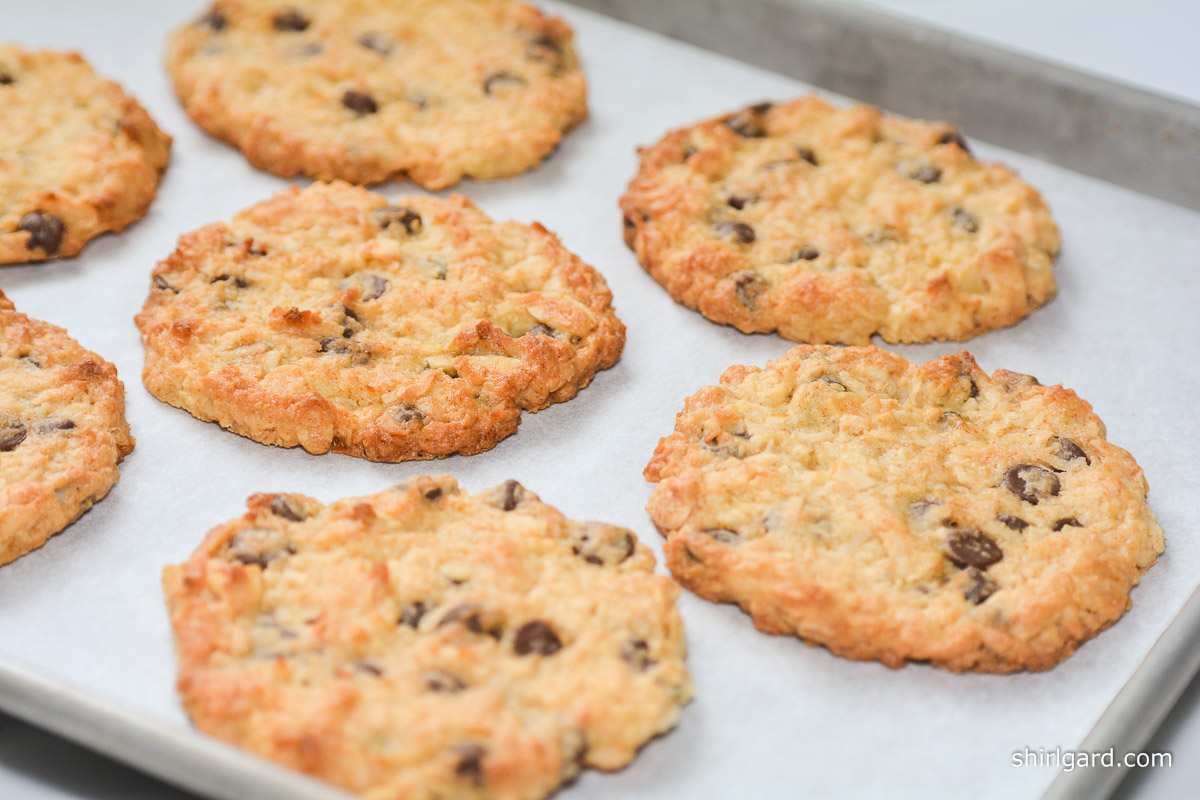 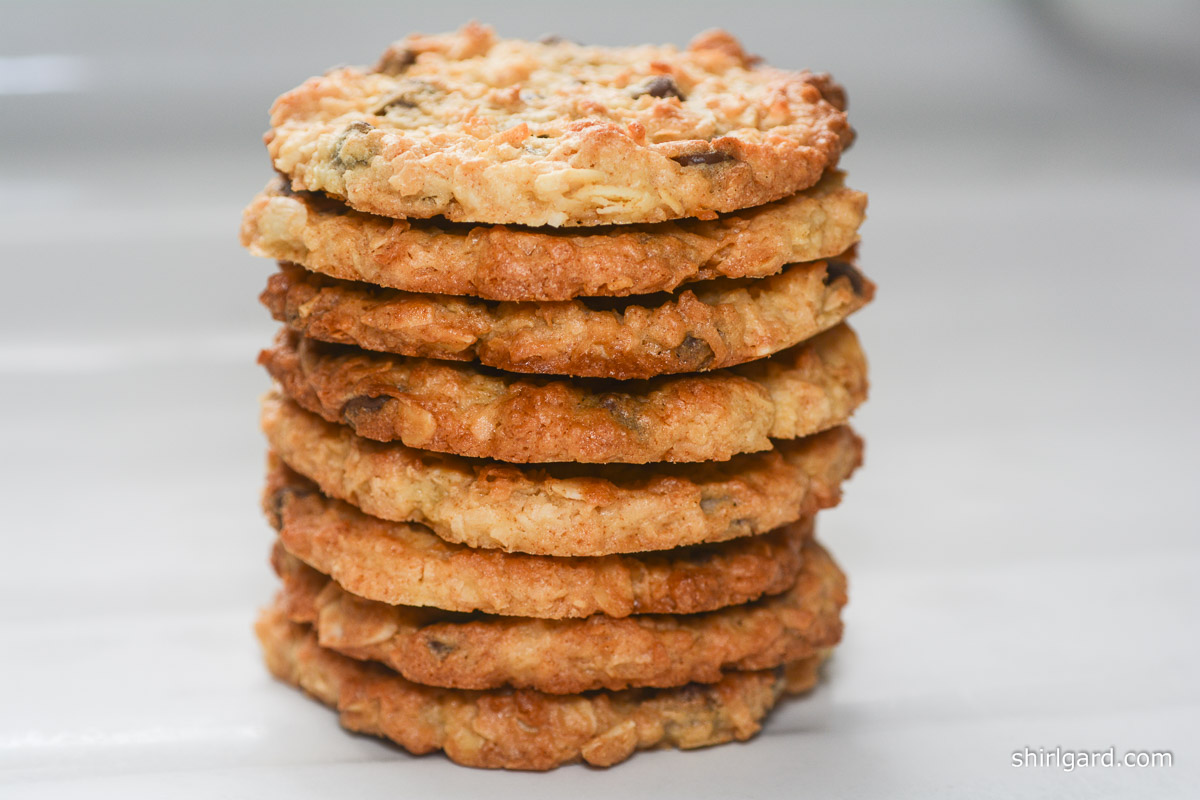 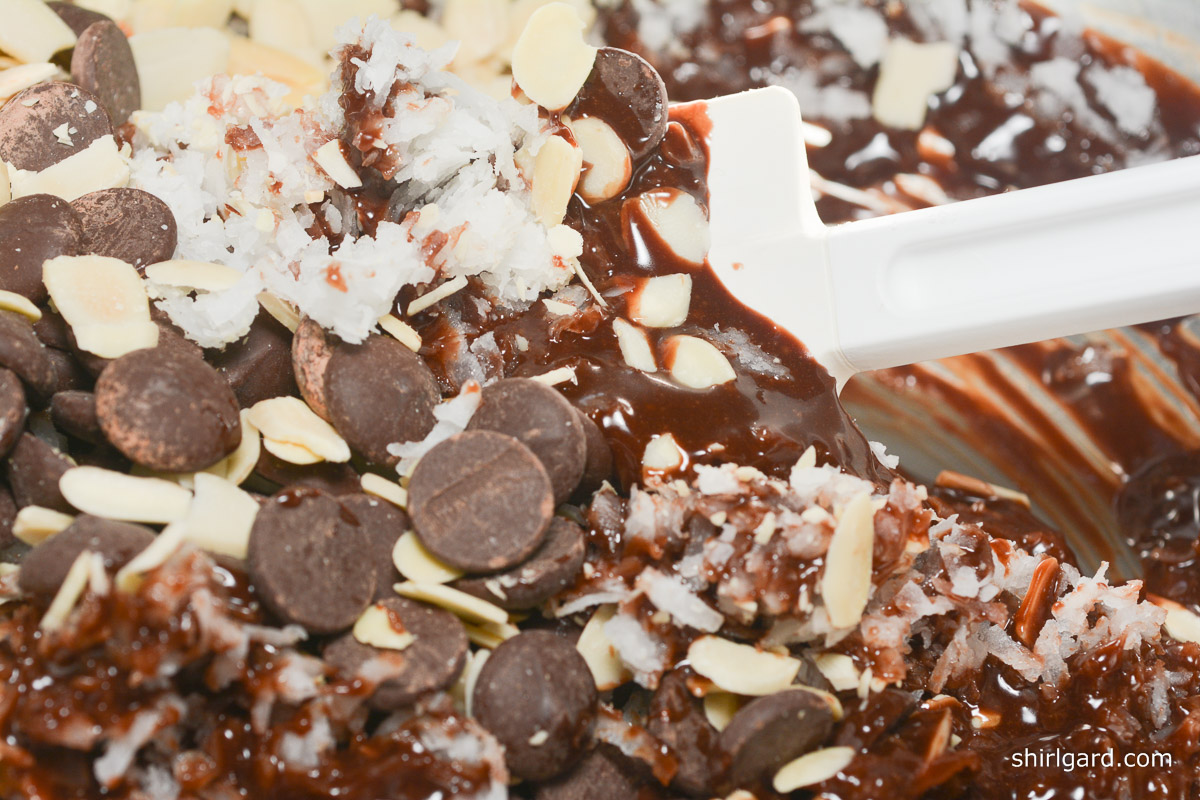 Mixing in the Chocolate 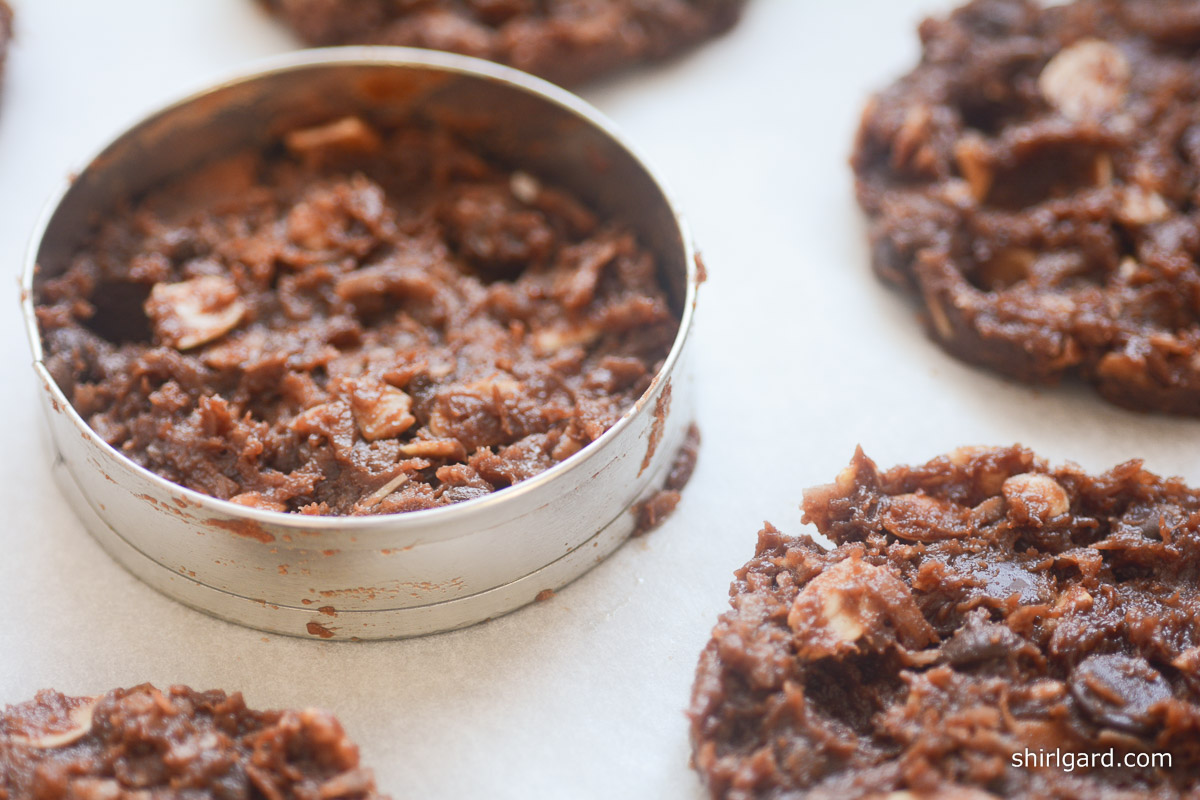 Shaped with an English Muffin Ring 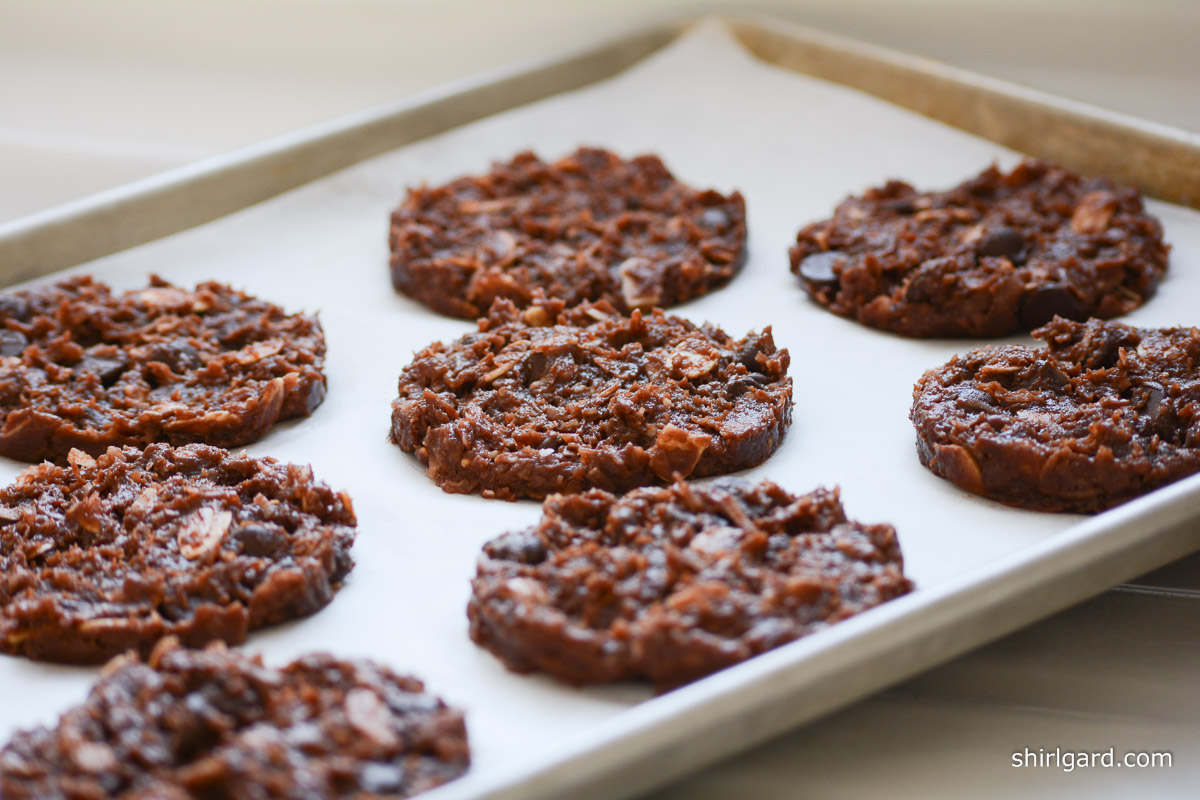 AUTHOR: Shirl Gard
YIELD: 16 COOKIES - 75g (2½ oz) EACH
INGREDIENTS
INSTRUCTIONS
Recipe Ancestry Notes:
This is a Shirl Gard original recipe that was created by starting with a 3 : 2 : 1 Ratio for Coconut Macaroons (3 parts coconut, 2 parts sugar, and 1 part egg white). This ratio comes from Baking & Pastry: Mastering the Art and Craft by The Culinary Institute of America (2004).
3.5.3208 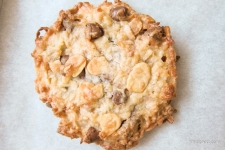 Thank you for stopping by. Enjoy!