A Big Bowl of Hospitality: Caramel Popcorn with Cashews & Cranberries

As I was thinking about a story that would illustrate this recipe, I thought of a long ago and far away food memory involving my Great Aunt Jen………

When I was growing up, our family was always taking road trips. There were five of us, Mother and Daddy, and the three kids: my younger brother Dan Jr., my little sister Kay, and myself. On one particular trip that I remember, we headed north from our house in northeastern Oklahoma to Murray, Nebraska to visit Aunt Jennie, who was Daddy’s aunt and my great aunt. For me, that trip to see Aunt Jennie was all about the food, and where, as a little girl, I learned the definition of hospitality. 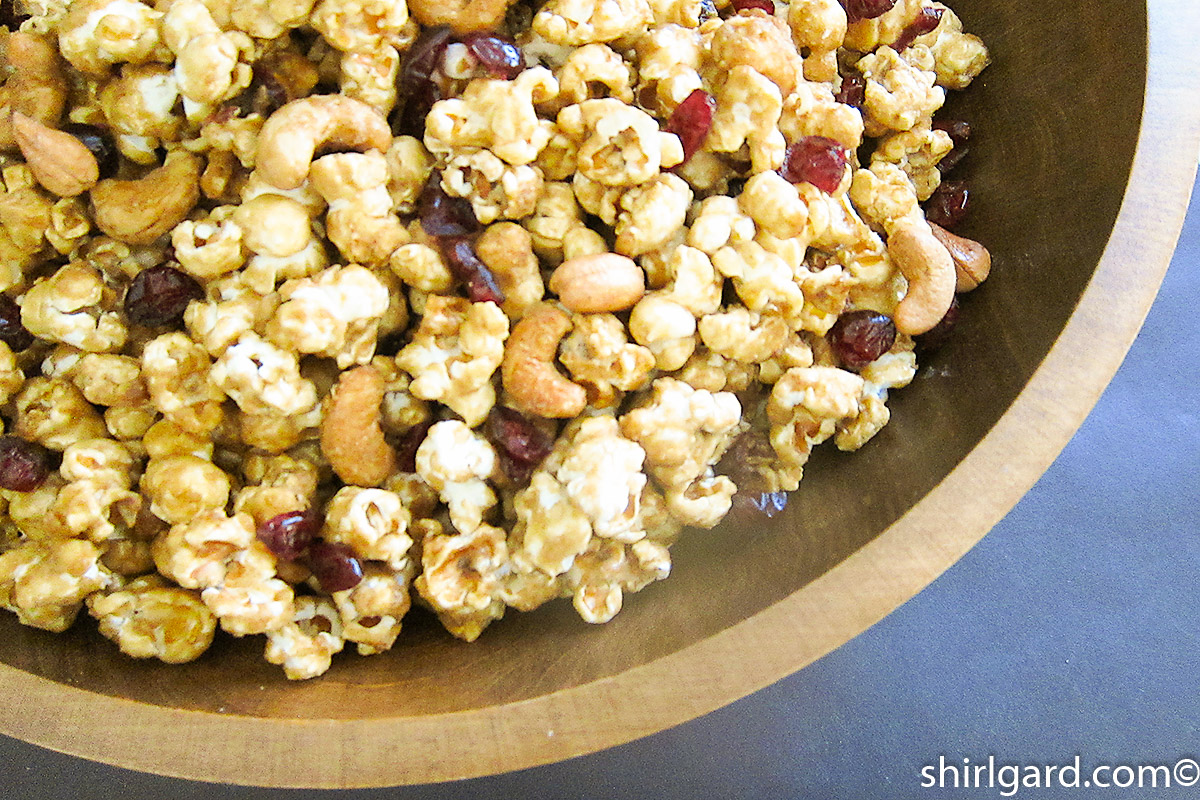 Before I can tell you about the food and hospitality though, I have to tell you about Aunt Jennie herself, and her daughter Co usin Gertrude. They lived in a big old-fashioned (which I now know as Victorian) house with a big wrap-around front porch, on a street full of old-fashioned houses, in a small Nebraska town south of Omaha. They also dressed in a very old-fashioned way: I can still picture Aunt Jennie and Cousin Gertrude, in their long black dresses; the kind from the tuirn of the century that were made out of taffeta or some other fabric that was stiff and shiny. Although eccentric, Aunt Jennie and Cousin Gertrude were extremely hospitable and amazing ladies when it came to food.

When I remember that trip now, many years later, the whole scene seems surreal, even though I know that it really happened. It was like looking through a window and seeing what life might have been like in that big house, in that little town, in the early 1900’s.

When we all came downstairs for breakfast, we would find the most gracious spread you could possibly imagine. You really can’t imagine it. They wouldn’t have just pancakes, or just bacon and eggs, or just anything else. Aunt Jennie and Cousin Gertrude would have all of it, laid out beautifully as a buffet, on a huge table in the center of a high-ceilinged dining room awash with morning light from a big window: dish after dish of pancakes, bacon, sausages, eggs, hot breads, etc. etc. etc. They loved putting out the food that they had made for us, and I do believe that they did all their cooking in those long-sleeved, up-to-the-neck, black taffeta dresses.

I know that the pineapple is an old New England symbol of hospitality from Colonial times, and even though Aunt Jennie and Cousin Gertrude didn’t have a pineapple carved above their front door, as they lived in the Midwest, they themselves were a symbol of hospitality. During our visit, they could not do enough to make us feel welcome and lavish on us their bounty. In addition to the amazing breakfasts, the thing I most remember is that they had food displayed all over the house. At the top of the stairs, you would see a big bowl of popcorn. 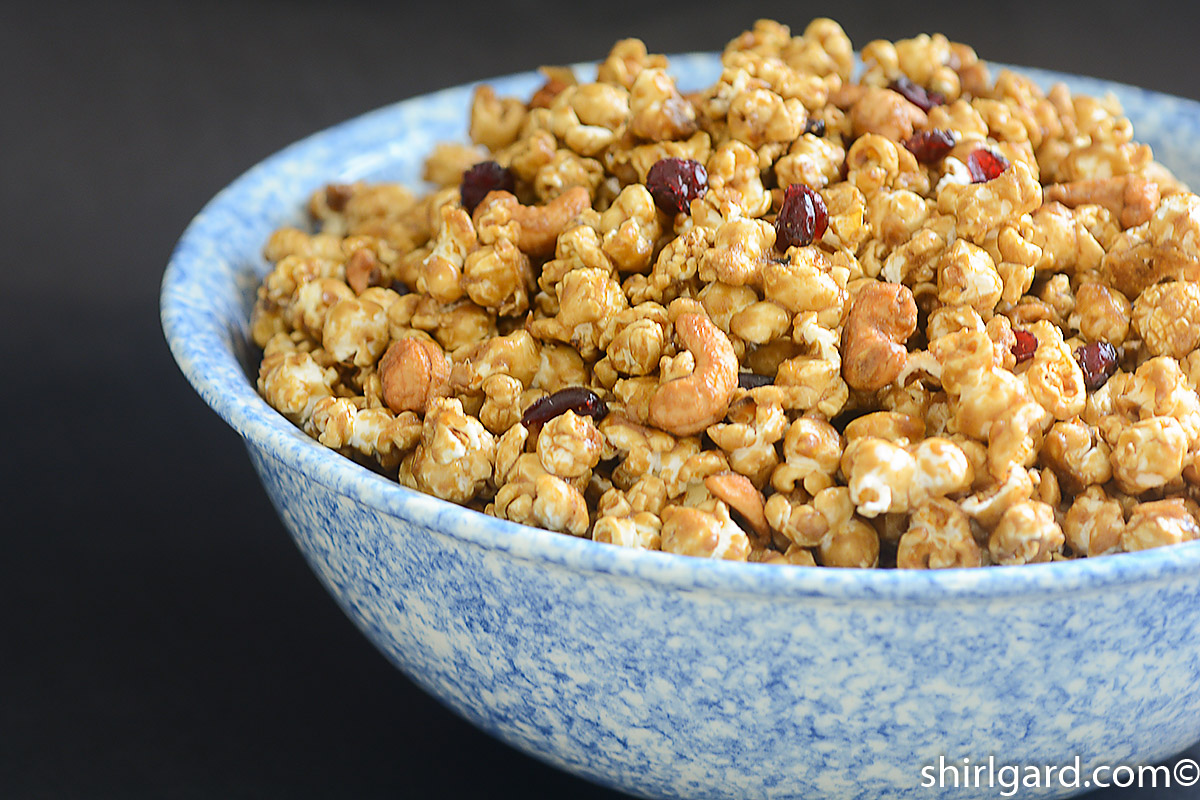 Around the corner might be a bowl of apples. Somewhere else, there would be a bowl of nuts. They liked bowls, big bowls, and they liked spreading around their hospitality in those bowls. 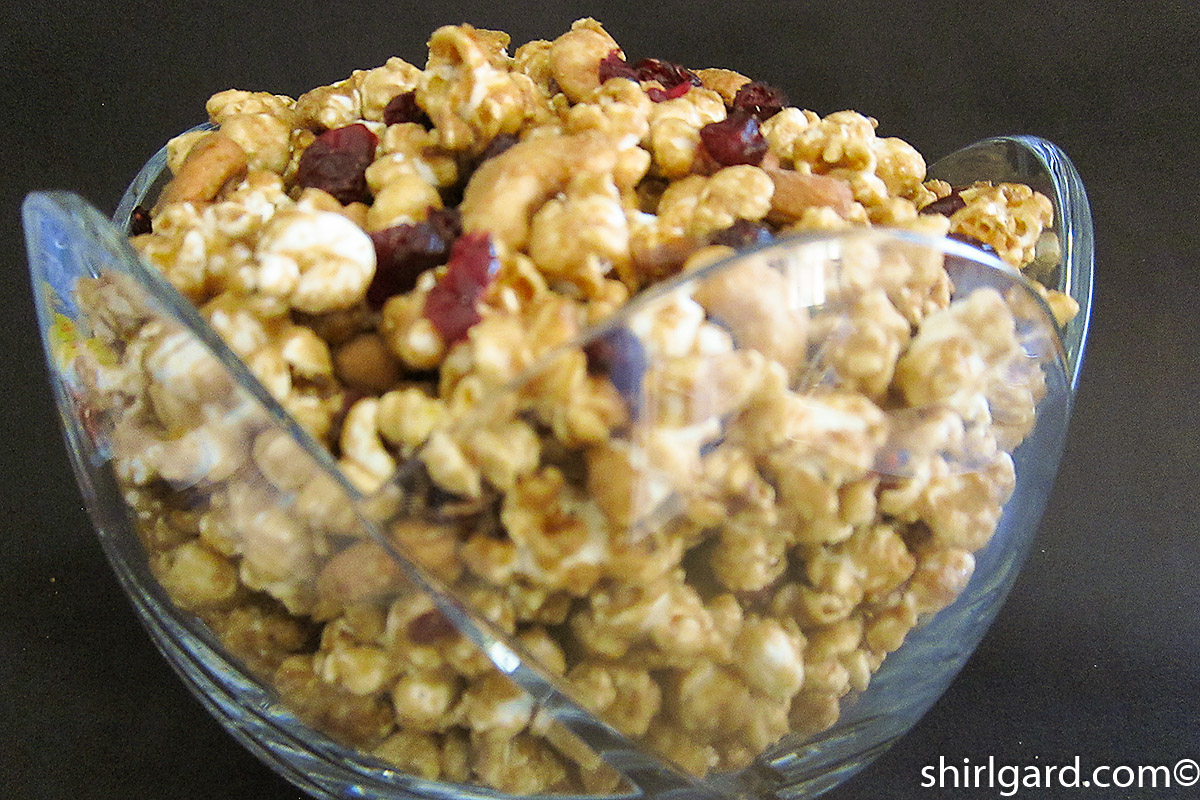 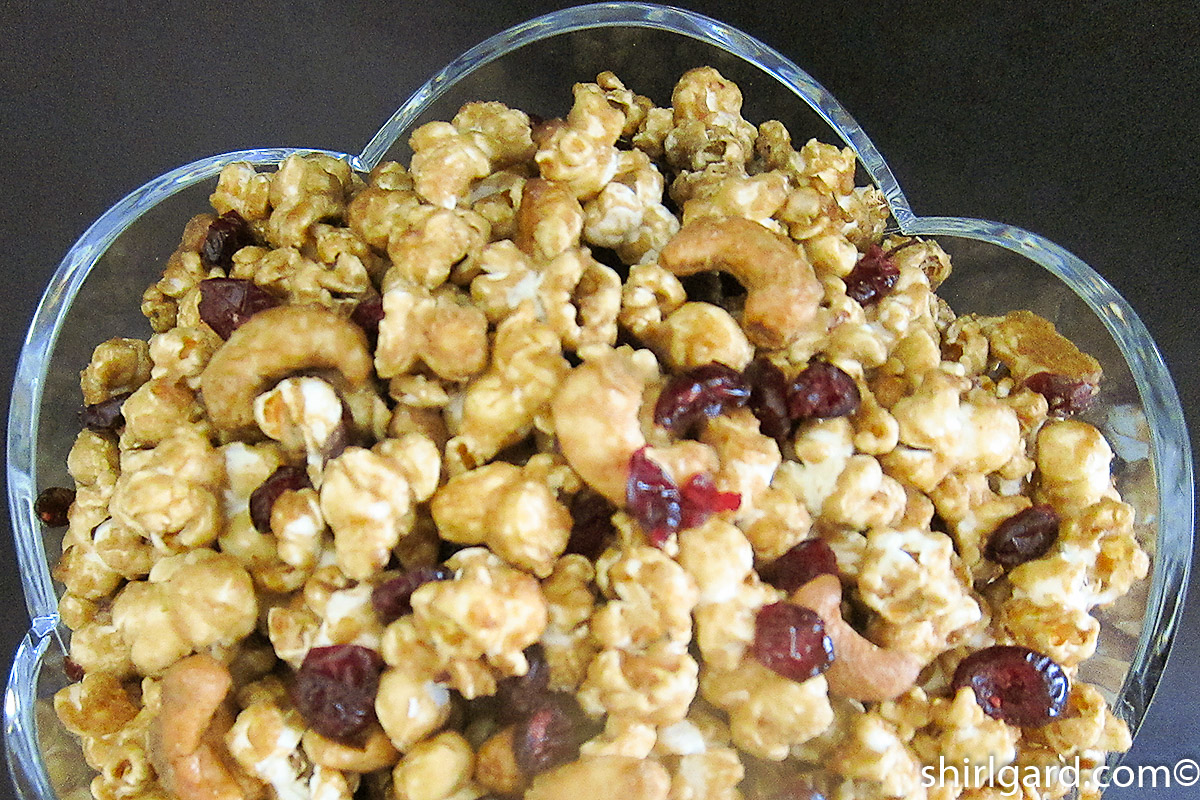 In the spirit of Aunt Jennie and Cousin Gertrude, here is my recipe for Caramel Popcorn with Cashews and Cranberries, a very delicious and hospitable confection, which you can pass around in a big bowl during the holidays. Or, make little individual bowls for holiday table favors or party favors. I love popcorn, and the idea that you can cover each popped kernel with a coating of caramel, and then mix in roasted salted cashews and dried cranberries is even better. 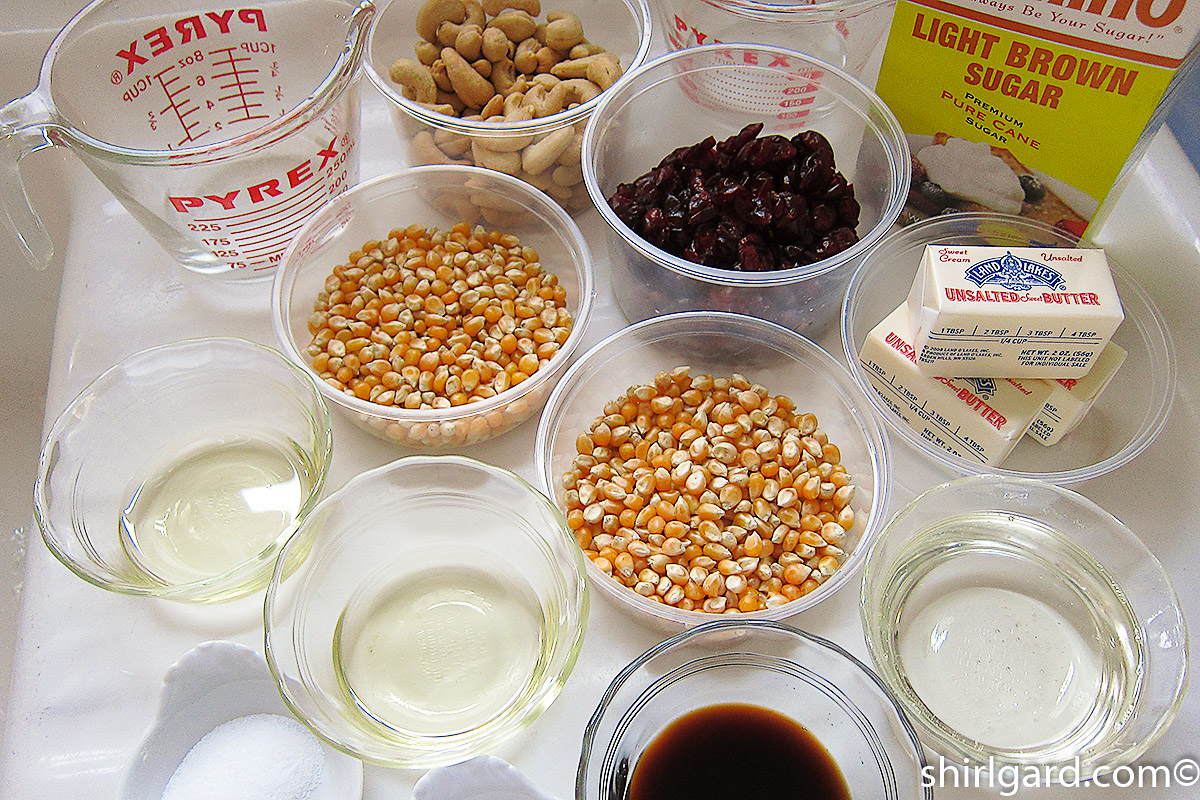 Pop the corn in two batches. Heat the oil until a few kernels pop. 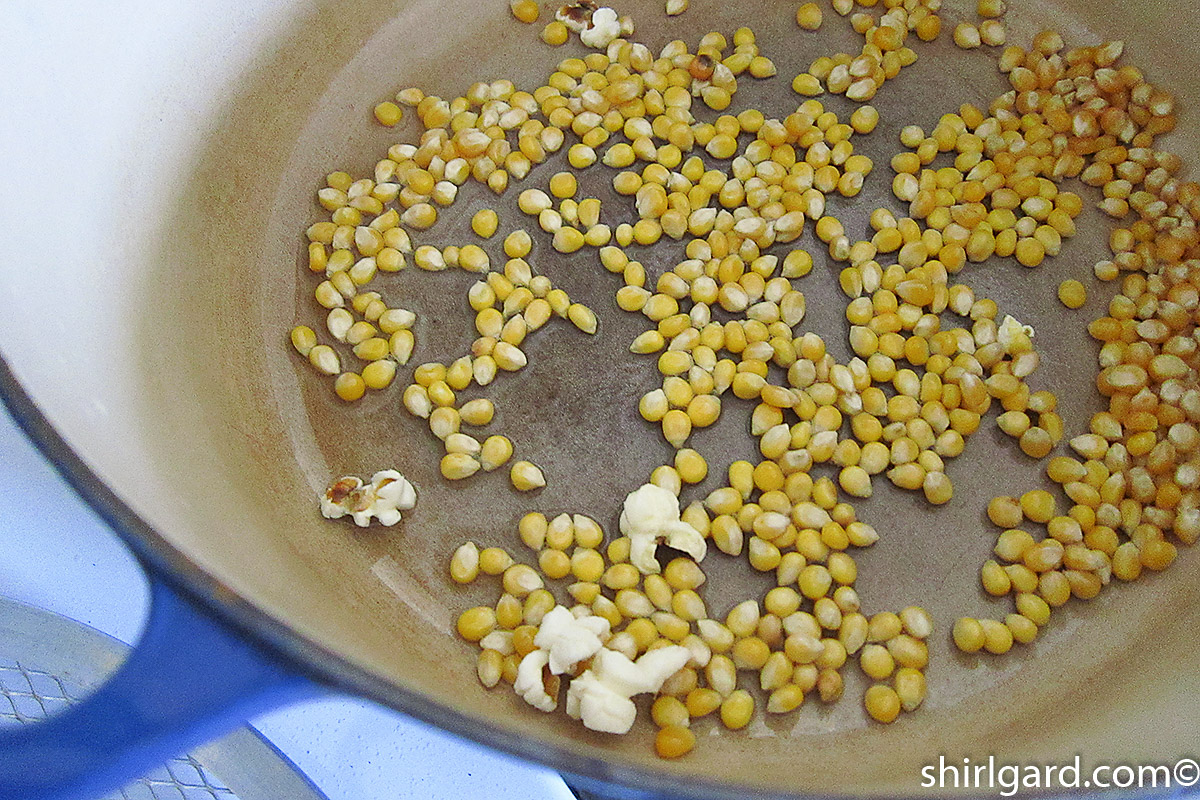 Add balance of popcorn for one batch. 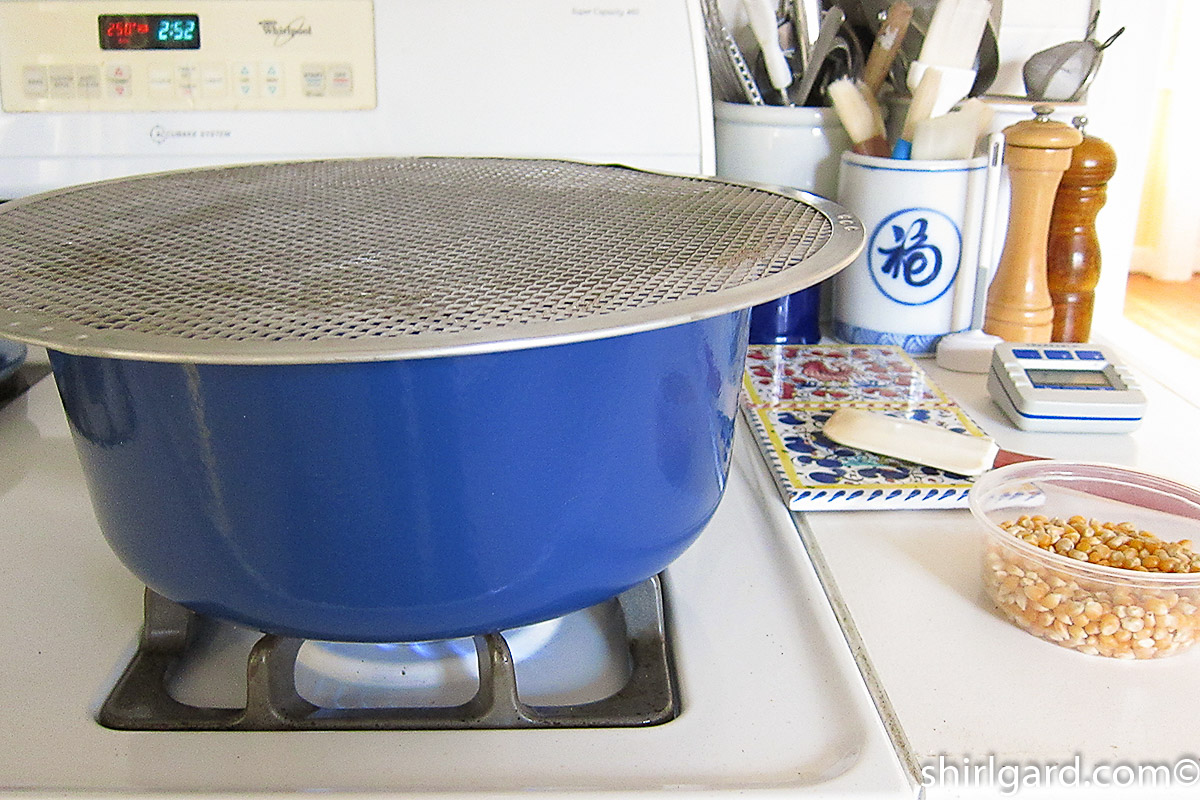 Use a large heavy pot with lid slightly ajar or use a pizza screen. 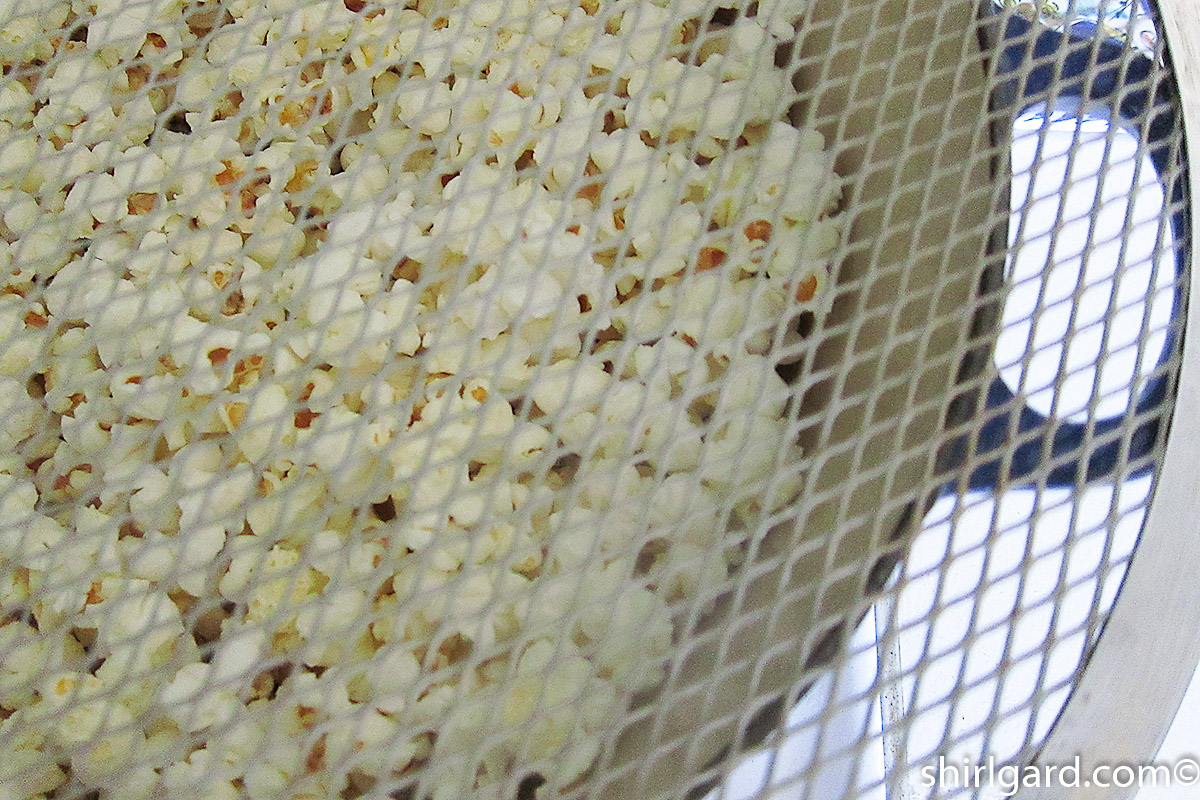 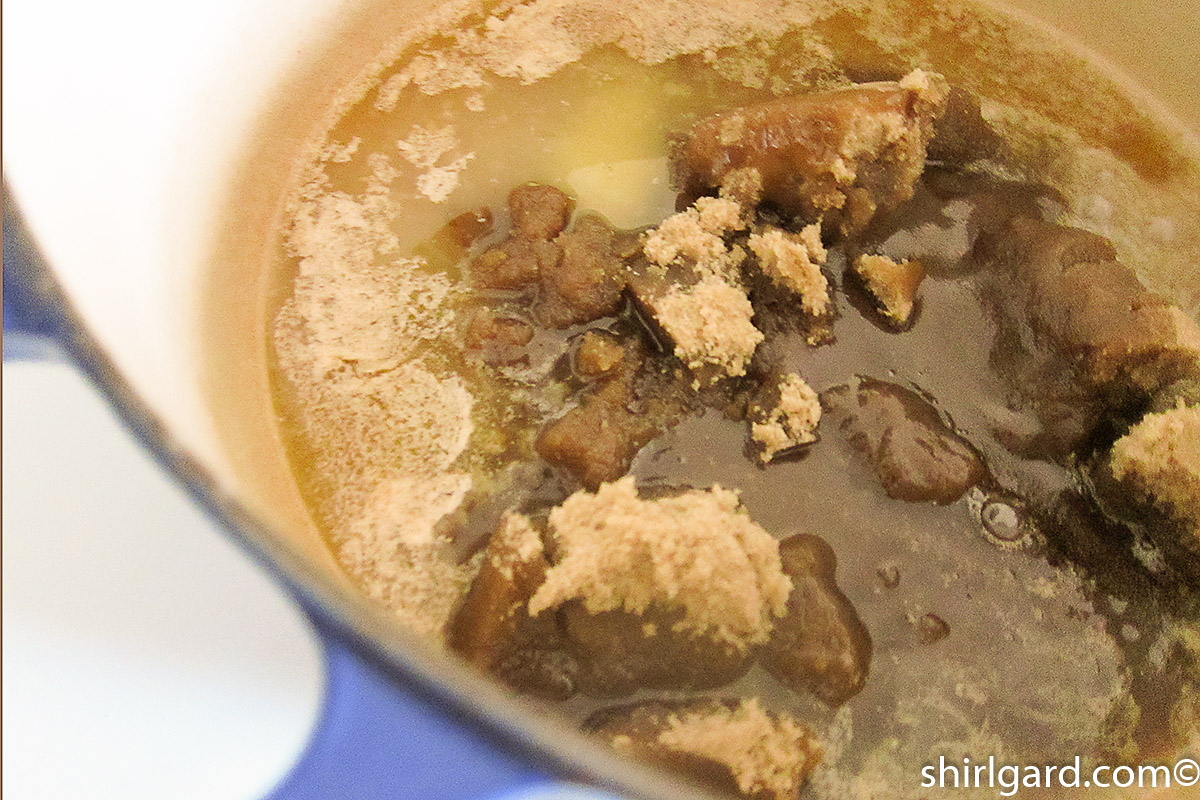 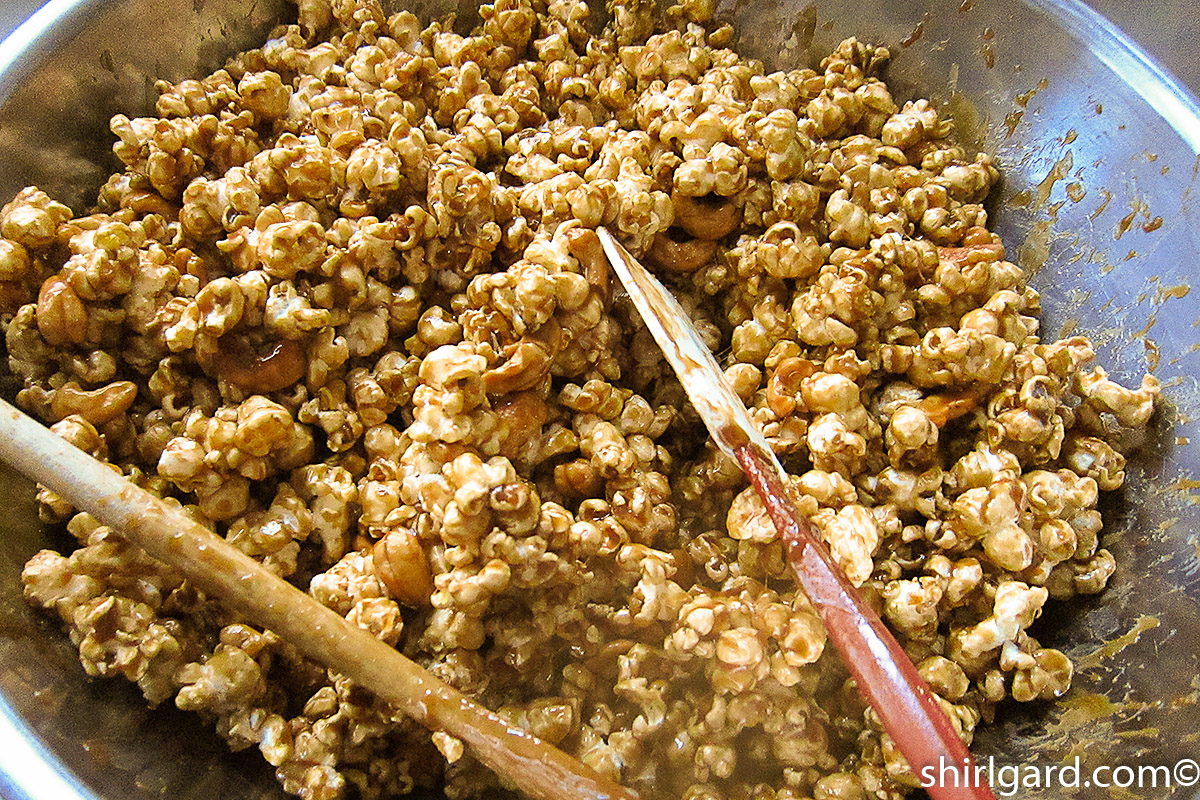 Mix the cooked caramel into the popped corn. 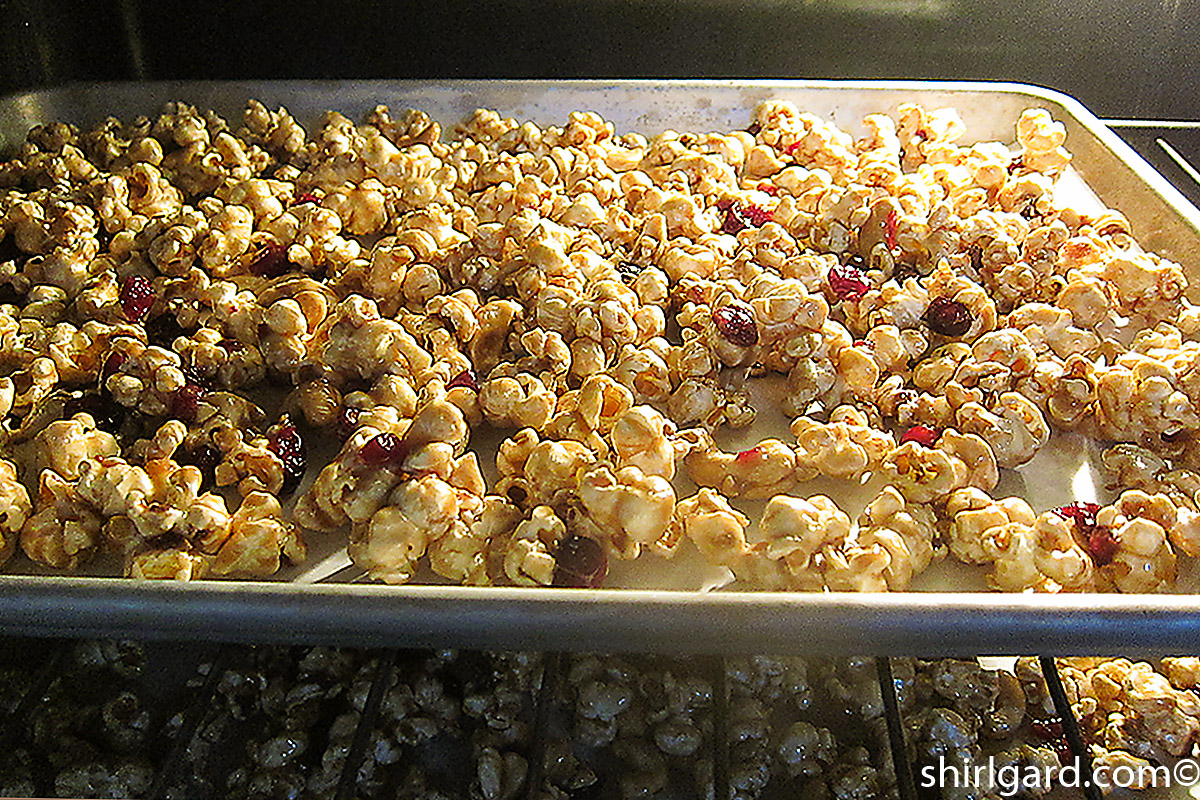 Bake for one hour at low oven temperatures. 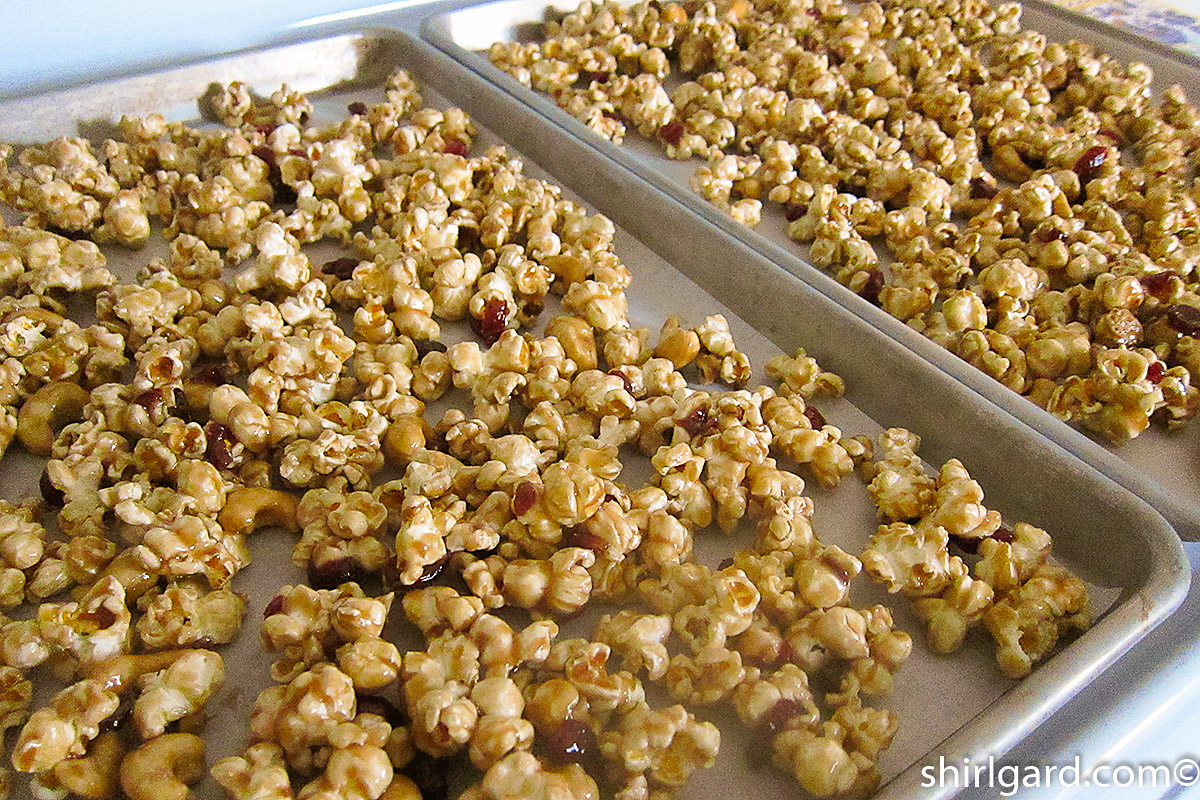 Let cool on the sheet pans. 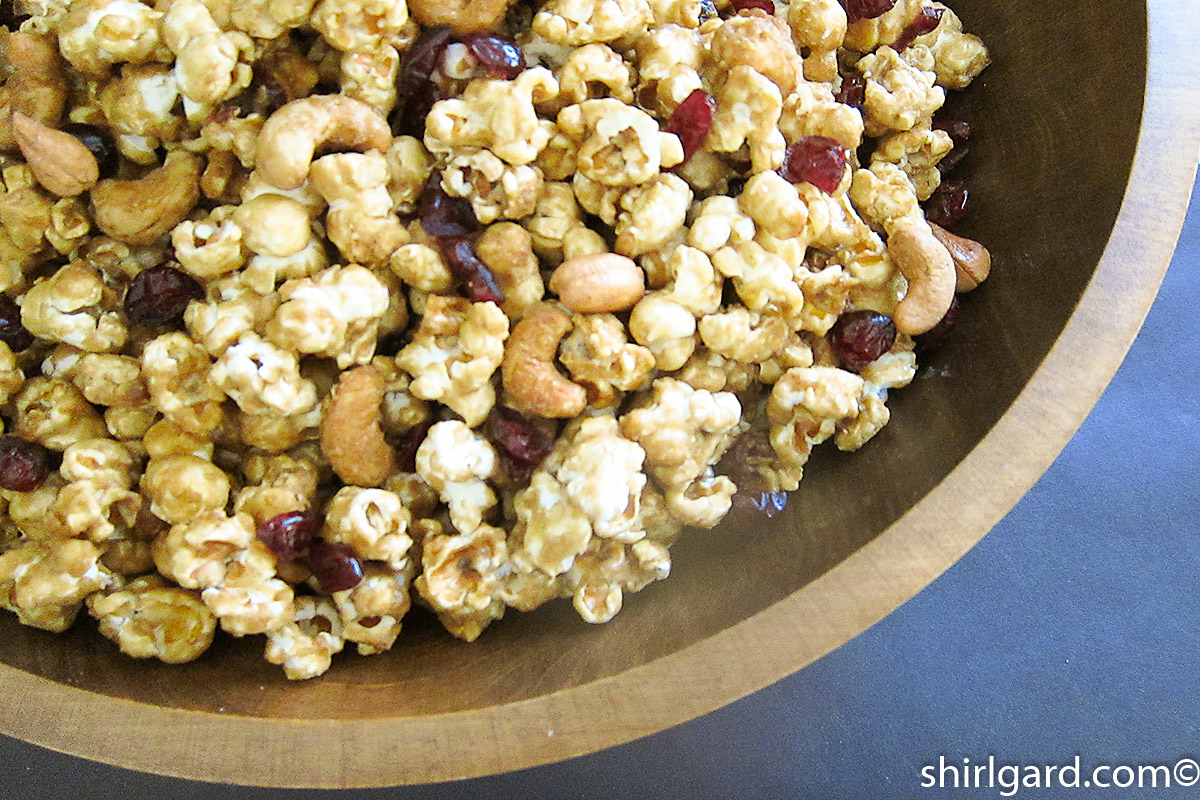 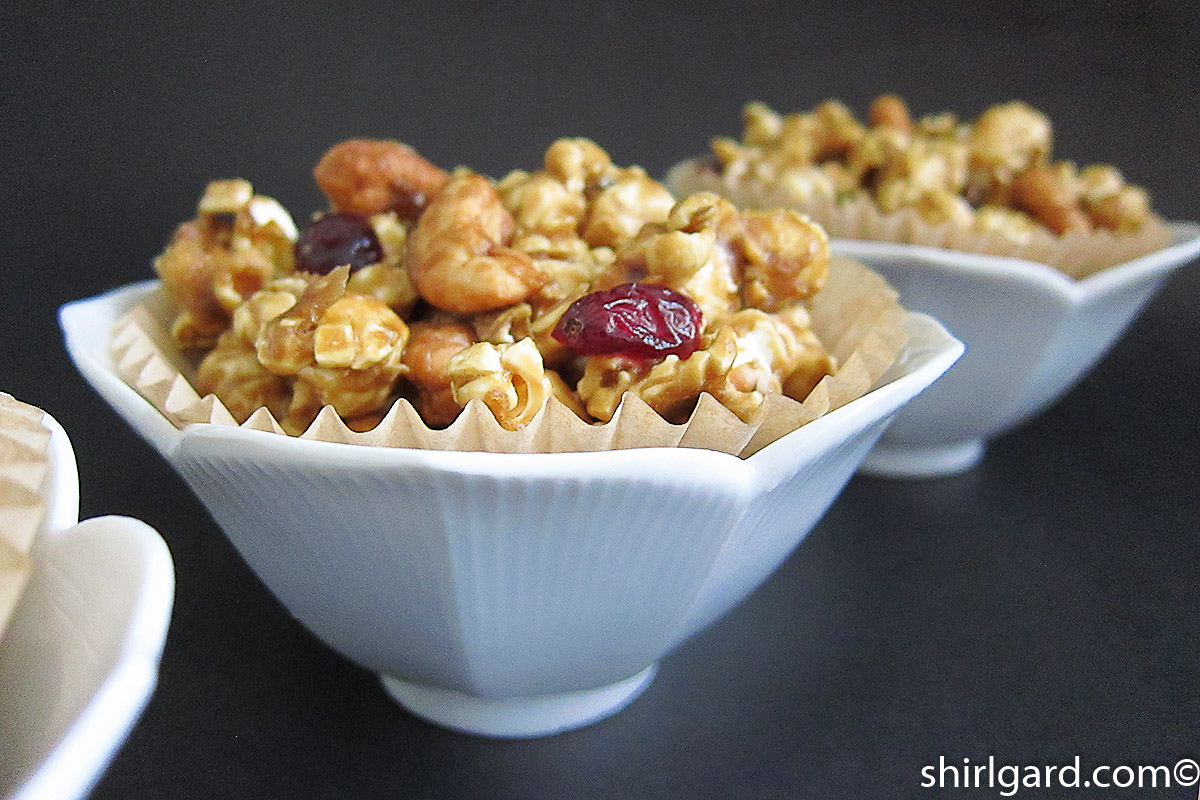 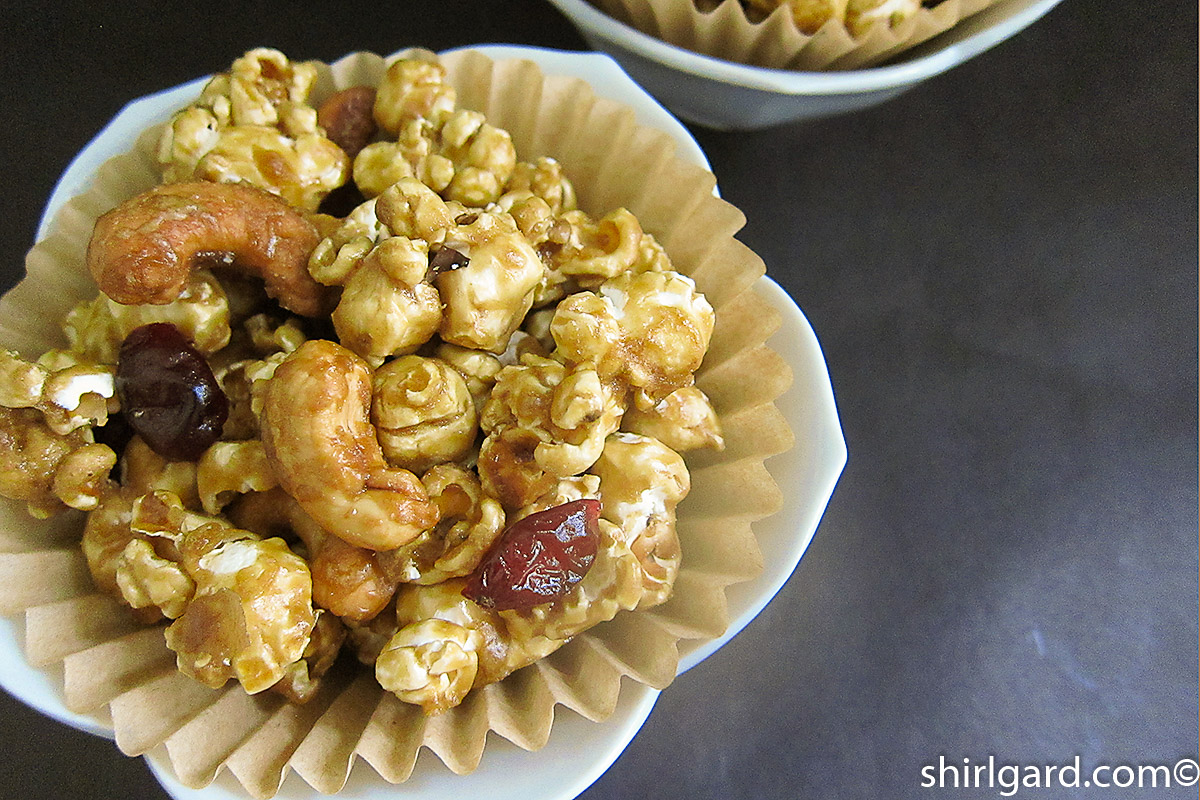 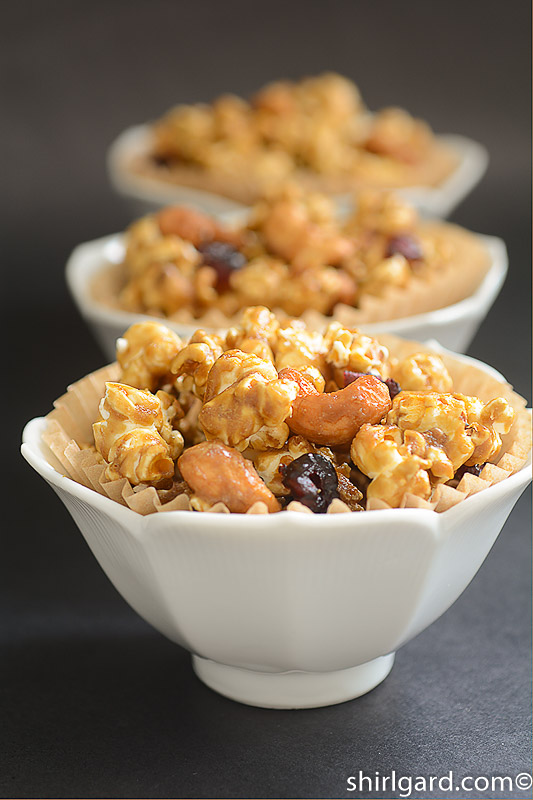 The Take-over of my kitchen by Caramel Popcorn: 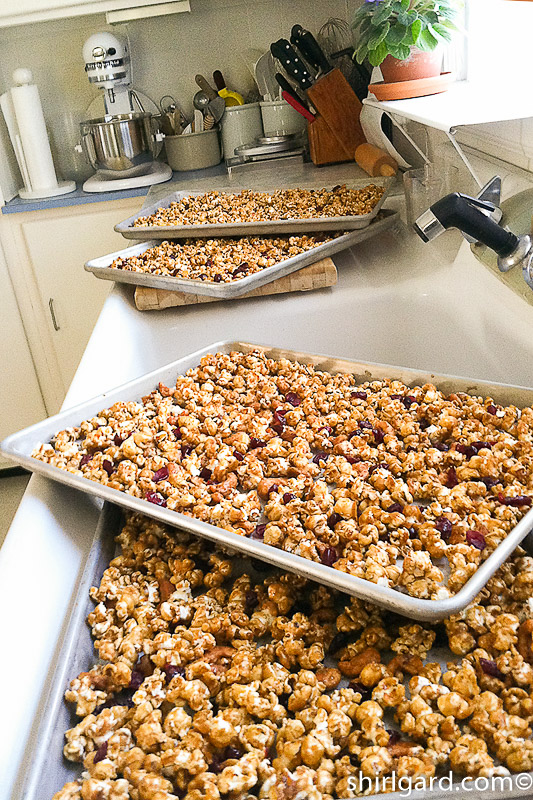 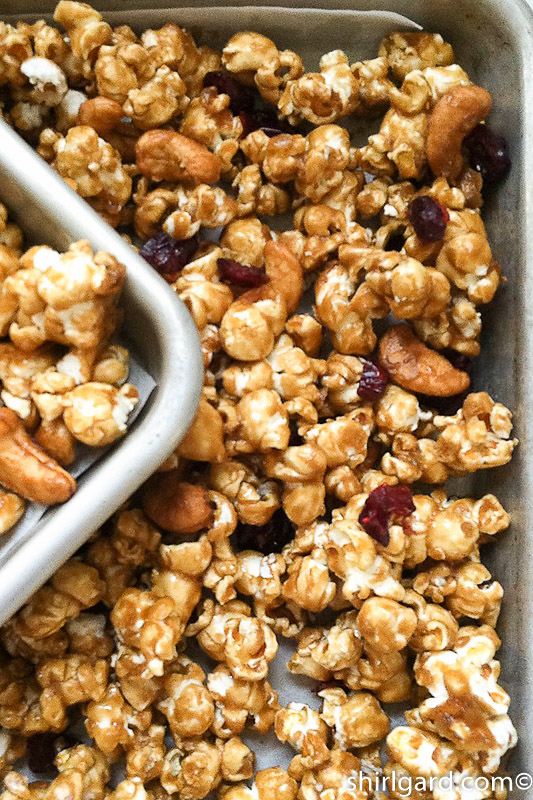 How to Adjust the Cooking Temperature of your Caramel Based on your Altitude: This is a very important step to take when making candies or confections involving cooked sugar.

Use a simple “Boiling Water Test”:

Use a thermometer to determine the temperature at which water boils in your area. Water normally boils at 212° (100° C), but it will boil at a lower temperature depending on your altitude: the higher your altitude, the lower the temperature will be in your “Boiling Water Test”. For instance, water boils at 210° (99° C) where I live, because Lenox, MA is a little bit above sea level (1250 feet). Since the cooking temperature called for in this caramel recipe is 260° F (127° C), I cook my caramel to 258° (126° C), two degrees Fahrenheit (or one degree Celsius) less than the basic recipe, matching the same degree difference in my “Boiling Water Test”. So, for every degree less than 212° F (100° C)  that your water boils, subtract one degree F (or roughly 1/2 degree C) from the recipe. For more information, see the Altitude Conversion Chart (pg. 14) in the source below:

Candymaking by Ruth A Kendrick & Pauline H. Atkinson (1987). This is a very reliable candy cookbook for recipes as well as a great reference book. I have been using it for years. To get a copy of this book: Candymaking.

AUTHOR: Shirl Gard
This confection is one that, as a pastry chef, I have made many many times. It is always a hit, especially during the holidays. Make this! Your family and friends will love it. An added bonus is that it keeps well, at least a month, if you keep it in a tightly covered container or in plastic Ziploc bags. 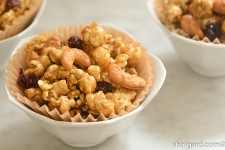